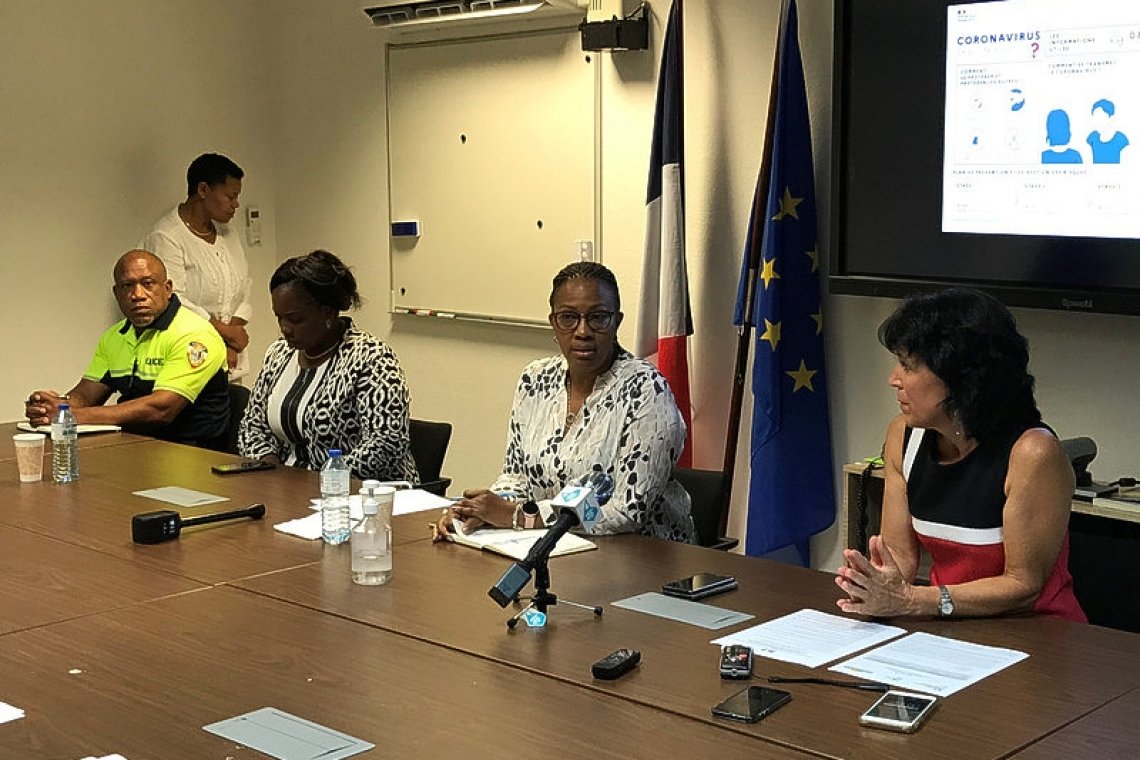 MARIGOT–Dutch-side Prime Minister Silveria Jacobs announced at a press conference Sunday that a curfew will be implemented on the Dutch side from 8:00pm to 6:00am effective Monday, March 30, as both governments tighten up restrictive travel measures internally in response to an increase in COVID-19 cases.

“The total restriction on movement between those hours will discourage any negative behaviour and we have noticed young people on the roads on scooters putting themselves and the general public in danger. We already have a limited capacity for emergencies and we do not want to be filling our intensive care beds because of foolish behaviour.”

By the same token she noted that a vast majority of the population is taking the threat seriously and complying with the confinement rules. She added military assistance has been requested from Kingdom partners but an answer is still awaited.

Taking the cue from the French side, she disclosed Dutch-side residents would also be able to download a waiver document in English to permit essential movement only. Justice Minister Anna Richardson will be signing off on this regulation which goes into effect today, Monday, March 30.

As of 12:00am March 30, movement on the Dutch side is restricted to essential movement only. Movement is only permitted either to go to work or for carrying out essential services. Essential businesses will remain open.

“We are also restricting sale of alcohol by vendors and restaurants while people are waiting for their food to be prepared,” she disclosed. “That has been a challenge for law enforcement and I do thank people who have called in to report when they see people congregating around food vendor locations. Restaurants and vendors will still be able to sell food as long as they are following the rules.

“Any business not complying will be shut down until the restrictions are over. Businesses that do not follow the social-distance rules for customers will also be shut down. There are no more warnings or fines. People who are not social distancing will be sent home.”

Another concern mentioned was complaints that some persons are not complying with their quarantine or isolation and are leaving their homes. The Public Health Department will be issuing these people with a new contract stipulating that if they break the agreement they will be placed and kept in a mandatory facility chosen by government until the restriction period is over.

Of the six COVID-19 cases on the Dutch side, two are in hospital with minor respiratory symptoms. They are on oxygen and not a ventilator. Four others are properly isolated at home and adhering to the protocol. Testing for the virus on the Dutch side will hopefully become possible this week.

Jacobs implored the population to stay at home. “The cooperation between [Dutch – Ed.] St. Maarten and [French] St. Martin is 100 per cent for keeping everyone safe, including visitors who are stuck here. We expect everyone to cooperate so we can keep our numbers low. You have seen how other countries have been overwhelmed. We are only 37 square miles. It can take just one person not following the rules to create a very serious situation here.”

Préfète Déléguée Sylvie Feucher acknowledged that she and Prime Minister Jacobs are concerned by the increase in cases on both sides of the island.

“We are doing everything we can not to [take] that step of closing the border. That is why we have increased joint controls by Gendarmes and the Dutch-side police,” Feucher said. “Some people are still behaving irresponsibly by not social distancing. I understand that people have families on both sides of the island but there are too many people moving across the border and this can transmit the virus into families.”

She noted the controls are very useful in revealing how the population is adhering to the regulations. Commandant Stéphan Basso added that joint controls have the advantage of reinforcing the confinement measures in French and English. Feucher appealed to parents to keep their children indoors.

The préfète proposed that the prime minister put further restriction on circulation in both directions and border control, which she accepted. A new préfectoral order will go into effect as of Monday until April 15, when it will be reviewed. Movement on the French side will be limited to only two exemptions: an urgent medical reason or a professional (work) reason.

She said she did not see the need for a curfew on the French side at the moment.

Feucher thanked the prime minister for permission to use Princess Juliana International Airport (PJIA) for medical evacuations as Grand Case Airport cannot be used in the evenings. Jacobs disclosed non-COVID-19-related acute cases would be sent to Colombia.

When asked why the French side was having more cases than the Dutch side, the préfète replied it was because of more testing being done.