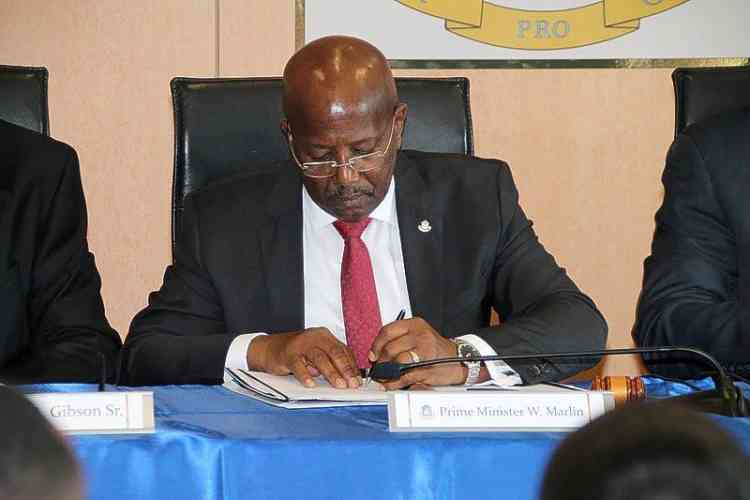 Prime Minister William Marlin said that the first thing he did on Friday morning was call State Secretary of Kingdom Relations, Mr. Knops after receiving news that the Dutch government had taken a decision on the Recovery Fund and on the amount of 550 million Euros in recovery aid to Sint Maarten.

This is great news, he said, and he expressed a big Thank You to the government and people of the Netherlands for the relief aid received so far, amounting to over 50 million Euros and now the decision to establish the Recovery Fund with no less than 550 million Euros. Marlin said he hopes to welcome State Secretary Raymond Knops personally to the island and thank him in person on behalf of the government and people of our country when he visits sometime later this month.

With this decision the recovery of Sint Maarten can now start to take shape. We have always been ready and prepared to work with the Dutch government.

The outgoing Sint Maarten Prime Minister reiterated in a press statement on Friday as well, that his government had NEVER refused aid. We have been accepting aid from the Netherlands, from before the hurricane made landfall up to and including today.

We have also NEVER turned down aid in the form of the Recovery Fund. What we had a dispute with the Netherlands about was the conditions that the Netherlands had attached to receiving recovery aid. The Prime Minister said that a deadline had been set for accepting the conditions, which was October 31, 2017 and the government agreed to the conditions on October 30, 2017, one day before the deadline.

On Thursday morning the Prime Minister received the advice on the final draft of the Integrity Chamber Ordinance and he immediately convened an extraordinary meeting of the Council of Ministers to approve the advice so that the Parliament could take a vote on it before the end of November.

Marlin, said that shortly after the devastation caused by Hurricane Irma, the Dutch government and the Council of State had been informed of the situation on St. Maarten and had requested extra time to finalize the approval of the draft ordinance.

It is a pity he said, that others misused the hurricane to their political advantage to break the government. St. Maarten does not deserve political instability at this time, all hands should be on deck securing a sound recovery of our country.

Attempts by both himself and Minister of Education, Silveria Jacobs to bring the other parties together and form a national government all in the best interest of the people has been met by resistance by particularly one party.