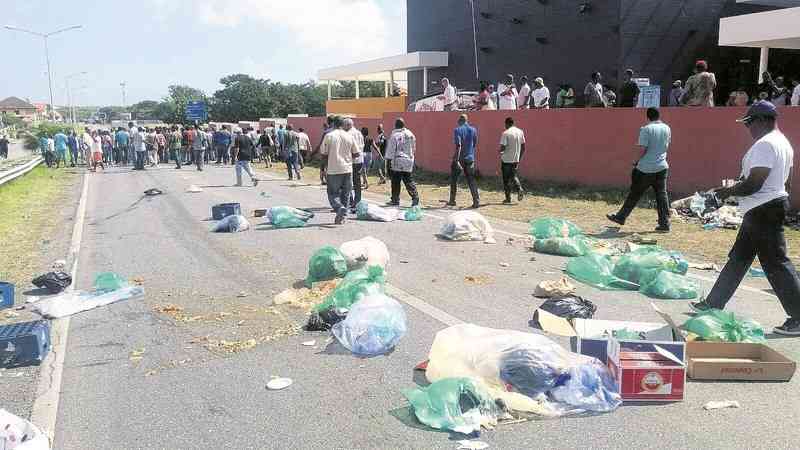 WILLEMSTAD–Prime Minister of Curaçao Eugene Rhuggenaath said in an interview that he doesn’t understand what the labour unions conducting protest actions still want to achieve.

“As a Government we have met their demands on all three points [minimum wage, car insurance, redundancies at UTS – Ed.]. I really don’t know what more they want. I don’t understand the purpose of their fight,” said the Prime Minister.
The actions of 15 unions joined in “Solidaridat Sindikal” continued Thursday. Demonstrators gathered during the morning at the building of Petroleum Workers Federation Curaçao (PWFC) on Schottegatweg.
The action committee did not want to comment about what they would do, but only talked about a new strategy referred to as “Plan C.” In any case the actions will be harder than until now, said Alex Molina of the committee.
It soon became clear that blocking roads in several locations was part of Plan C. Police detained two drivers after three dump trucks were used to hamper traffic at Wilhelmina Park.
The protestors then gathered at the Rio Canario police station to demand the duo’s release. A commotion ensued because officers would let only one instead of three representatives of the unions inside to meet with management and a person even fainted as tempers flared.
The street at PWFC’s headquarters was blocked with trash, while gravel had been thrown onto Caracasbaaiweg. A garbage container in Santo Domingweg was set on fire as well.
The trade unions had hoped that more people would respond to their call to protest because there was no massive presence on Wednesday. “We are reaching out to not just our members but all employees,” said Molina.
The turnout was indeed bigger on Thursday as some 100 members of UTS union Sitkom showed up. Board member Eitel Hato said many only now realise the fight is for them.
According to Molina the unions are still prepared to consult with Government, but the ball is now in their court. “They have to come up with something and hopefully soon, because the longer the actions last, the more desperate the people become and the greater the danger that it gets out of hand.”
This is what the Prime Minister says he does not understand. In his opinion Government has agreed in large part to the demands and invited the unions for a dialogue. Instead of talking, the unions choose to hold actions disrupting public order.