Home Local News Prime Minister Rutte: ‘All will be better off’’ 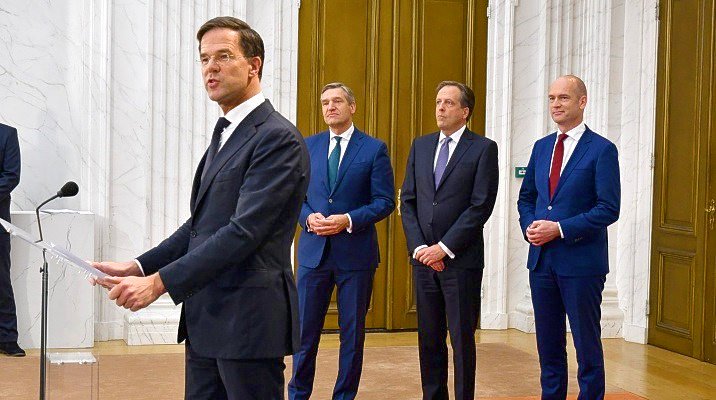 THE HAGUE–All groups in society in the Netherlands will be better off in the coming years, Prime Minister Mark Rutte said at the presentation of the new coalition government’s plans.

The 70-page agreement, thrashed out over a 4½-month period between two Liberal parties VVD and D66 and two Christian parties CDA and Christian Union, is “ambitious and balanced,” Rutte told reporters at a press conference within the parliamentary complex on Tuesday.
“We have put together a package that will ensure that everyone in the Netherlands will be better off,” Rutte said. “More money for those employed, for the elderly, for neighbourhoods and for children. This is an agreement from which the normal, ordinary Dutch person will really benefit.”
The new coalition will shake up the income-tax system by cutting the number of tax brackets from four to two from 2019. The change will cut the tax bill of someone earning 40,000 euros by 1,200 euros a year, but middle and high earners will benefit most. In total, the tax cuts will cost five billion euros.
The new system will involve an income tax rate of 37 per cent on earnings up to 68,000 euros and 49.5 per cent for all income above that.
Currently taxpayers are charged roughly 36.55 per cent on earnings up to 20,000 euros, 40.8 per cent on earnings up to 67,000 euros and 52 per cent above that.
Paid paternity leave is to be extended from two to five days in 2019 and new fathers will also be allowed to take a further five weeks off at 70 per cent of their regular pay from 2020. Child benefits will go up by a total of one billion euros. The pension system will be overhauled.

Taxes
The new coalition will reduce the rate at which mortgage holders can deduct interest from tax. The deduction will be reduced in four stages of three per cent so that by 2023, homeowners will be limited to a 37 per cent deduction. The current rate is 49.5 per cent. The impact of this on people earning more than 68,000 euros a year will be limited by cuts in income tax.
Homeowners who still have a mortgage pay an extra tax (eigenwoningforfait) every year based on the official value of their homes. That tax is currently 0.75 per cent, but will be reduced to zero per cent to compensate for the reduction in mortgage tax relief. This tax will also be gradually extended to people who have already paid off their mortgages over a 30-year period.
The amount paid in asset taxes will be cut by increasing the tax-free limit from 25,000 to 30,000 euros. Assets include savings, shares, art and second homes.
The parties have also agreed to cut the effective tax rate itself, with is currently around four per cent, well above actual returns booked on savings. The lower value-added tax rate of six per cent will be increased to nine per cent. The lower rate applies to food, books and entertainment and will add 20 euros a month to the average family’s grocery and entertainment bill.
Some form of road pricing will be introduced for road-freight traffic. Energy taxes will go up and the tax on tobacco products will increase.
The new cabinet is to cut the basic rates of corporation tax from 25 per cent to 21 per cent while a tax rate of 16 per cent will be levied on the first 200,000 euros in profits. The cuts are to compensate for other changes which will require companies to spend more on sustainability and reaching climate targets, sources said.
Employers with up to 25 staff members will only have to pay one year of sick pay, rather than two as at present. Employers can employ people on temporary contracts for three years rather than two.
The 15 per cent tax paid by firms on the dividends they pay out to shareholders will go to make the Netherlands more attractive to foreign firms. Some form of tax on royalties and interest will be introduced.

Refugees
Refugees with residence permits will no longer be able to claim welfare benefits or extra help in paying rent and health insurance for their first two years in the Netherlands. Local councils will be responsible for paying for refugees’ housing and health insurance directly, as well as helping them find work and settle into the Netherlands.
While commercial “integration” agencies will remain, the government will impose tougher standards on them.
The four parties have decided it is “legally too complicated” to make changes to the much-criticised amnesty for child refugees, which allows some children considered to be well-rooted in the Netherlands to stay. Eight locations for emergency hostels for rejected refugees who cannot or will not leave will be established. Refugees will only be given residence permits for three years, rather than the current five years.

Education
An extra 770 million euros will be spent on primary-school teachers’ pay and improving working conditions. There will be a stronger focus on good citizenship in primary schools, with lessons about the Dutch national anthem Wilhelmus and compulsory visits to the Rijksmuseum and Parliament. All 18-year-olds will be given a book about Dutch history.
University fees for first-year students will be cut by 1,000 euros to around 1,006 euros. The fee will be cut for two years for students at teacher-training colleges.
Youngsters without any form of qualification that will help them get a job will have to stay in education until the age of 21.

Healthcare
There will be a “broad social discussion” on euthanasia and it will become easier to create human embryos for medical research into serious illnesses. Some two billion euros will be allocated to care of the elderly and nursing homes. There will be no change to the health insurance own-risk payment of 385 euros.
Where crime is concerned, the new cabinet wants to increase fines for repeat offences and serious traffic offences. “Outlaw motorbike gangs” are to be banned.
Prisoners will not automatically have their sentences cut by one third for good behaviour. Instead, the maximum reduction will be two years.
Experiments with regulated marijuana production by licensed growers will be introduced. Pimping will be banned and a licensing system for prostitutes will be introduced. It will become a criminal offence to send revenge porn. Radical organisations that want to undermine democracy will be banned.

Climate
More sections of the North Sea will be earmarked for wind farms. No new homes will have gas heating. The national climate targets will be incorporated into law and by 2030, carbon-dioxide (CO2) emissions should be cut by 50 per cent compared with 1990. All coal-fired power stations will be closed by 2030.
In other policy areas there will be more options to have dual nationality, for both immigrants and emigrants. Youngsters will be given priority in government jobs if they have carried out some form of voluntary community work.
The Government will no longer be requesting people to fill in their sex on official forms when this is not relevant.
Anti-discrimination legislation is to be extended to include handicaps and sexual orientation.
There will be a one-off increase of one billion euros on the development aid budget. There will be a move towards introducing elected mayors.
Some 1.5 billion euros in additional spending on defence and an additional two billion euros for infrastructure, roads, public transport and bike paths are also part of the new cabinet’s plans.