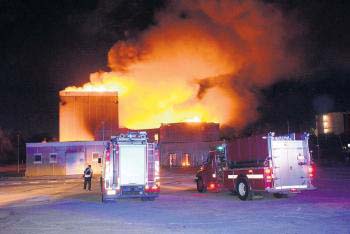 WILLEMSTAD – The Prime Minister of Curaçao Dr. Bernhard Whiteman assumes that the national theatre was set on fire. This is according to his statement during the press conference last night. This is also the opinion of the Minister ofJustice Nelson Navarro.

Whiteman stressed that “Curaçao is not a jungle, and it won’t be one either.” The Prime Minister was referring to the recent actions of the unions representing the oil refinery contract workers. He believes that they are the ones responsible for the fire. “They have the right to strike. It is their fundamental right,” said the Prime Minister. “But we cannot approve their actions now if they are going to burn buildings like our theatre.” 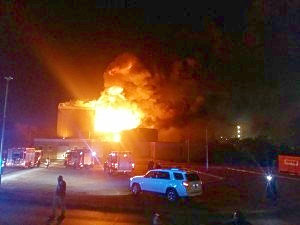 The Prime Minister said that he was shocked when he heard the news and saw the images on television. This is the reason why he has requested from the Minister of Justice to start mobilizing all uniformed personnel to keep the situation
under control. The unions announced a general strike today and according to both the Prime Minister and the Minister of Justice, the authorities will maintain a watchful eye on the actions of the employees and their unions today.

According to Navarro, the authorities will start an investigation and the perpetrators will have to deal with the full force of the law. Right now it is not clear what the consequences will be for the strike and the oil refinery contract workers.