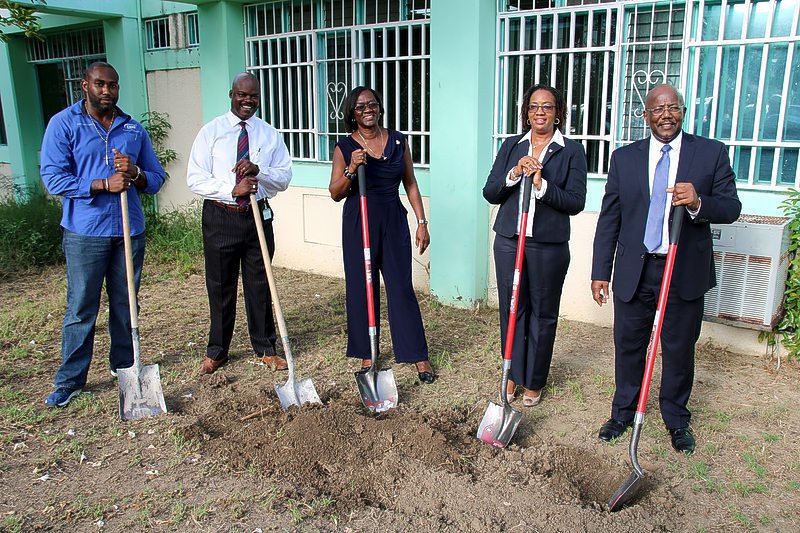 ST. PETERS–Officials broke ground on Thursday to signal the beginning of the reconstruction of Prins Willem Alexander School.

It has been almost five years since serious talks began about exploring ways and means to build a new special education school facility. Minister Jacobs was instrumental in getting the project started during her first stint as Minister several years ago.

Young contractor Eric van Putten of Designer’s Choice NV won the bid to carry out the first phase of the project. The facility will take three years to be completed and will cost close to NAf. 13,800,000.

Head of New Works Kurt Ruan said the demolition of the asbestos sections of the building would be handled by professionals and the community has nothing to worry about. The school has been challenged with a lot of problems and the Health Department provided a report in the past.

“The asbestos will be removed by Royal Haskoning from the Netherlands. A specialised contractor will supervise the removal of asbestos,” he told The Daily Herald. The first phase will cost the government NAf. 2,900,000 that comes from the capital investment budget. The construction will see six sections consisting of eight classrooms.

Public Education Division head Glenderlin Davis-Holiday gave a lengthy address about the project, with a detailed outlook. She said, “Taking the holistic development of our public school pupils into consideration, the school was developed in the 1970s to offer, among other things, a programme that is based on the philosophy that involves educating the whole child.

“This means helping the students gain understanding, not only by acquiring academic knowledge and skills, but through practical experience and the acquisition of positive attitudes and the instilling of pride for self-worth and independence as a valued contributor to the St. Maarten society regardless of the disability.”

Some of the programmes that will be offered at this facility, once completed, are language arts, reading and remedial reading, arithmetic, home economics, general knowledge, hygiene, music, drama, arts and crafts, general care, physical education and computer technology.

A very grateful contractor Eric van Putten said he was grateful to Government for giving him the opportunity as a young man to construct the first phase of the school.

“I was dreaming about this moment for three years, Thank you to all who believed in my company. I remember seeing the Prime Minister a few years ago and asked if he had five minutes to speak to me and he replied I had two minutes to speak to him. I was given the opportunity to head the stone wall project and roadwork in Middle Region and big companies laughed at me, because to them, my bid was very low, but as you can see, everything is still good,” Van Putten said.

Prime Minister Marlin said a few words during the ceremony and remembered the young man asking for five minutes and his reply at the time. He said a compromise had been reached and they had spoken for seven minutes.

Marlin was happy to give the young man the opportunity to work on the project and hopes that it will be done satisfactorily to the terms of reference.

Minister Jacobs also spoke during the groundbreaking. She said she had a dream to create a school for special education and challenged the contractor to finalise the first phase as soon as possible. She thanked persons who had a role to play in the realisation of the facility.

CBCS predicts 14.4 per cent GDP expansion for St. Maarten in 2022 | THE DAILY HERALD

October 24, 2021
0
CBCS President Richard Doornbosch. ~ Warns rebound does not mean sustained economic recovery ~PHILIPSBURG--The real gross domestic product (GDP) of Curaçao will increase marginally by 0.1 per cent in 2021, but will accelerate to 6.2 per cent in 2022. The...
Read more