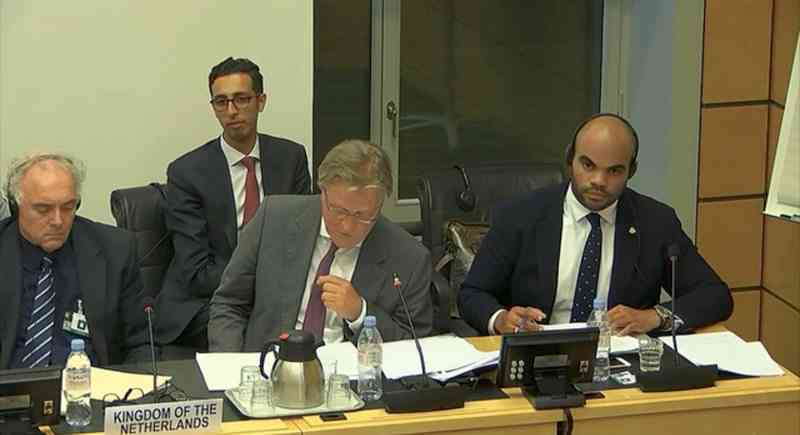 PHILIPSBURG–St. Maarten formed part of the Dutch Kingdom delegation to review its implementation of the provisions of the Covenant on Civil and Political Rights, an International Human Rights Treaty whose signatories promise to uphold and protect the most fundamental human rights.

During the deliberations, the Committee for the Convention on the Prevention of/Against Torture paid particular attention to the status of detention centres and abortion in St. Maarten.

The committee was particularly concerned about reports of inhumane conditions in the Philipsburg and Simpson Bay police cells and the Pointe Blanche prison. Questions were asked about government’s action towards implementing recommendations made by the committee in 2016 and in November 2018 to improve these facilities, as well police violence and inter-prisoner violence.

Questions were also asked on government’s response to the ruling of the European Court of Human Rights (ECHR) concerning the manner of detention of Atlantis Group owner Francesco Corallo and plans to institute a National Human Rights Institute to monitor and report on abuses of fundamental human rights.

In its response, government indicated that it had reported on the existence of the plan of approach that would address pending issues within the justice system, including places of detention.

Hurricane Irma, the strongest in Atlantic history, devastated St. Maarten in 2017, resulting in US $2.1 billion in damages. This amounts to a significant percentage gross domestic product (GDP). Given the reality of being a small island developing country, and the associated innate vulnerabilities such as limited capacity and small economies of scale, the hurricane not only complicated but also delayed an already-difficult and financially-burdensome initiative.

Government indicated that improvements have been made in the Simpson Bay and Philipsburg cells through the Netherlands-funded World Bank-administered Recovery Trust Fund, it was stated in a press release. Improvements include better lighting, remediation of plumbing issues, and partition walls for increased privacy.

“This will ensure a more humane space for detainees, enabling them to adequately rehabilitate and help to mitigate inter-prisoner violence.”

Minister of Justice Cornelius de Weever is currently in discussion with the United Nations Office for Project Services (UNOPS) to execute the plan of approach to improve the Pointe Blanche prison, the main centre for detention in St. Maarten.

The committee was critical of the legal status of abortion in St. Maarten. In its report, the committee indicated that abortion remained illegal in the country and that persons found to engage in or promote it were liable to prosecution.

In its response, government indicated that the Ministry of Public Health, Social Development, and Labour is finalising the Sexual and Reproductive Health Policy. The focus of this policy is to enhance knowledge on sexual and reproductive health rights on a broad range of issues, including addressing the age of parental consent for contraceptives and access to sexual reproductive health services, introduction to comprehensive age-appropriate sexual reproductive health curriculum in schools, and the inclusion and awareness of persons that form sexual minority groups.

The new policy is being devised with multiple stakeholders and has consequently had some delay.

A recurring theme in the hearing was the status of refugees/asylum-seekers in St. Maarten and whether the ratification of the 1951 Convention on Asylum-Seekers would be extended to include St. Maarten, particularly in light of the regional effects of the ongoing crisis in Venezuela.

Government indicated that there were no immediate plans to accede to the treaty, given St. Maarten’s small size and limited human and financial resources. Nonetheless, St. Maarten makes every effort to ensure that persons are facilitated in this regard, it was stated in the release.

“St. Maarten ensures that the policy of non-refoulement, a fundamental principle of international law that forbids a country from returning asylum-seekers to a country in which they would be in likely danger of persecution based on race, religion, nationality, membership of a particular social group or political opinion is upheld.

“It is important to note that part of the requirements for approval of United States preclearance is a demonstrated and clear policy as to how a country, St. Maarten included, handles asylum seekers within its jurisdiction,” the release said.

The committee issued a number of recommendations to the Kingdom, as the entity ultimately responsible for human rights and the legal state party, to allocate financial or human support for the implementation of the treaty Kingdom-wide.

The committee was also very critical of the policy that sought to implement criteria for persons from the Caribbean parts of the Kingdom to move to the European part, saying that it impeded free movement of persons, a provision of the convention, and discriminated between citizens within a state. The Netherlands indicated that these plans had been scrapped.

The Committee will issue its final recommendations this week.

Political responsibility for human rights in St. Maarten lies with the Prime Minister supported by the Department of Foreign Relations, which in turn forms part of the Human Rights Platform, an inter-ministerial work group within government that deals largely with the country’s reporting responsibilities. In addition, the Platform acts as a monitoring body that ensures proposed policies within the various Ministries are in line with or strive to conform to international standards.