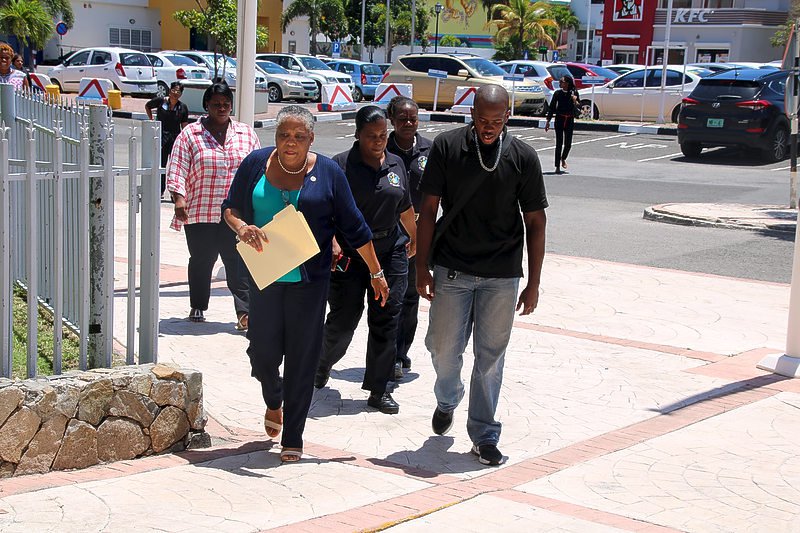 ~ Unions remain mum about demands ~
PHILIPSBURG–Prison Guards at the Pointe Blanche prison are up in arms over the functioning of Director Edward Rohan and demand that he is removed. Guards decided not to show up for work on Thursday morning and made their way to their union instead. They are represented by the Windward Islands Civil Servant Union/Private Sector Union (WICSU-PSU)

Unions NAPB and ABVO were also represented in the meetings with the guards. Shortly after 12:30pm the House of Detention workers marched to the Government Administration Building to book in their letter with demands for Minister of Justice Edson Kirindongo who was off island and is returning to the island Today, Friday.

Prime Minister William Marlin attempted to intervene and hear the grievances from the workers when he visited the WICSU headquarters but received resistance from the guards who informed the prime minister that he was not welcome at the talks.

WICSU-PSU President Julia Solognier refused to give details about the demands from the workers and said no information will be given out until it has been ironed out with the Minister of Justice. After the letter was booked in at General Affairs, workers were told by union representatives to get back to work.

Crisis at the prison
Management sounded the alarm on Thursday morning when they noticed that none of the guards came to the morning shift. Management contacted Minister Kirindongo who was informed about what was taking place.

A plan of action was immediately worked out and the Voluntary Korps (VKS), Marines and Police were called to assist with keeping the order at the prison. Breakfast was given out in time and lunch was served thanks to the assistance from the Special Forces.

Prison Management tried to keep the peace between prisoners who became a bit rowdy when they learned of the news that prison guards were on strike.

One prison guard told this newspaper that House of Detention Director Edward Rohan has to be dismissed from his position before they agree to go back to work. From 8:00am, Thursday morning, guards and the union mapped out their grievances on paper before going to the meeting at 12:30pm.

The Prison was rocked by its first murder on Wednesday, August 31, when Omar Jones was gunned down by a fellow inmate outside his cell. Guards indicated to The Daily Herald that Rohan does not know how to run the prison properly.

In an invited comment on Thursday evening, Minister Kirindongo said, the union had not provided a copy of the demands to him via email or to his cabinet. “When a letter is booked in at General Affairs, it takes about two days before it gets to where it needs to go. I still do not know formally what the union demands are,” stated the Minister.

“I would like to thank the Union for sending the guards back to work after they delivered the letter. It shows that the union knows the importance of the job of the guards. I will do what I can once I get the demands,” added Kirindongo.

There is no indication if there is a deadline or what the ministry should focus on first. Cabinet members of the Justice ministry contacted the union and requested a copy of the demands and the union informed them that a copy will be provided to them on Friday morning.

Minister Kirindongo went on to thank the prison guards who went back to work for their 3:00pm shift. “Guards are not willing to make damages to get attention for their concerns and it should be commended. I know what it means to have grievances as I once was a civil servant,” said the minister.
Gratitude also goes out to the VKS, Police and Marines for their assistance in this matter, concluded the minister.
Source: Daily Herald
Prison guards want Edward Rohan gone