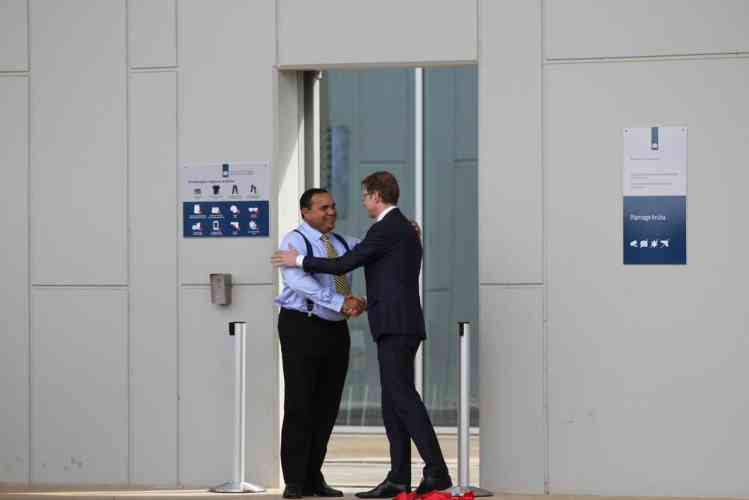 Dutch Minister of Legal Protection Sander Dekker (right) and Bonaire’s Island Governor Edison Rijna (left) performed the official opening of the new prison in Bonaire on Tuesday. Photo courtesy of the Ministry of Justice and Security.

The new prison has space for 113 inmates and 10 detainees. It is the only judicial institution in the Caribbean Netherlands and houses convicted criminals of Bonaire, St. Eustatius and Saba. The prison, located on Plantation Aruba, has been operational since August and is already filled to capacity.

“I am content that with this new building we can again comply with the requirements of a modern prison. In this way, we can make the islands a safer place, while inmates get the opportunity to make something of their lives after their return in society,” said Minister Dekker at the opening ceremony.

“At least 99 per cent of the people who are locked up here will be returning to society. With this prison and its approach, we can limit the number of repeat offenders by offering people a second chance and making sure that they can contribute to the community in a positive manner,” said Island Governor Rijna.

Inmates will take part in the work and training project named “Let’s Go for Change” (“Ban Pa Kambio”) in which the participants are readied for life outside the prison walls in several phases. If needed, the inmates will learn to read and write, they can take courses on a middle vocational education MBO level and entirely focus on the working life in the last part of their sentence.

Prison Director Wibo de Vries explained that the inmates can receive education in four fields of expertise. There will also be a lot of attention for increasing the inmates’ chances on the labour market. “Work is the key to success in society,” he said. Just as in the Netherlands, the attitude of the inmates will be a determining factor: they can advance from the basic programme to the plus programme which earns them less restrictions and more freedom.

Minister Dekker expressed his appreciation for the prison personnel. He had the opportunity to observe the prison personnel during an extensive visit to the penitentiary the day before the official opening. He said he was impressed by their professionalism.

“This prison is of an extraordinary class and by and large complies with the international requirements. That is not only the building, but especially an institution with well-trained personnel who are knowledgeable and dedicated to guide the inmates,” said Dekker.

According to Rijna, Bonaire sets a good example for the region with this prison.

De Vries said JICN will continue to work closely with the other Dutch Caribbean islands to provide assistance when asked.