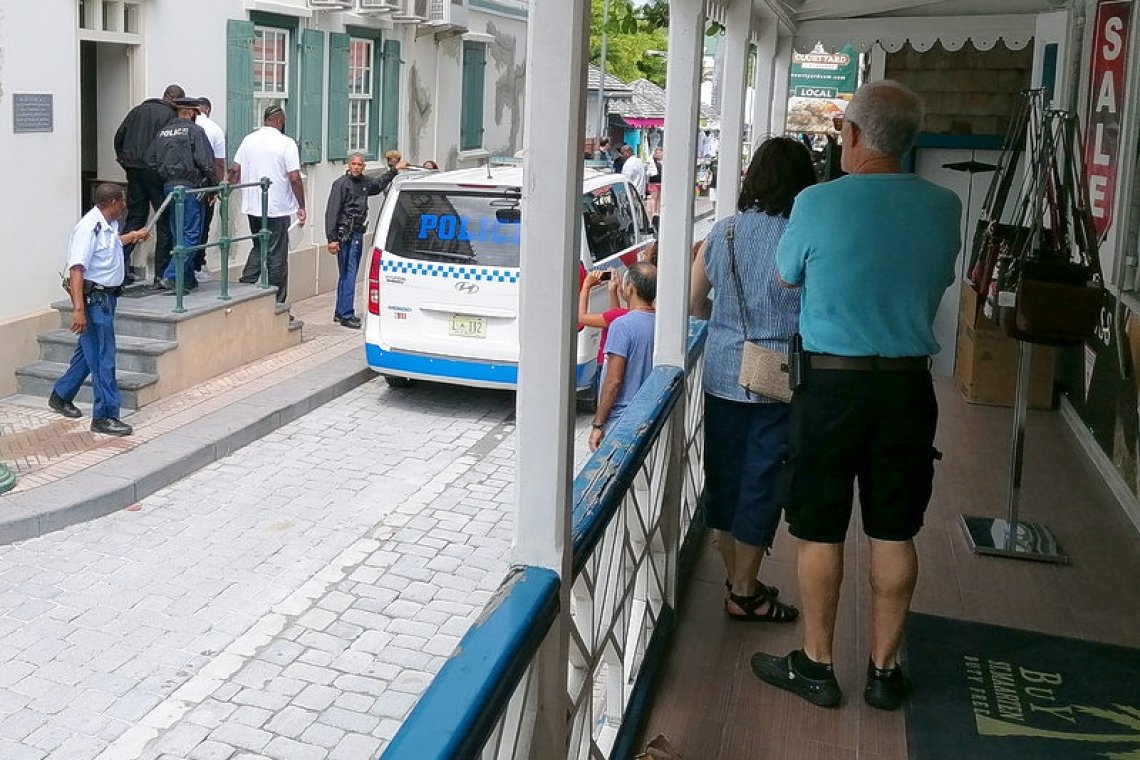 PHILIPSBURG–The Prosecutor’s Office demanded 22 years in prison for two men suspected of having shot and killed a man and seriously injured another during an altercation outside El Capitan adult entertainment club in Sucker Garden on December 31, 2018.

Their lawyer pleaded for both men’s acquittal and dismissal of all prosecution, as he claimed during Wednesday’s Court hearing that they had acted in self-defence.

The judge will give his opinion on March 11.

Suspects in the so-called “Thorium” investigation D.J.E.O. (25) and S.R. (20) walked into the police headquarters on January 2, 2019, and surrendered to police who had been searching for them since the “Old Year” shooting took place. They were both immediately arrested and placed in custody for further investigation.

One of the shooting victims, M.M. Gomez Lopez (28), died at the hospital emergency room. The other victim identified as W. James, who was wearing a bulletproof vest during the incident, sustained injuries to his legs and arm. Gomez, who was shot in his back, sustained six bullet wounds. James was shot no fewer than 10 times.

The prosecutor stated that (attempted) murder could not be proven but said that both defendants should be sentenced for (attempted) manslaughter and for possession of illegal firearms.

According to the prosecutor, the defendants tried to put the blame on the victims, but Gomez was drunk and did not pose a threat to the suspects, who were agitated and angry.

Both defendants pleaded self-defence, as they claim they had been threatened in and outside El Capitan where they had been enjoying themselves while celebrating the New Year with some friends.

They had told the police that they had taken the firearm from the deceased victim during a skirmish and an angry exchange of words and had fired at him. However, in front of the judge they claimed that both victims had been armed when they were shot.

The Prosecutor and defence lawyer Eldon “Peppie” Sulvaran both showed video-surveillance-camera images in the courtroom. These revealed that the men involved in the shooting had had a number of “unfriendly” exchanges during the last night of 2018.

However, the agreement ended there, because the prosecutor’s and the lawyer’s interpretations of the images were diametrically opposed. According to the prosecutor, the two suspects were the aggressors in this case, but according to the defendants and their lawyer, they had been threatened and harassed throughout the night, as Gomez apparently believed that O. had been involved in the death of his “homie”, who had been killed at another adult club two weeks earlier.

Lawyer Sulvaran went to great lengths in explaining to the judge what had happened in and outside the club prior to the shooting incident and how his clients had been harassed, followed at every step and “repeatedly” threatened with their lives and told they would not be leaving the club’s parking lot alive.

Knowing their assailants were armed and that one of them was wearing a bulletproof vest, both suspects said they had been confused and puzzled about the allegations and frightened too, which had given them no other choice but to shoot.

Defendant O., who has a criminal record, told the Court that his house had been shot at three times and that he had been injured once. He said he believed that “the system” was not on his side, as he had reported the incidents to the police, “but no one was ever arrested.”

He said it had not been his intention to hurt or kill anyone. He said he had wanted to “make it home” safely. “It happened so fast. You’re in survival-mode,” the entertainer and construction worker by profession told the judge.

His lawyer claimed his clients’ defence had been “proportionate,” as they had been threatened with violence and had been acting out of panic and fear. “My clients should not be held accountable for the escalation of violence. They did not seek a confrontation, and regret the turn of events,” Sulvaran said in calling for a “humane” sentence for O. and his close friend R.

Relatives of the deceased victim, among them his mother who had travelled from Saba to attend the hearing, observed the proceedings from the public gallery, which was filled almost to capacity. Attorney-at-law Geert Hatzmann filed for damages on her behalf to the tune of almost US $22,000.

At the end of the hearing, R., who said his life was currently on hold, said he regretted what had happened, as this had not been his intention. He also said he felt “sorry” for the relatives of the deceased.

O., who said he had been very much involved in clean-up operations with youngsters all over St. Maarten after Hurricane Irma, extended his condolences.

“We’re no monsters or cold-hearted murderers like we are being portrayed. I’m a good son and brother. I am sad it went this way. I was not looking for trouble,” he said in his last word.