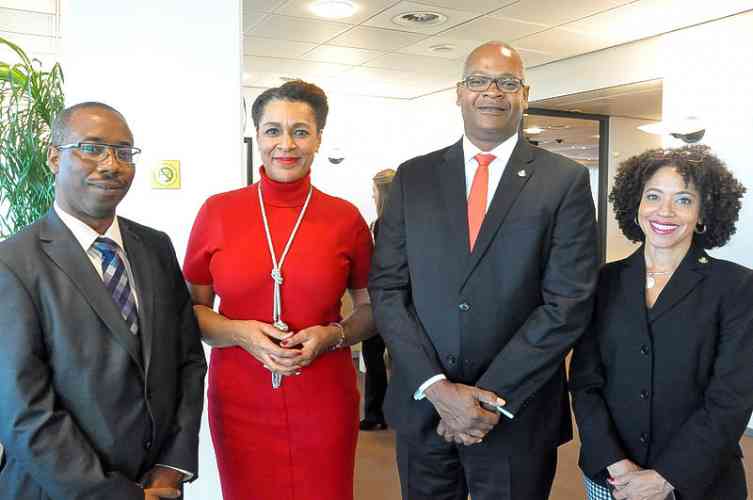 THE HAGUE–The Dutch and St. Maarten government had constructive talks on Friday about the return of the St. Maarten prisoners to the Pointe Blanche penitentiary in the near future.

It was confirmed during the meeting attended by St. Maarten Minister of Justice Cornelius de Weever, St. Maarten Minister Plenipotentiary Jorien Wuite, Dutch Minister of Legal Protection Sander Dekker and Dutch State Secretary of Home Affairs and Kingdom Relations Raymond Knops that both countries recognise the importance of starting the process for the prisoners to return.

Immediately following Hurricane Irma, the Dutch government facilitated the transfer of close to 50 inmates with long prison sentences to Curaçao and the Netherlands. This was done for safety reasons because the Pointe Blanche prison and its exterior walls had suffered extensive structural damage during the hurricane.

The Dutch and St. Maarten government concurred during Friday’s meeting at the Ministry of Justice and Security in The Hague that the coming period will be used to prepare for the transfer back to St. Maarten and to work out further agreements regarding the process. The two main topics of the meeting were law enforcement and the prison system on the island.

“It is important that we all make arrangements for the return of our inmates. We cannot afford to wait until the last minute. We have to be prepared for the transfer,” De Weever told The Daily Herald. A number of preparations are being taken to accommodate the inmates back at the prison.

In a recent interview with this newspaper, State Secretary Knops said that housing the St. Maarten prisoners in the Netherlands has a hefty price tag. He said the Netherlands helped out because there was an emergency situation after the hurricane and there was danger of inmates escaping.

The Dutch government also assisted by making personnel of the Judicial Institutions Service DJI available to help guard the Pointe Blanche prison after the hurricane and to make funds available to fix the exterior wall.

The Dutch Ministry of Justice and Security further made experts available to draft a Plan of Approach for the long term. The prison is outdated and ideally a new prison would have to be constructed. However, funds for such a major undertaking are not readily available in the regular budget of the St. Maarten government.

In a joint statement released after Friday’s meeting, the two governments said that both countries were aware that in the material area as well as in the organisational and security area, measures were necessary at the level of the prison and law enforcement.

The parties agreed that the point of departure was and remained that detention was an internal, autonomous affair of the Country St. Maarten and that the safeguarding of legal security is a Kingdom affair. The countries confirmed their mutual support and it was concluded that the meeting took place in a positive atmosphere.