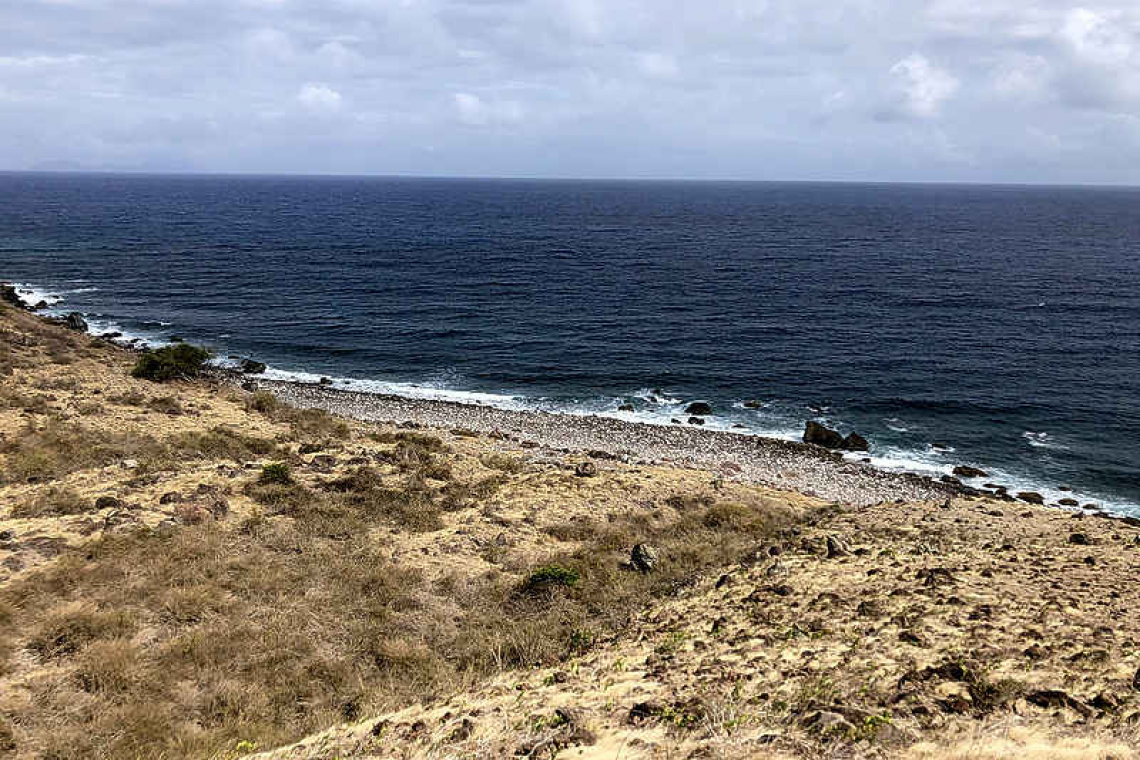 The Black Rocks area where Saba’s new harbour is slated to be built.

SABA–The project to construct a new harbour at Black Rocks is proceeding.

The existing dirt road has been widened and rock catchment benches have been created to provide safe access to the Black Rocks area.

The intention is to start construction of a grouted rock wall along the road soon and to initiate preparatory works for utilities. Various studies have been completed that provide important information for the further elaboration of this comprehensive project, financed by the Dutch government.

The archaeological site survey by Saba Archaeological Foundation SABARC has been concluded. Several artefacts were found in the Black Rocks area, including two old ship cannons that will be moved to a dive site. The soil investigation and the laboratory tests of the soil samples taken from the land and seabed are finished. The fieldwork by a team from Geotron of the Netherlands was concluded in September last year, after which laboratory tests were done on the soil samples.

The outcome of the soil investigation helps to determine what construction methods are feasible for the breakwater. One possible method, a cofferdam breakwater, requires driving of piles. The soil investigation shows that this could be a challenge at the Black Rocks location, because of some large boulders situated in the deeper layers of the seabed. A specialised company has been asked to advise on this aspect.

Through physical model tests at University of Ghent, Belgium, the strength of different construction methods was tested. For this purpose, two scale models, a vertical (caisson/cofferdam) and a berm (rock) breakwater were exposed to different wave conditions, up to those of a category five hurricane.

These test results will serve as input for the general design of the harbour by Witteveen+Bos of the Netherlands and for the marina design by ATM Design Engineering Consulting of the United States. Harbour project manager Ton van der Plas explained that even though the physical model tests showed that the wave forces of a category five hurricane were five times lower at Black Rocks than at Fort Bay, the wave impact is still very heavy.

An environmental impact assessment (EIA) was carried out by Ecovision of Curaçao as part of the permit application. The extensive report is ready in draft format, but still needs to be discussed with the stakeholders.

The assessment addresses the environmental impact of the harbour development on both the landside and marine life. Focal points include the colonies of elkhorn coral (Acropora palmata) in the project area, which is a protected species. These coral colonies will have to be relocated before the harbour construction starts.

Saba Conservation Foundation (SCF) is running a pilot project to determine the best relocation method and location. Fragments of four coral species were moved to two different locations. So far, monitoring of the fragments has shown that the best location to replant the corals is “Hole in the Corner”, east of Black Rocks.

The EIA also points out that the cliffs of St. Johns, close to the harbour development, are a nesting site for the protected red-billed tropicbird (Phaethon aethereus). Measures must be taken to avoid disturbing these birds during the construction of the harbour.

Another important topic in the EIA is the risk of erosion, which has a negative impact on the corals. The proposed new harbour will be constructed in a zone that is already affected by uncontrolled erosion, largely caused by roaming goats. Development of the area will further impact the still-vegetated land. This aspect must be tackled through the goat control project and revegetation of the area.

The EIA concluded that a major project such as a harbour development is bound to have an adverse impact on nature. The objective is to keep this adverse impact on the environment to a minimum and to balance it in the decision-taking process with the economic, social and safety impacts.

Van der Plas presented all these latest developments to the Island Council on May 6. According to Van der Plas, there was a lot of interest and many questions were asked.

For the next few months, the project will focus on the detailed design, the permit application and the tendering procedure. Tendering for new harbour is scheduled to start before the end of this year.