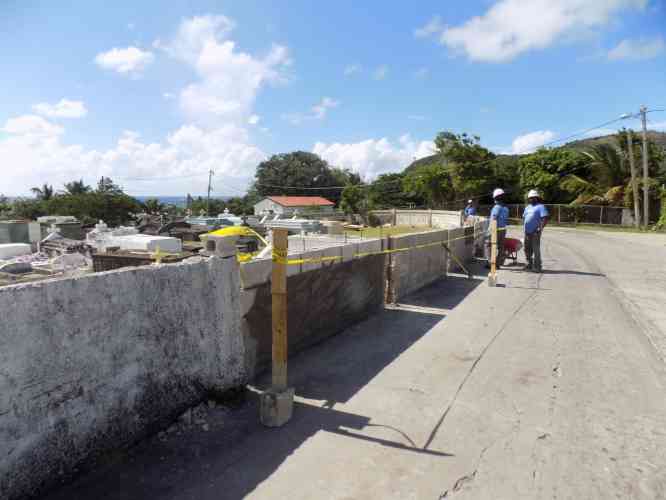 Workers of CTC Construction making repairs and reinforcing the wall around Salem Cemetery.

ST. EUSTATIUS–The public cemeteries in St. Eustatius, which were neglected for many years, are currently under renovation.

The cemeteries that are currently undergoing large-scale improvements include the Salem, Roman Catholic, Anglican, Jewish, Old Church and the Dutch Reformed Church cemeteries, which are spread throughout the island. The activities are being carried out by Statia contractors.

The Cemeteries Improvement Project is already two months in execution and is scheduled to be completed by January 2019.

The scope of work includes building retainer walls to prevent further cliff erosion and the strengthening and beautification of walls, gates, and walk- and driveways. Furthermore, each burial ground will have new signage and a memorial wall.

“Several of these burial grounds are of significant historical value and are promoted as visitor attractions. Therefore, before work was started talks were held with the stakeholder organizations, such as churches, and also with the St. Eustatius Monumental Foundation,” stated Programme Manager for Reconstruction Mel Raboen Sanchez de Pacheco.

“Our technical team is working closely with contractors to ensure that these projects are carried out to specification and in accordance to the building code. When this project is completed an important part of the cultural heritage and Statia tourism product will be enhanced,” said Interim Director Economy and Infrastructure Anthony Reid.

The Cemeteries Improvement Project is funded by the Ministry of Home Affairs and Kingdom Relations, and is supervised by the Directorate of Economy & Infrastructure under the direction of the Recovery Programme St. Eustatius that was responsible for the execution of the Housing Recovery Project following Hurricanes Irma and Maria in September 2017.