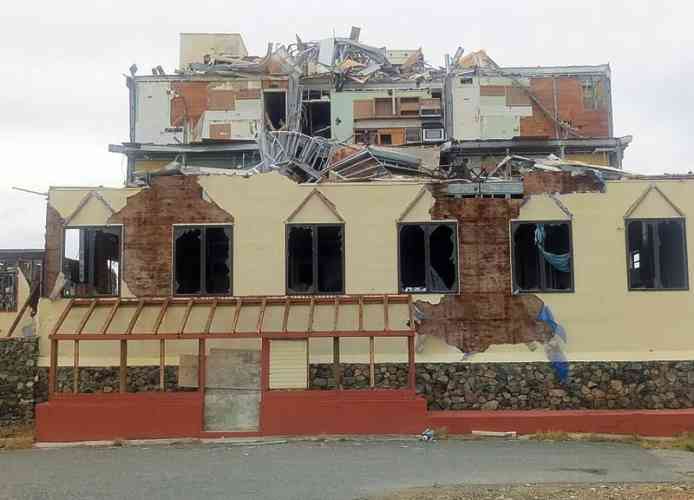 CUPECOY–Timeshare owners at Ocean Club in Cupecoy are worried about loss of their buy-weeks with the demolition of the hurricane-ravaged property by developer Eric Loor.

Loor recently sent an e-mail to timeshare owners saying the resort had experienced the full wrath of the storms and “we have been ordered by the authorities to demolish the remnants.”

However, the Ministry of Infrastructure VROMI has confirmed that it has not issued a demolition order and that Loor has decided on this step alone.
Contacted by The Daily Herald about the demolition, Chris Wever, Chief of Staff of the VROMI Minister’s Cabinet, responded after checking into the matter, “I can safely say that VROMI did NOT order the demolition and that Mr. Loor acted on his own.”
Loor was also contacted by the newspaper about the demolition and his plans for the property. His response was: “For now, I can’t comment on it.”

In his e-mail to timeshare owners, Loor stated that management had spent the past months on crisis management, assessing the factual and legal situation, and exploring solutions for members.

“As ownership of the (real) properties on the premises of the resort is fragmented, we have engaged outside counsel to establish the rights and obligations of the various stakeholders,” he wrote. “At the same time, we are exploring solutions for the future of the resort and/or our members. We are confident to be able to present viable solutions before this summer.”

Loor told timeshare owners they would receive “detailed information on the sustained damages of the resort as well as demolishing cost” in the coming weeks.
“I apologise for not being able to provide more information at the moment. However, these extraordinary circumstances require an in-depth approach, which costs time,” he said in the e-mail.