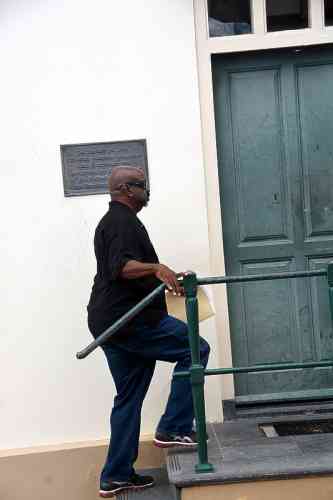 PHILIPSBURG–The Prosecutor’s Office announced on Wednesday a US $5 million dispossession claim against main suspects in the so-called “Pompei” investigation brothel owner Etienne “Tochi” Meyers (66) and manager D.F.F. (56). However, the claim will not be dealt with until after a possible conviction, the Judge decided.

According to the Prosecutor’s Office, the crimes were allegedly committed against 42 women working at the El Capitan and Le Petit Chateau brothels.

The Prosecutor said during a pro-forma hearing on December 6, 2017, that the defendants had enriched themselves “at the women’s expense” for years. The Prosecutor said the women working at the two brothels had been recruited in the Dominican Republic and Colombia and given the wrong impression about their income, deductions and labour conditions.

When Le Petit Chateau and El Capitan were raided on November 1, 2016, 22 women were working at these establishments without residence and work permits, the Prosecutor stated.

He said the prostitutes were locked up in their sleeping quarters outside working hours. During the police raid of November 1, 2016, metal fences had to be forced open to get to the sleeping quarters, where 22 illegal prostitutes were found locked up.
The case is not yet ready for trial. During Wednesday’s proceedings, defence lawyers submitted requests for the hearing of many witnesses.

The defendants deny the allegations. In addressing the Court, Meyers said he had been summoned to appear due to “envy and jealousy.” The former policeman with 17 years on his tab said he had always operated according to the rules.

“Government gave us these rules. Those girls are our friends and clients. Why would they come back, and why did they not go to Immigration, the Police or the doctor to report exploitation? There was no report from St. Maarten against us, only from the Dominican Republic. Even respectable Judge Bob Wit spoke with all the girls and found nothing wrong,” Meyers said in refuting the allegations.

Defence lawyer Eldon “Peppi” Sulvaran submitted a long list of witnesses consisting of former Lt. Governors, Ministers of Justice, heads of police and other judicial officials, to shed their light on the “policy of toleration” where prostitution was concerned.
He also wanted to question the sex workers involved, as they had provided contradictory statements to the police and the investigating judge, Sulvaran claimed.

The Court allowed the defence to provide the names of six sex workers for additional questioning. As it may take some time for the Investigating Judge to hear all these women, as they are currently most likely residing abroad, parties will reconvene on June 27 to discuss the state of affairs at that point in time. No trial date has yet been set.