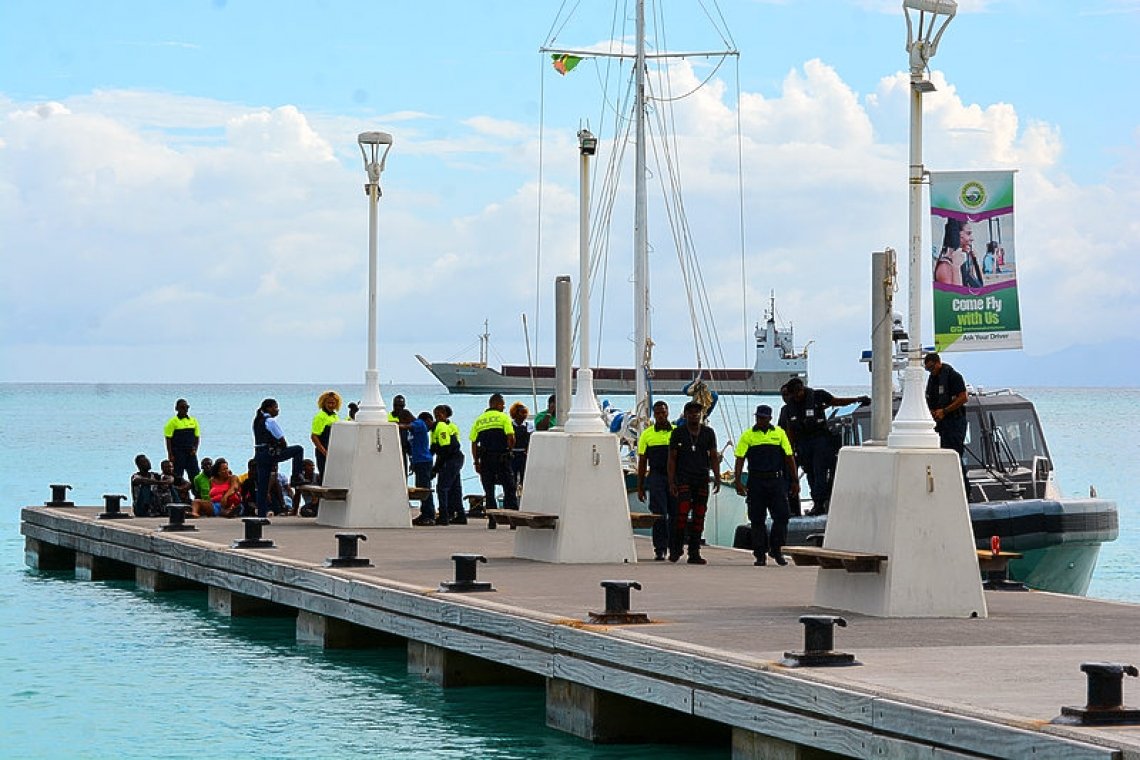 Police and Immigration officers inspecting the sailboat “Solitude” which was moored at the pier near Walter Plantz Square on October 3, 2019. (File photo)

PHILIPSBURG–Three crew members of a sailing vessel from Dominica who were detained by the St. Maarten Police Force KPSM on October 3, 2019, on suspicion of human-trafficking are facing prison sentences ranging from forty to 54 months, it emerged from Wednesday’s criminal sitting in the Court of First Instance.

All three are suspected of having tried to smuggle 14 illegal migrants from Haiti on board the small sailboat Solitude, which was docked at the pier near Walter Plantz Square without first clearing Customs and Immigration, on October 3, 2019.

An officer who inspected the vessel, which had made a journey of approximately 189 nautical miles from Dominica to St. Maarten, said it was not equipped with the basic necessary navigational equipment, lifesaving appliances and documentation to undertake an international voyage with passengers.

“The vessel had clearly shown default in adhering to basic international maritime safety standards,” it was stated in the report.

According to the prosecutor, human-smuggling could be proven, as well as the fact that the illegal operation had put the lives of passengers on board in danger.

All Haitian nationals were illegally in St. Maarten and had paid sums of US $1,000 or more for their shipment from Dominica. Many of them had also paid additional amounts of $20 for diesel and $40 for pick-up with a dinghy and  accommodation.

From telephone data obtained by the Prosecutor’s Office it emerged that C. had been involved with human-smuggling from Dominica for quite some time. M. had played a supporting role in the operation, the prosecutor said. He was given a “free ride” and assisted in sailing the boat. He was also the man who had moored the vessel in St. Maarten.

During a preliminary hearing in their cases, the three suspects claimed their lives were in danger, as they said they had been taken hostage and their relatives asked for ransom while they were held in pre-trial detention in the Pointe Blanche prison.

According to lawyers Geert Hatzmann and Marlon Hart, their clients C. and M, respectively, were threatened with weapons and pushed into a cell without any interference from prison guards, on November 2, 2019.

Hatzmann said his client had been held for hours, during which time one of the defendant’s sisters was also threatened and urged to pay a ransom.

The lawyer said his client’s life had been in danger, which, he said, should lead to his client’s release from detention because the prison does not meet the safety requirements. The incident also led Hatzmann to plead with the Court to declare the prosecutor’s case against his client inadmissible.

The prosecutor confirmed that the defendants had filed a complaint pertaining to deprivation of liberty and extortion within the prison’s confines. She said the case had been investigated by the police. Several detainees were questioned and arrested. According to the prosecutor, no decision has yet been made to prosecute the suspects and present their cases in court.

The Council for the Judiciary stated in a report in April 2017 that there were serious problems with the overall internal security in the prison. “This applies to both the prevention and management of calamities and to the areas of aggression management and drug discouragement,” the Council said.

“The combination of lack of vision and policy, non-working equipment, unprepared [staff – Ed.], a shortage of employed and supervisory personnel, the presence of [home-made] weapons and non-structural use of cell inspections creates a tense and unsustainable situation within the prison and has a direct influence on the safety of everyone inside the prison walls.

“At the moment, the safety of visitors, staff and detainees cannot be guaranteed, which, according to the council, is an untenable and vulnerable situation,” attorney Hatzmann said in his pleadings in citing from the report.

The Council feared for serious incidents and emphasised that this situation could and should no longer continue.

“Politicians and country St. Maarten are not going to solve this; so much is clear,” said Hatzmann. “Mantras such as ‘we are working on it’ and ‘there are plans’ are nothing more than bad excuses.

“Honourable judge, you are like the Roman emperor at the Colosseum: thumbs up or thumbs down. You know where you will be leaving people behind or where you’ll be sending them to, a place where their lives are in danger every day.”

He announced a large-scale injunction to be filed by “almost every” criminal lawyer in St. Maarten on behalf of “dozens of prisoners” in which they will be demanding transfer to a safe penitentiary due to the “constant” danger in the Pointe Blanche prison.

In these summary proceedings, the detainees involved will be calling for a daily penalty of $1,000 per detainee, in case of non-compliance, Hatzmann added.

The judge in the human-smuggling case will present his decisions on Wednesday, February 19.