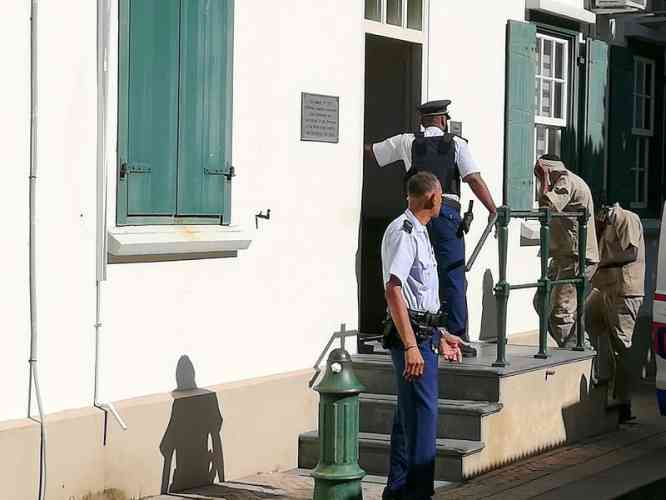 PHILIPSBURG–The Solicitor General on Friday called for prison sentences of fifteen and twelve years for two men suspected of involvement in a large number of armed robberies in 2016.

Orlando Tovian Grey was sentenced to 12 years’ imprisonment on June 8, 2017, as the Court of First Instance had found it legally and convincingly proven that he had committed 11 armed robberies at Chinese supermarkets and restaurants between July 27 and October 18, 2016. The maximum punishment for armed robberies is 20 years.

Co-defendant Kendy Pierre was sentenced in November 2017 to nine years for having committed 11 armed supermarket robberies and for possession of an illegal firearm.

Both defendants denied the charges and said they were being held in detention for something they did not do.

During Friday’s appeal hearing, the Prosecutor’s Office presented surveillance-camera footage of the armed robbery of Old Tree restaurant on July 28, 2016, during which staff and customers were robbed by two armed and masked men.

In November last year, the Joint Court decided to reopen the two cases for additional investigation into the sound fragments belonging to the video footage, to compare these with fragments of wiretapped telephone conversations on which Grey’s voice was heard.

The police officer who, based on this information, had linked Grey with the Old Tree robbery was heard as a witness and questioned by the defence on Friday.

An investigation by a voice-recognition expert of Netherlands Forensic Institute (NFI) could not be carried out, as the NFI said the quality of the recording was too low, the Joint Court stated.

The Prosecutor’s Office had charged both suspects with involvement in 11 armed robberies. But based on similarities in, for instance, the two firearms that were used and the suspects’ clothing and footwear, the Solicitor General said Friday he was convinced that Grey and Pierre were in fact responsible for no fewer than 29 robberies committed in the third quarter of 2016. All these robberies were bundled together in the so-called “Onyx” investigation carried out by the Police Force’s Special Robbery Unit.

During the November 2018 hearing, the Solicitor General had called for confirmation of the two verdicts. In a move that surprised the defence, the Prosecution now demanded 12 years for Pierre instead of nine, due to the “large-scale nature of the crimes committed.”

Grey, who was sentenced by the Court of First Instance to 12 years, would have to sit for 15 years if it were up to the Prosecutor’s Office.

Attorney-at-law Geert Hatzmann accused the Prosecutor’s Office of “flipping sides,” Speaking on behalf of Pierre, the lawyer said not all robberies were committed by the same suspects, as the descriptions provided by the victims and witnesses varied widely. In addition, Hatzmann also pointed out that the accent of Jamaica national Grey varies widely from St. Maarten English.

Grey’s lawyer Shaira Bommel was also surprised that the Prosecutor’s Office used the robberies that were not included in the indictments to obtain a higher punishment. “Why put 11 robberies in the indictment and the others not?” she wondered.

Bommel called on the Joint Court to acquit her client and warned the three-judge panel to use the voice recognition cautiously.