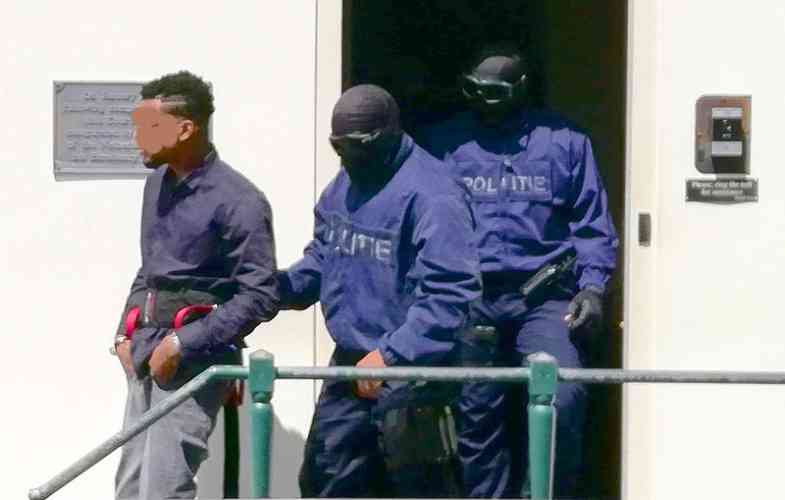 PHILIPSBURG–The Prosecutor’s Office has requested a 24-year prison sentence for suspect H.F.M. (27) and 22 years for his brother H.H.M. (24) for the alleged murder of Franky Brunache at Pica Shell Road in Hope Estate on January 24, 2017. The Court will give its decision in this case December 12.

“Murder is one of the most serious crimes, if not the most serious crime in the penal code. This is a murder that has all the characteristics of a liquidation. Franky Brunache was liquidated 20 metres from his home, 20 minutes before his birthday. This is clearly a brutal and deceitful act of violence,” the Prosecutor’s Office said.

According to the Prosecutor, the two suspects presumably planned and carried out the Brunache murder, together with a third suspect, Kathron “Cuchi” Fortune, who has not been formally charged with this crime yet.

In a wiretapped telephone conversation, Fortune allegedly told the two suspects that the money would be “split in our three. … I don’t have nobody else between, understand, so 25-grand divided. Let me go get the chopper.”

According to the Prosecutor, this conversation was an indication that three persons would have to divide the amount of 25,000 among them.

A “chopper,”  the Prosecutor said, does not only mean a helicopter or a motorcycle, but also an automatic machinegun, according to urbandictionary.com.

In the Prosecutor’s opinion, H.H.M. drove the getaway car, a “silky brown” Hyundai Accent, with H.F.M. and Fortune being the shooters.

The Prosecutor’s Office presented witness statements, information obtained from wiretapped telephones and the results of forensic investigations to prove its case.

The scene of the crime was meticulously searched for forensic evidence. Some 39 shells were found, presumably fired by an AK-47 machine gun and a semi-automatic pistol. Brunache was shot at 20 times and his car was hit by dozens of bullets.

He was killed on the spot in what the Prosecutor described as a “cold-blooded reckoning” in a residential area where bystanders could have easily become victims. The murder was possible drug-related.

According to the Netherlands Forensic Institute (NFI) this investigation may be linked to the “Palmtree” and “Tomato” investigations, in which the same firearm was used.

Palmtree concerns the killing of Tabeha York (31) and his girlfriend Sabrena Martes (23) on January 6, 2017, for which H.F.M. and H.H.M. were arrested and questioned. This investigation is still ongoing.

The Tomato case is about the shooting of Adrian Thewet, also known as “Nino Brown,” who was killed by gunshots at the car wash on Arch Road on March 14, 2017. No one has been arrested in this ongoing investigation yet, the Prosecutor stated.

The Prosecutor presented a wiretapped phone conversation between Brunache’s girlfriend and his sister in which it was stated that Thewet allegedly had told Brunache’s sister that it was “the 25-year-old that killed the man, and Cuchi.”

Thewet also told her that he was very shocked by Brunache’s death and that he was afraid of being murdered as well. According to the Prosecutor, “the 25-year-old” could be nobody else but H.F.M. who was 25 when Brunache was killed.

Other forensic evidence against the M. brothers include gunpowder residue that was found in the getaway car and possible traces of blood and glass particles found in and on a shoe belonging to H.F.M. The glass comes from the broken car windows, the Prosecutor said.

The Prosecutor requested a higher prison sentence for suspect H.F.M., noting that he has been convicted for three different crimes. Also, the murder was committed while he was on probation. For this reason, the Prosecutor also requested the execution of a one-year conditional prison sentence.

The brothers denied their involvement in the gangland-style killing. Their lawyer Marije Vaders primarily built her clients’ defence on the mistake made by police investigator J.V.G.

In using wiretapped telephone conversations as evidence in this case the Prosecutor’s Office had established that H.F.M. would have been in the car that was used in the killing. However, early October it emerged that a police detective had made a mistake in the voice recognition. The voice which was recorded minutes before the murder did not belong to H.F.M., who speaks with a Curaçaolenean accent, but to Fortune, who hails from Grenada.

The detective in question had written 21 reports in the investigation, but these were unquestionably correct, the Prosecutor asserted. According to the Prosecutor, the detective had made an “honest mistake,” but only in one of the reports.

The lawyer disagreed and said the detective had done a sloppy job, which had mistakenly led the Prosecutor to believe that her clients had been involved. Therefore, she pleaded with the Court to declare the Prosecutor’s case against her clients inadmissible, as the defaulting police officer had “contaminated” the entire investigation.

Vaders also said there was no direct evidence linking her clients to the alleged crimes, which include illegal firearm possession, and said the Prosecutor’s case was built on “assumptions.”

Due to the mistake made, the lawyer also pleaded for the continued suspension of H.F.M.’s pretrial detention, as ordered by the Court on October 3, but this time the judge denied the request due to the severity of this case. Therefore, both defendants were taking back to the Pointe Blanche prison after the hearing.