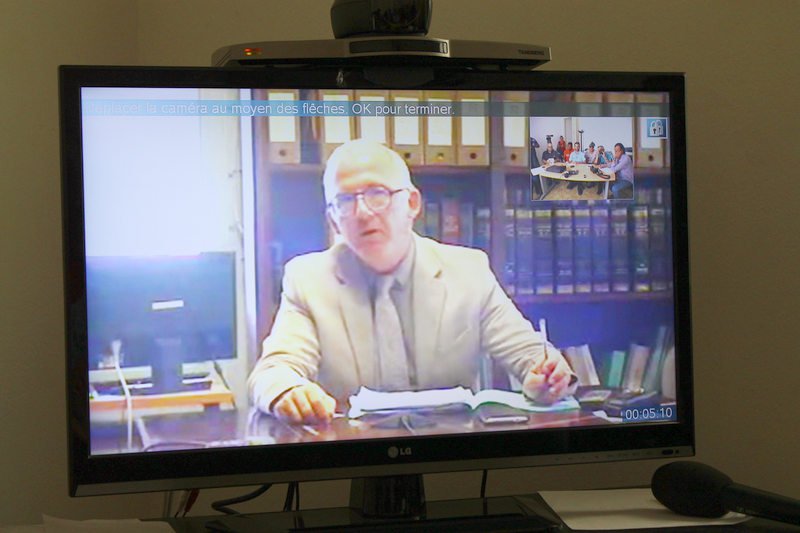 Prosecutor Samuel Finielz talks to journalists via a Skype video link from Guadeloupe on the Wendy Montulet murder case.

MARIGOT—Guadeloupe Prosecutor Samuel Finielz confirmed to journalists on Monday that Wendy Montulet, the young Belgian tourist who went jogging on Saturday July 9 and never returned to her hotel, died of multiple stab wounds, comprising puncture and slash wounds, consistent with that inflicted by a knife.

That was the preliminary finding of cause of death from the doctor on the scene. Finielz, who was speaking to the press by video link from Guadeloupe, was guarded with his information in view of the sensitivity of the case and in respect for the family.

He declined to disclose details of the weapon and how many stab wounds or their location on the body. He said at the moment there were “not enough elements” to say if the victim was sexually assaulted or raped, nor did he reveal if the body was found fully clothed, partially clothed or without clothes.

Finielz indicated Wendy (22) was on holiday on the island for the second time. This time her stay at Le Flamboyant Hotel was for 10 days. She was in the habit of jogging every morning for about an hour, usually in the direction of Lowlands.

“The justice system, Gendarmerie, and other authorities and departments are fully mobilised on this case as a matter of extreme importance,” he said. “The Dutch side police and prosecutor are fully aware of the situation.”

The parents of Wendy are no longer at the hotel but in the care of a victim’s association and receiving counselling from a psychologist and other social services. The Association Trait d’ Union is assisting with all the paperwork that needs to be done before the family can return to Belgium with the body.

An autopsy of the body to confirm cause of death will be carried out this Thursday in St. Martin. In addition DNA evidence from the body was flown to a laboratory in Bordeaux on Monday for analysis as a matter of urgency.

Deputy Commandant of the Gendarmerie Captain Emmanuel Maignan said this evidence will be compared in the data base in the hope of identifying the murderer.

The Gendarmerie was alerted to what was then a missing person case on Saturday at 2:00pm by the father-in-law of Wendy. Immediately some 30 Gendarmes were deployed to search for her in the Baie Nettle and Lowlands area without success.

Capitaine Maignan said the intensive search included studying video surveillance, asking people if they had seen Wendy from the photo, when they had last seen her, and alerting the Dutch side police and the KPSM who carried out some controls at the border.

On Sunday a helicopter was brought in at 8:30am to assist with the search and also a team with a sniffer dog. The dog located the body in the bushes a few metres away from the main road in Baie Nettle and on the Lagoon side, at 2:00pm. The dog searched in vain all morning and required a rest. The search resumed at 1:30pm with the dog finding the body a half hour later.

Some 60 Gendarmes were involved in the search on Sunday. Patrols.

Maignan added a team of 15 detectives and specialists are now working around the clock on the investigation. Gendarmes have also been going from house to house asking if anyone has information.

“This particularly applies to persons living between Sandy Ground and the border at Cupecoy who might have seen Wendy or anything suspicious between the hours of 9:00 am and 11:00am on Saturday.  We also want businesses to look at their video surveillance footage to see if Wendy is on it and bring it to the Gendarmerie. This also applies to citizens who might have cell phone footage”.