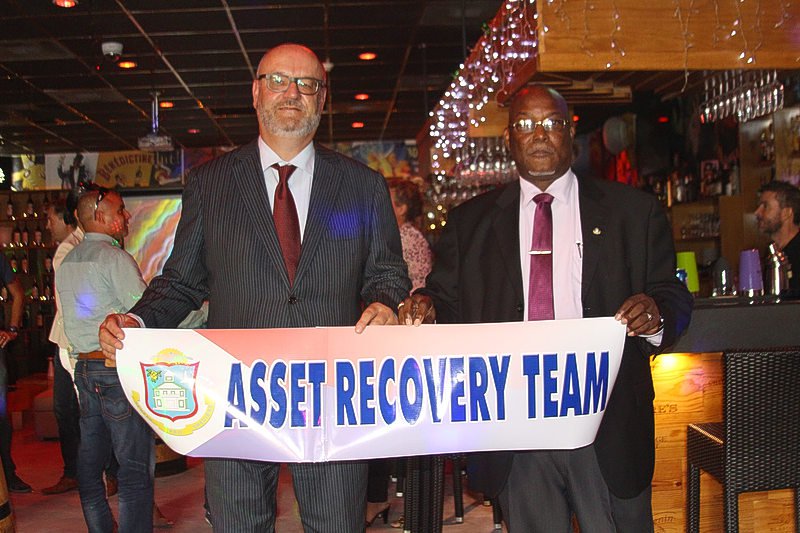 PHILIPSBURG–Government and the Prosecutor’s Office of St. Maarten are collaborating to go after money-launderers and combat illegal activities involving financial gain by these criminals. Prosecutor Ton Maan and Minister of Justice Rafael Boasman announced the start of the Afpakteam (Asset Recovery team) in St. Maarten on Thursday afternoon.

The team comprises Police, Coast Guard, Tax officials, Social Insurer SZV, Customs and Prosecutor’s Office officers. The team’s responsibility is to seize assets such as homes and other buildings, vehicles, boats and anything of value from persons the Prosecutor’s Office deems suspects.

Prosecutor’s Office spokesman Norman Serphos informed members of the press that the penal code will not be applied in seizures. Authorities will use laws outside of the penal code. Suspects will have to show proof of ownership before being allowed to get back what was seized.

The Prosecutor’s Office therefore would not need the court system to make someone a suspect and the court also does not have anything to do with the assets seized, according to Serphos.

Similar teams have been operating in Curaçao for some time now. St. Maarten’s Council of Ministers approved the project four months ago after it was requested by Minister of Finance Richard Gibson Sr.

Boasman said during the launching, “To seize illicitly generated money is an example of such a new approach while tackling organised crime. The Government of country St. Maarten takes the tackling of organised crime very seriously. It is important that citizens feel safe in their country, and understand that crime does not pay.

“The focus of most forms of criminal activities is geared towards generating money. Therefore it is logical to deter the motive to participate in criminal activities by seizing the illicit funds, subsequently, the motive to commit crimes. In general, criminals assess time in prison as a business risk; however, seizing their illicit funds hits them harder. Therefore, I wholeheartedly support the establishment of the Asset Recovery Team.

“Choices have to be made whether or not to investigate a particular case, and by which means to do so. With the cooperation within the Asset Recovery Team, we as a Government can utilise all our administrative, criminal and fiscal capabilities. This is very effective. Only by making maximum use of all the resources that are at our disposal as a Government, we will be able to deal crime a heavy blow.

“However, I would like to warn that cooperation is harder than it seems. This is due to the respective agencies having different goals and ways of doing things. Cooperation is to compromise. The department heads play an important role in ensuring that this cooperation is effective. This makes your contribution very important. You play a role in building bridges between the agencies.”

The team will investigate suspects that have acquired wealth over the years and those persons will have to prove how they acquired their wealth. Serphos also mentioned that over the years, criminals have become wise and they oftentimes use other persons to register the properties.

“They use their mother, sister or friend, but at the end of the day, even these people will have to show how they came to own properties or lavish gifts. Consider this: a person that is not working and not paying their taxes, but have huge assets? These types of situations will be looked at,” said Serphos.

People who are working normally or maybe inherited property will not be investigated. This team will do an extensive background check first before moving in.

“Persons with a clear conscience should not have anything to fear. We live in a democratic state governed by the rule of law, where citizens are protected by rules and legislations. This also applies to this new approach to tackle crime,” explained Serphos.

“Criminals have something to fear in that their illicit funds will be seized, and be distributed to the community. The money can be used to initiate projects to make society a safer and therefore better place. In a nutshell, this is a win-win situation. Our society will become a safer place and funds will be available within the Justice chain.”

Prosecutor Ton Maan said he is happy that St. Maarten took the lead to develop this team. “I can assure the public that the funds derived from these seizures will go towards projects that benefit the community directly,” stated the Prosecutor. The team will start their actions immediately and there is no end date, according to the stakeholders.