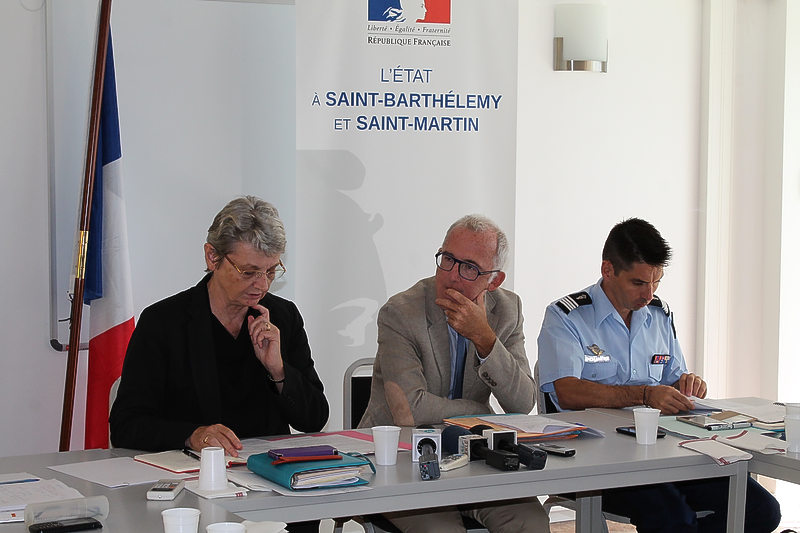 ~ Crime in general down significantly ~

MARIGOT–Guadeloupe Chief Prosecutor Samuel Finielz told a press conference Wednesday, the St. Martin population should be heartened in the knowledge the quality of criminal investigations done in St. Martin, in terms of the resources, forensic means and expertise are of “exactly the same” quality as in France.

He was speaking on the release of the 2016 crime figures for the French side by Préféte Déléguée Anne Laubies, which he referred to as “very encouraging.” He alluded to the high success rate of solving serious crimes, also commented on by Commandant Sébastien Manzoni.

Almost all areas of crime have seen significant reductions compared to 2015 figures, with Finielz noting the “level of delinquency currently is back at a level comparable to 2003.”

All types of burglaries, residential and commercial, dropped by 22.67 per cent las year, and violence in all forms dropped by 20.53 per cent.

In St. Barths, there were 418 delinquency incidents in 2016, a very slight increase on 2015. Commandant Manzoni noted seven extra Gendarmes were assigned to St. Barths to cover the Christmas and New Year activities.

Nine homicides were recorded in 2016 compared to six in 2015, and eight attempted homicides against 17 in 2015. Car thefts of all kinds, including two wheeled vehicles, dropped by 17 per cent.

Finielz said the encouraging figures are attributed to recent reinforcements to the Gendarmerie and the court system; 18 more gendarmes were assigned to St. Martin in 2016 with extra patrols implemented on the territory. Gendarmes were given a base in Baie Nettle (Hotel Mercure) to react more quickly to crime in that area, and more staff and expertise were added to the criminal investigation departments.

The court (Palais de Justice) now has two Vice-Prosecutors and more staff, fines are given speedily and audiences for serious cases “comparution immediate” were implemented twice a week as of January 2017.

There will be further improvements when the court annex (chambre detachée) construction is completed at the end of this year, permitting St. Martin to have a branch of the Court of First Instance in Guadeloupe. Finielz anticipated inauguration of the annex will take place in January 2018.

French law enforcement, however, is very concerned about road delinquency and plans to get tough on offenders with more controls during a “repressive phase” starting Thursday on both islands.

The main offences are driving under the influence of alcohol or drugs, not wearing seat belts or crash helmets, driving without a valid driving licence or insurance etc. Drivers in St. Barths apparently are frequently guilty of these offences it was noted.

Finielz said sanctions would be “firm and severe” and could include having one’s car confiscated.

Commenting on the crime figures in general Préfète Laubies said it was “important not to let our guard down and work to continue the trend in 2017.”

Police aux Frontières (PAF) noted in 2016, 498 procedures were issued for persons residing in the territory illegally, 17 for human trafficking, 16 for working illegally and 38 for false documents.

Commandant Manzoni disclosed the Gendarmerie has acquired a two-way radio from the Dutch-side police as a result of the last meeting between the two law enforcements which will enable immediate and direct communication in the event of cross-border escapes for example. The Gendarmerie hosted a reciprocal meeting Wednesday afternoon for their Dutch-side counterparts.

“Cooperation is on-going between us on a daily basis to share information and it is functioning well,” Manzoni assured.

Prosecutors Michaël Ohayon and Yves Paillard attended the press conference, but were not asked to speak.