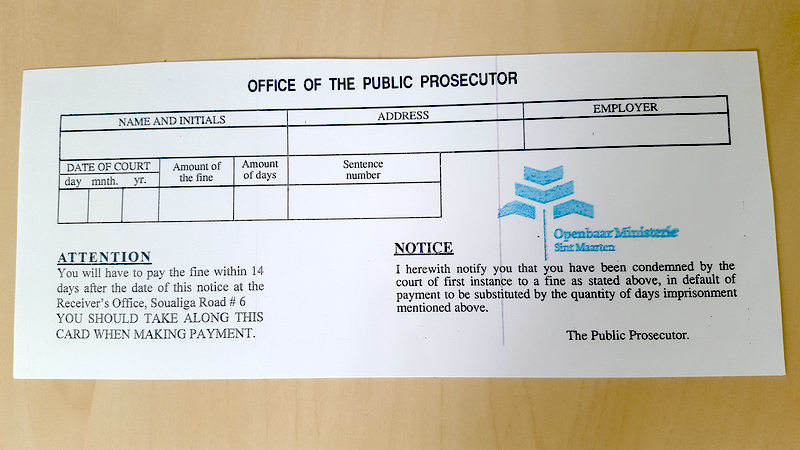 PHILIPSBURG–A total of NAf. 190,316 in fines issued by the St. Maarten Police Force (KPSM) has been collected in the first six months of 2016, according to a statement from the Prosecutor’s Office on Thursday.

More than half of the total amount in fines collected in the first six months of this year is due to the tighter police traffic controls. During these controls, Police summoned those with outstanding fines to render payment immediately.

The Prosecutor’s Office is catching up with the backlog in uncollected fines. Residents with outstanding fines are urged to pay them as soon as possible to avoid additional cost. Non-payment of outstanding fines may result in an alternative sentence in prison. For every NAf. 50 worth in outstanding fines, one day in prison can be levied for non-payment.

Fines can be paid at the Receiver’s Office on Soualiga Road, at the police headquarters on E. Camille Richardson Street (only by debit card) and at the Prosecutor’s Office in the Vineyard Building, Buncamper Road 33 (only debit by card).

Persons with outstanding fines must first visit the Prosecutor’s Office to receive confirmation of the exact amount to be paid.