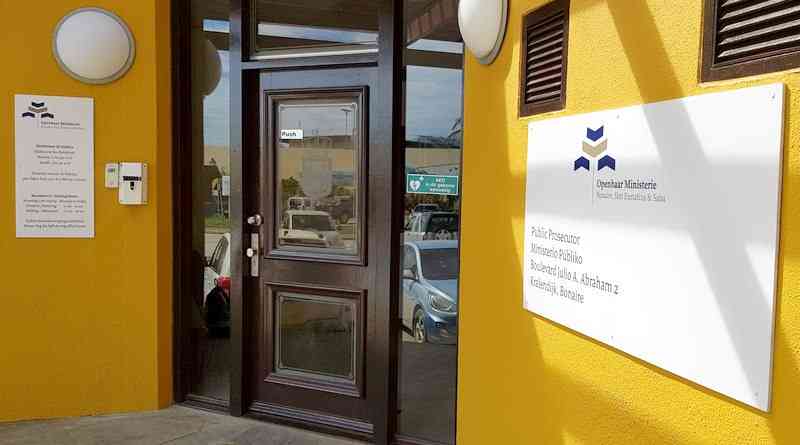 The Prosecutor’s Office headquarters in Bonaire.

SABA/ST. EUSTATIUS–The Prosecutor’s Office of Bonaire, St. Eustatius and Saba works increasingly and intensively with other parties to increase the effect of punitive intervention and to reinforce government action as a whole.

The realisation of the Bonaire Integral Safety Policy is an example of this, as is the collaboration within the Island Platform for Crime Control (“Eilandelijk Platform Criminaliteitsbeheersing”) in Bonaire. In addition, steps are being taken to realise an integral safety policy for St. Eustatius and Saba, the Prosecutor’s Office stated in its 2018 annual report.

The safety network within which the Prosecutor’s Office works comprises not only the police, the Royal Netherlands Marechaussee and Customs, but also the public entities, the various enforcement departments and other relevant public, semi-public and private parties in society. Therefore, the deployment of the Prosecutor’s Office is more and more frequently aimed at other objectives than just criminal law.

Approximately half of the 346 criminal offences resulted in a summons to appear before the Court. The other half were dealt with by the Prosecutor’s Office itself. In 71 of those cases, community service and/or a fine was imposed.

In 126 cases dismissal followed. The percentage of dismissals is high, which the Prosecutor’s Office relates to the quality of the official reports supplied and the number of so-called policy dismissals such as, for instance, a disciplinary punishment or an administrative action.

The considerable decrease in Bonaire can be explained by the imprisonment of a few notorious domestic burglars, the Prosecutor’s Office stated in the report.

To further reduce the number of domestic burglaries, the Island Platform for Crime Control (“Eilandelijk Platform Criminaliteitsbeheersing”) in Bonaire took the initiative to take corrective action with regard to prevention. For this purpose, the Centre for Crime Prevention and Safety (“Centrum Criminaliteitspreventie en Veiligheid”) in the Netherlands will set out to work in Bonaire together with other parties.

“It is true that an increase can be seen in these registered criminal offences, but that increase (Bonaire and St. Eustatius) mainly concerns threats/abuse and domestic violence. With regard to an increase in domestic violence, it can be cautiously concluded that people appear to be more prepared to notify and report crimes. The government campaigns with regard to awareness therefore appear to be becoming effective,” Prosecutors said in the report.

In Bonaire there is an “evident” and “clear” increase in the number of minors who come to the attention of the police and the Prosecutor’s Office. According to the police, this can be explained by the fact that young people relatively often meet up at hang-out spots. The police also indicated that the lack of a meaningful of way of spending their free time and the lack of affordable recreation for young people plays a role in this.

“Drug-related crime in the islands continues to demand unabated attention,” the Prosecutor’s Office said. Whereas in Bonaire this mainly involves the transit of cocaine to the Netherlands, in Statia and Saba it involves in particular so-called drug-related crimes which cause nuisance, such as street trading and drug use.

In the Safety Policy, the Prosecutor’s Office advises keeping a better eye on the air and sea borders. “This does not concern deploying more people and means of transport so much, but especially the technical possibilities. With better radar, better ICT [information and communication technology – Ed.] facilities and the deployment of other digital aids, considerable progress can be made,” it was stated.

This type of crime also includes “white-collar” crime by members of respected professional groups, which “occurs in Bonaire in different forms. Detrimental to the approach to this is the lack of knowledge in the police force in particular. Financial investigation is still in its infancy,” the Prosecutor’s Office said in the report.

The approach to human-trafficking and -smuggling in the Caribbean Netherlands islands lags behind, just as in the Netherlands. The National Rapporteur on Trafficking in Human Beings and Sexual Violence against Children also draws this conclusion with regard to the Netherlands in its last progress report.

That must improve, says the rapporteur. “The victims often do heavy or dirty work which you and I would never do for those amounts. And that is just the tip of the iceberg. We must protect these people.”

In Bonaire it primarily concerns South American women working in prostitution and men working in the building sector. Although several investigations into possible human trafficking were undertaken in Bonaire in 2018, these did not result in any criminal cases involving human-trafficking.

“For a proven statement regarding human-trafficking it must be possible to prove ‘force.’ However, a settlement proposal was made to a few companies in connection with allowing illegal foreigners to work,” the Prosecutor’s Office explained.

The juvenile justice system was introduced in Bonaire, Statia and Saba this year. This has a pedagogical character, where the interests of the child, protection and special prevention are the main priorities. The prevention of recidivism also plays an important role in this, as well as improving the upbringing of young persons.

Under management of the Ministry of Justice and Security, intense work is being carried out on the implementation of the juvenile justice system.

With regard to prevention, there are concerns about the enforcement of the Compulsory Education Act. There are cases known in Bonaire where children have no longer been going to school for some time. The enforcement of this law lies with the public entity Bonaire. “Hopefully, the arrival of the new Executive Council will bring about a change in this,” the Prosecutor’s Office said.

The Island Council of Bonaire adopted a modernized Road Traffic Ordinance on January 30, 2019, that replaced the old regulation of 1958. Communication about the new rules and their implementation is mainly the task of the public entity Bonaire, the Prosecutor’s Office explained.

“The enforcement of these new rules by the police can only follow once the public entity Bonaire has dealt with them. For the most prominent new rules – driving with dark-tinted windows, calling handsfree, wearing seatbelts and helmets, the use of baby-seats and the stricter rules concerning the use of alcohol in traffic – the police and the Prosecutor’s Office are less dependent on the public entity Bonaire,” it was stated.

The Violent Offences Compensation Fund Act (“Wet Schadefonds Geweldsmisdrijven”) for Bonaire, Statia and Saba came into force on April 1, 2019, retroactive from January 1, 2017. The fund can issue a one-off payoff to victims and surviving relatives of violent criminal offences who have or have had serious physical and/or psychological problems or injuries.

In collaboration with the Ministry of Justice and Security, the possibilities are being considered of further expanding the rights of victims in the Caribbean Netherlands, such as the introduction of a so-called advance-payment scheme. This is a scheme that can be invoked by victims if the perpetrator cannot or does not wish to pay the compensation imposed by the Court, which frequently occurs on the islands.