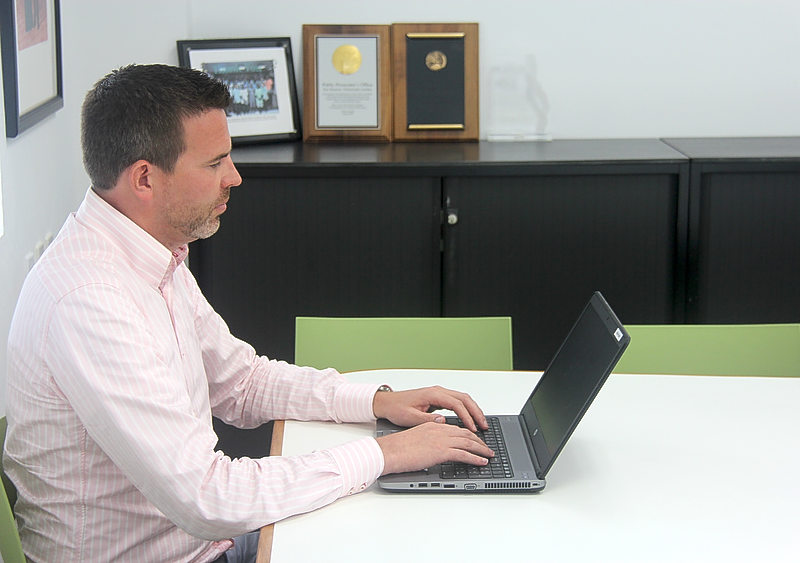 PHILIPSBURG–A number of Government Departments’ information communication technology (ICT) networks were affected by cyber-attacks recently. One attack took place in November 2016, while the other effectively shut down most departments that cater to the public last week Tuesday. The attacks are indication that cybercrime is on the rise and that the Caribbean, including St. Maarten, is becoming more attractive to cybercriminals, said Prosecutor Martin van Nes.

Van Nes, an in-depth specialist in combatting cybercrime in the entire Dutch Caribbean, said cybercrime deserves more attention. “There is insufficient awareness about cybercrime among residents, within the business community, and in Government. There is an increased threat of cyber-attacks and cyber-security should be stepped up,” he said.

He said protection against cybercrime is improving in the United States and in Western Europe. “Also in the Caribbean we see an increased use of personal computers, iPads, smartphones and laptops, but security measures are lagging behind. You are not safe with using a virus scanner alone. Awareness about cyber-attacks is insufficiently developed, and there is no coordinated approach to cybercrime and hardly any public/private cooperation in the areas of prevention and detection,” he said.

Modern-day consumers’, organisations’ and businesses’ dependence on all sorts of electronic data carriers poses a security risk and creates (economic) opportunities for criminals.

“Everyone, all businesses, can become a victim of some form of cybercrime, the motive of which often is financial gain. It is precisely this complex underlying issue that makes this form of crime difficult to detect. The data is volatile, clues disappear quickly and the source is often anonymous.

“Furthermore, cybercrime, which is not limited to borders and time, can cause great damage and many victims in a small timeframe,” Chief Prosecutor Ton Maan said on behalf of Attorney General Guus Schram during the Caribbean Cybercrime Conference in Aruba in November 2016.

The purpose of this Conference, organised by the Attorney General’s Office of Curaçao, St. Maarten, Bonaire, St. Eustatius and Aruba, the Kingdom Detective Cooperation Team RST, and DataExpert B.V. in the Netherlands, was primarily to raise awareness of the increased threat of cybercrime and the growing demand for digital investigations. The aim was also to explain what digital forensics and cybercrime are.

Maan said at the time that because the judicial organisations in the countries currently only possess limited forensic digital expertise it is not strange that there have not been any criminal investigations in relation to this issue. However, this may change soon, as the Ministry of General Affairs has informed the Prosecutor’s Office that it will be filing official reports about the two recent cyber-attacks.

“This could be reason for the Prosecutor’s Office to launch an investigation into where the attack came from, who is responsible for the attacks and how to prevent any attacks in the future,” said Prosecutor van Nes.

He warned that ransomware attacks may cause considerable damage. An attack stops users from using a device and freezes the device, or files on the device, until a “ransom” is paid, usually in bitcoins.

“The recent attack on Government, for instance, took the servers with important client data at the Civil Registry and the Tax Administration down, making certain services temporarily unavailable,” Van Nes explained. “A cyber-attack on utility company GEBE or on petroleum company SOL Antilles N.V. may also have huge consequences.

“Criminals strike where it is easy for them to do so and where the chances of them getting caught are small. Some launch a cyber-attack for fun, but usually they do it for money. Any attack by ransomware looks like an ordinary kidnapping. You only get the servers back after you have paid, when you are lucky.” He underlined that the vulnerability to attacks needs to be reduced by taking extra security measures.

St. Maarten is not the only island under attack by cyber-criminals. The servers of the Parliament of Trinidad and Tobago were attacked in 2012. The Government of Barbados was attacked in 2013 and Jamaica in 2014. In 2015 there were cyber-attacks in St. Vincent and the Bahamas.

“Cybercrime is everywhere. It includes online stalking and the young girl with a telephone who is the victim of cyber-bullying, as well as those dubious emails you receive at work claiming you have won the lottery. In a recent report it was stated that the cost involved with cybercrime in the Netherlands in 2014 amounts to 1.5 per cent of the country’s gross domestic product (GDP),” said Van Nes

He said St. Maarten needs the establishment of a crisis team, which may consist of representatives of Government, the Prosecutor’s Office and the police, as well as Bureau Telecommunication and Post, ICT companies and Internet providers, to coordinate a joint approach in case of a large attack. He recommends the formation of a Computer Emergency Response Team (CERT) or a Computer Security Incident Response Team (CSIRT).

The criminal code does not contain many stipulations where cybercrime is concerned. However, this may not always pose a problem for the prosecution of cybercriminals. “Stealing data is legally the same as theft with the use of a false key, and cyberbullying is punishable similar to slander and threat,” Van Nes explained.

However, the prosecution of cybercriminals may be a challenge, as it often concerns cross-border crime. “Most cyber-attacks originate in Eastern Europe, Russia and Asia. It may be quite a challenge to persuade our counterparts in Ukraine or Russia to prosecute a criminal organisation involved in cybercrime. But it cannot be excluded that local persons are also involved in this type of crime,” Van Nes said. He said more technical expertise is required to prevent attacks on computer systems.

Minister of Finance Richard Gibson described Government’s ICT last week as comprising “hanging wires” and being held together with tape.

It is not known how well GEBE, Princess Juliana International Airport SXM and the local banks, for example, are protected against cyber-attacks. Protection against attacks involves more than buying a virus scanner and issuing a warning not to click on dubious e-mails. Companies should also get involved in providing information and training, according to Van Nes.

“I am aware that St. Maarten already has enough difficulties, but I also call for attention for this new challenge. I would like to engage in discussions with Government and businesses about their concerns,” he said.