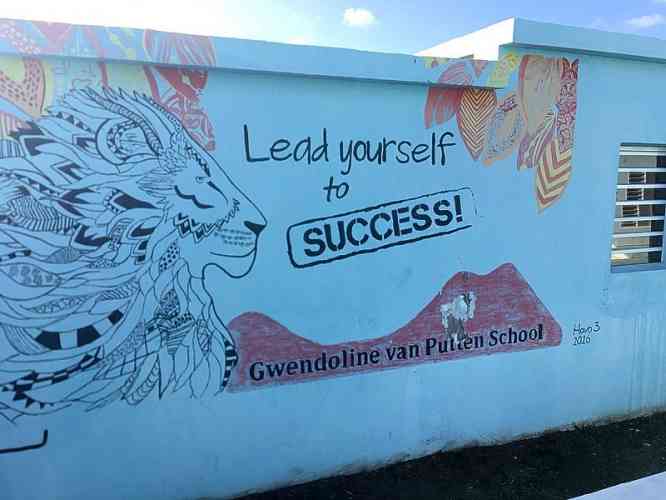 Mural made by Havo-3 students of Gwendoline van Putten School in 2016.

SABA/ST. EUSTATIUS–Prosecutor for Saba, St. Eustatius and Bonaire Henk Jan Starrenburg met on Thursday, February 15, with a group of parents and students who had missed too many hours of school since the start of the year, because of skipping classes.

With intervention of the Prosecutor, community service was imposed on the truants. The punishments were imposed as part of the so-called Halt-trajectory. Halt aims to prevent and combat juvenile crime. Halt’s crime-prevention activities consist of advisory services, educational programmes and the development and implementation of crime-prevention projects. Halt is also responsible for the enforcement of alternative punishment given to young people up to the age of 18.

If the number of hours of classes skipped by a student is no more than 64 the student is eligible for the Halt programme. Receiving a Halt punishment prevents the minor from receiving a police record.

A Youth Case Consultation (Jeugd Casus Overleg, or JCO) is held in Statia every month. Representatives of the Prosecutor’s Office, the police, the Truancy Officer, the Court of Guardianship and Gwendoline van Putten School participate in this meeting.

It has been noticed in the JCO that the number of truants in Statia’s secondary school has increased. It was agreed during the JCO meeting of February 15 that all students who had skipped between 16 and 64 hours of school would receive a Halt penalty. The community-service sentences will be carried out shortly, under the supervision of the Court of Guardianship, the Prosecutor’s Office said.