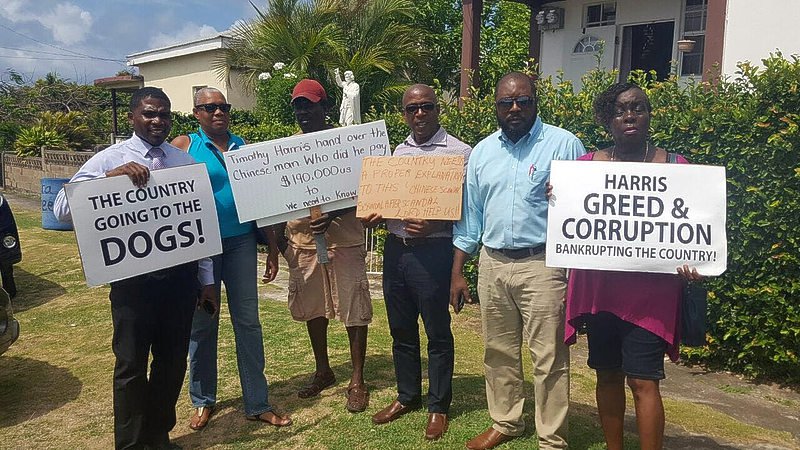 ST. KITTS–Protesters demanded Prime Minister Dr. Timothy Harris deal with the issue of the Chinese fugitive, who China says is getting protection in Basseterre from the local authorities.

Protesters were also standing outside the Office of the Prime Minister on Church Street in Basseterre, demanding that Dr. Harris deal with the request by China to hand over one of its nationals. China accuses Ren Biao, who holds Chinese and St. Kitts and Nevis citizenship, of swindling over US $100 million from a Chinese state-owned firm.

China, which does not have a formal relationship with Basseterre, said it had made a formal request through a third party Caribbean government to St. Kitts and Nevis, but Prime Minister Harris and his government had been uncooperative.

A senior Chinese diplomat told CaribUpdate late Sunday that Beijing would issue a formal statement this week on the matter of Ren, who is on Interpol’s “wanted” list – and

that such statement had already been received in Chinese by all embassies in the region and was being translated into English for release.

The senior diplomat whose Caribbean posting comes to an end this month has also raised the spectre of Beijing moving against a number of agents for the St. Kitts and Nevis Citizenship by Investment programme based in Hong Kong.

Chinese police are said to have spent a week in the Federation of St. Kitts and Nevis with the full knowledge of the country’s top security apparatus as well as Government officials.

Chinese diplomatic sources intercepted communication on April 16, in which Ren called relatives in Beijing seeking an additional US $190,000 to help him continue paying for what he reportedly described as his protection by Kittitian authorities.

It is still not known who has been the recipient of such monies.