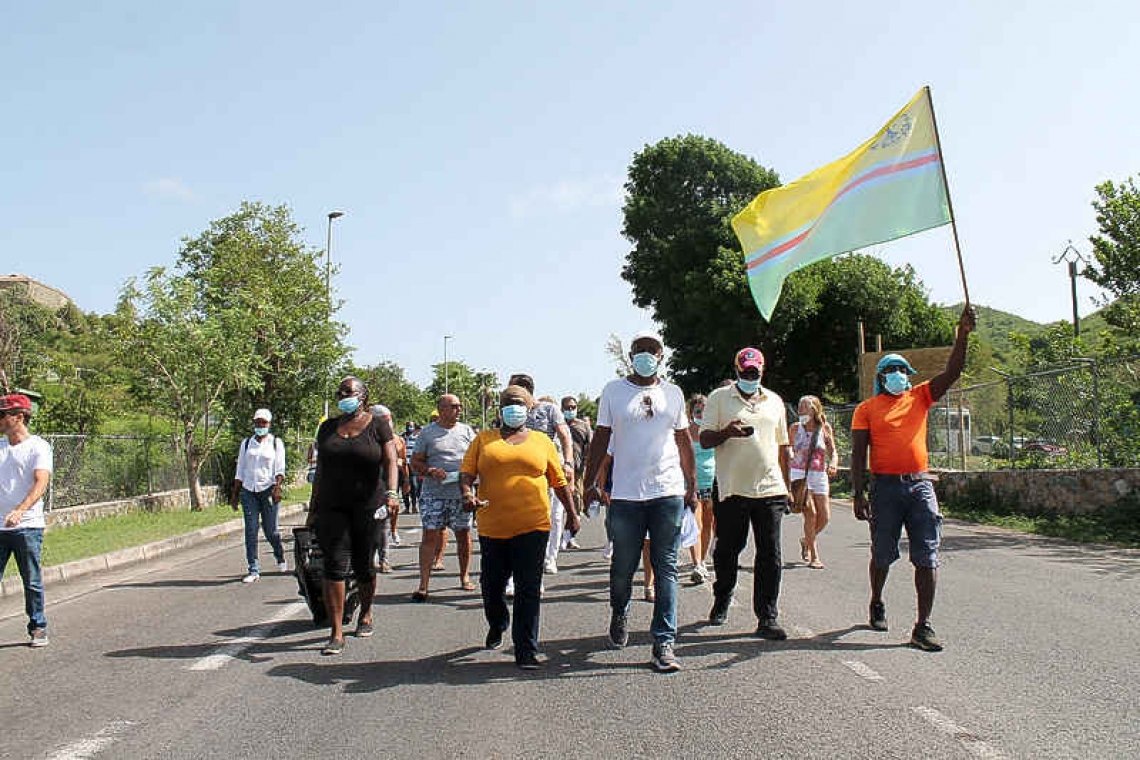 Protestors march towards the Gendarme check-point on the RN7 between Bellevue and Cole Bay on Saturday morning where speakers expressed their objections to the border closures and access restrictions. (Robert Luckock photo)

MARIGOT—Protestors demonstration Saturday morning in Bellevue demanded Prefete Deleguee Sylvie Feucher reopen the border immediately and return to discussions with the Dutch side government for a collaborative approach to managing the crisis.

They called for a reinforcement of health measures on the entire territory to curb the upsurge in coronavirus cases.

The turnout was below expectations, some 60 persons from both sides of the island, indicative perhaps of a population weary of protesting against successive injustices on the French side. But as organiser Lenny Mussington often points out at these demonstrations “it’s not quantity that matters, it’s quality.”

The main grievance in the organiser’s preamble was against the Préféte “taking the unilateral decision to close our symbolic border, in defiance of the Treaty of Concordia which has guaranteed for 372 years the free movement of people on our territory.

“This autocratic method of managing the crisis has proven to be disastrous to our country and well- being of its people. The Préfète has deliberately ignored the fact both sides share a common destiny. Consequently, the economic situation has worsened. The false pretext that she has been using, claiming it is to protect the population is totally unfounded,” the statement read.

Neither Feucher nor President of the Collectivité Daniel Gibbs were present at the protest to offer any solutions. Following the rendezvous opposite Home N Tools the protestors marched under the Unity Flag towards the Gendarme checkpoint about midway to the Cole Bay border where a number of people spoke.

Louis Mussington said he wanted authorities to understand that allowing people to cross the border with an authorisation but no testing for the virus is pointless and inefficient. This time around the Préfecture received 1,000 requests for authorization.

“It is proven scientifically that wearing a mask, washing hands and social distancing are the only weapons we have to fight this disease until a vaccine is found,” he said. “We must stop the parties, close the nightclubs and close the bars earlier. Let’s re-focus on these preventive measures but don’t kill the economy. We have a crippled economy already. We are saying let the people circulate freely but at the same time reinforce the health measures.”

Lenny Mussington wanted the Préfète to know the protest is about the unity of the island and the Treaty of Concordia. “It’s in the DNA of the St. Martin people to live as one,” he said.

Commented Rhoda Arrindell: “Either you believe in unity or you don’t. If you believe in unity you have an obligation to stand up to all forms of division of our island. We must fight to preserve unity at all costs.” She called the narrative about the virus being an excuse for the border closure as “nonsense.”

There was powerful testimony from business owner and district three representative Isabelle Artsen who described a 30-minute confrontation with Gendarmes over documents a week ago. She was attempting to return the French side where she lives after visiting the Dutch side. Despite showing ID and proof of residency she was still denied because she did not have an authorisation. She was finally allowed to pass after going…in her own words, “crazy.”

“How is a person supposed to feel when they are told they cannot go home to where they were born and live? This is affecting all of us mentally. It has to be done in a different way without harassment and provocation but with respect. I have been under stress since Irma fighting to survive. It’s not the virus that is going to kill us, it’s the stress.”

Alain Richardson considered the border closure illegal and unconstitutional. “Do you believe the controls here and in French Quarter are going to stop the virus? Of course not. It has to be a concerted effort by both governments to prevent the spread. Many businesses are in trouble. I know one in French Quarter that is going to close because it depends on 90 percent Dutch-side clientele. My own daughter’s small business is already losing 50 per cent of her customers from Dutch Quarter.”