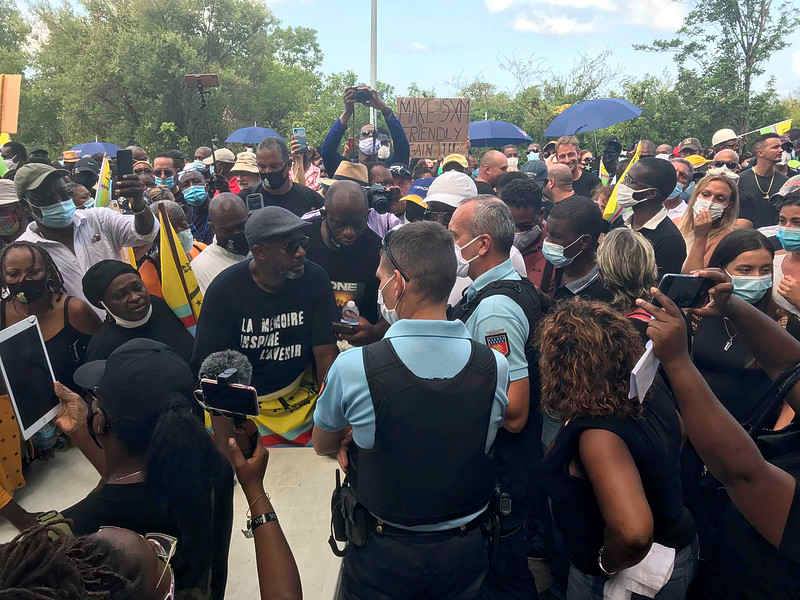 Soualiga United organisers confer with Commandant Stéphan Basso at the check-point around mid-morning over whether the Préfète will agree to removing the border controls. (photo Robert Luckock)

MARIGOT—Protestors are currently waiting for a meeting to start at 2:30pm in the Préfecture with a delegation from Soualiga United and Préfète Déléguée Sylvie Feucher to know the crucial decision on whether the border controls will be removed permanently, or not. Removal of the containers at Cupecoy and Oyster Pond has also been demanded.

The French Overseas Ministry has reportedly left the decision with the Préfète to make, with the ministry supporting whatever she decides.

The meeting was supposed to happen at 11:00am but apparently the Prefete was not ready to receive the delegation. The crowd at the check-point has diminished significantly since the morning due to the heat and limited areas for shade, but many are still there waiting for news, fortified by deliveries of Kentucky Fried Chicken, Domino’s Pizza and bottled water.

About half a dozen Gendarmes are on duty at the check point but the atmosphere is calm and control of vehicles is not taking place currently since an earlier reaction from the crowd when Gendarmes attempted to control a vehicle. Gendarmes have generally shown restraint and Commandant Stéphan Basso has been monitoring the situation.

Earlier in the morning the check-point tent and control barriers were taken down and moved to the side, most likely due to the very large crowd congregating around the check-point area. The planned motorcade did not materialise but was more than compensated for by a massive turnout of protestors on foot who simultaneously marched towards the check point from the Bellevue and Cole Bay directions, most dressed in black and carrying Unity Flags.

The state’s police services estimated the turnout to be around 700 persons from both sides, although it looked a lot more than that. Many elected officials from both island governments joined in the marches.