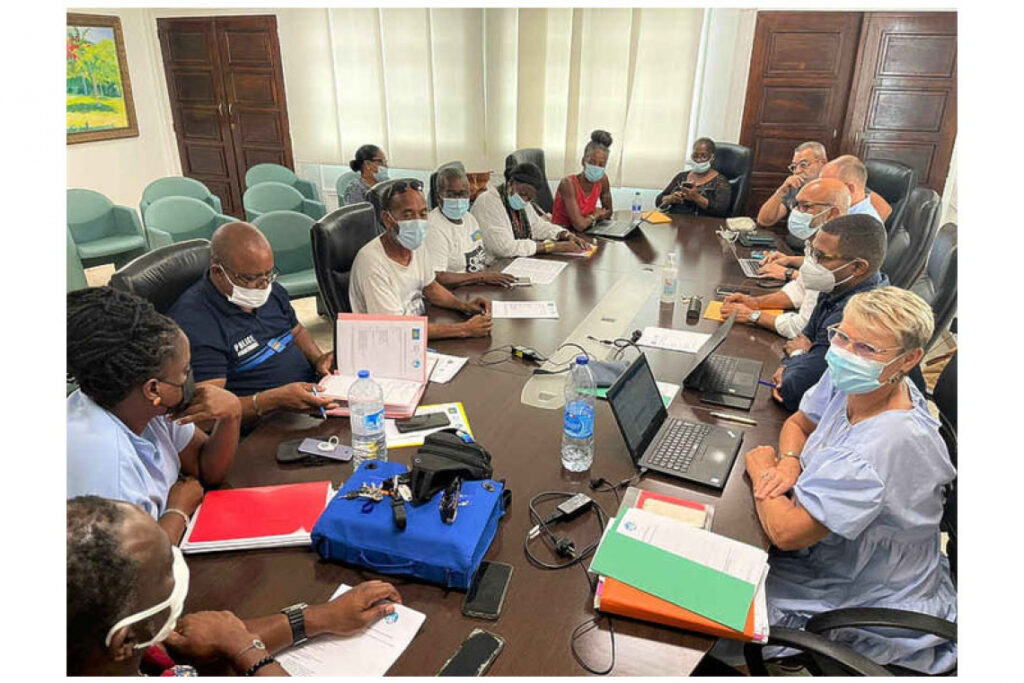 Meeting on Friday between union representatives (left) and President Daniel Gibbs and deputy general directors (right) which led to the signing of a conflict suspension agreement. The Collectivité strike lasted for 13 weeks.

MARIGOT– After a close to three-month strike by union UNI.T-978, a conflict suspension protocol was signed this Friday, October 8, between President of the Collectivité Daniel Gibbs, UNI.T-978 and Union Nationale des Syndicats Autonomes (UNSA), the latter having joined the movement during August.

This protocol paves the way for implementation of solid actions in favour of Collectivité employees, health at work and social relations within the institution, and suspends a strike that has hindered the proper functioning of public services for the past thirteen weeks.

Eager since the beginning of the strike to guarantee employees a return to a peaceful working environment, the President had proposed to strikers, on Monday, October 4, a resumption of dialogue to reach a favourable outcome. This proposal was accepted by union UNI.T-978.

The meeting was held on Thursday morning, October 7, in Hôtel de la Collectivité in the presence of Gibbs, the deputy general directors of the Collectivité and respective delegations from UNI.T978 and UNSA. The exchange confirmed the signing a Memorandum of Understanding (MOU) to end the conflict the day after the meeting.

At the end of a session that lasted more than two hours on Friday a protocol of suspension of the conflict was signed; the unions nevertheless indicating they had not obtained a certain number of guarantees that will be the subject of working sessions in the coming weeks.

The situation of the Director General of Services (DGS), Christiane Ayache, was the main sticking point preventing the union from moving on to address the remaining 29 demands. Since July 2, strikers demanded her immediate removal. However, as the high-ranking civil servant had not done anything wrong, she could never be dismissed legally.  It was understood Ayache is on an extended sick leave in France and remains on the Collectivité payroll. Her absence now requires the Deputy General Directors to fulfil her function on an alternating basis.

With regard to the demands concerning well-being and health in the workplace, the Management Committee of the Collectivité has proposed several concrete actions on these priority issues, in continuity with work already undertaken in recent months and always with a view to ending the crisis. The creation of a charter for social relations was proposed to the unions, to promote conditions for a more co-constructed relationship, and to give priority to the service of employees of the Collectivité.

At the same time, themed working groups, open to all union representatives, will meet at the suggestion of the Management Committee, to work collectively on five major areas:

– health at work (psychological support for staff in need, medical committee for the return to work);

– tele-commuting and on-call duty;  the elaboration of a single document for the evaluation of professional risks;

– creation of a Charter of Social Relations to improve relations between administrative management, union representatives and employees. This Charter is intended to be long-lasting. The results of the work of these working groups will be presented to the staff representative bodies.

Gibbs said exit from the crisis was “urgent “as there is still too much to do on the territory.

“The errors, blunders and misunderstandings, on all sides, must serve as an experience so that such a scenario is never repeated,” he admitted.  “While we are going through an unprecedented health, economic and social crisis, our territory is still going through a full upheaval since Hurricane Irma.

“Only the values of fraternity, sharing, dialogue and mutual respect must animate us: All our energies must, therefore, converge towards construction of a St. Martin society in solidarity, fraternity, unity, proud of its diversity, in the image of our territorial institution. We need, beyond our differences, the commitment of all in order to best defend, in the months and years to come, the interests of the people of St. Martin.”