Home The Daily Herald Providence Bay (at Causeway): not the site for a sewerage plant 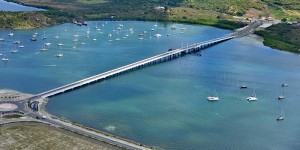 Providence Bay, (informally named years ago, the word means ‘to use foresight’) lies at the Eastern (sunrise) end of the Causeway bridge. It used to be a single bay of mangroves, but is now partly divided by the ‘foot’ of the bridge. Although much of the bay was badly affected during and after the unscreened bridge-dredging operations, it has slowly but surely crawled, swam and wriggled back on the road to recovery both above and below the surface.

The invasive ‘snot-weed’ which took over after dredging is fighting a slow, but we hope losing battle (though summer may bring another bloom). The sudden restriction in circulation in the bay (due to the bridge footing) seemed to contribute negatively, but life abounds! Both sides of the bridge are in recovery mode and every week we see new evidence of mangroves re-establishing themselves on the mud flat, more water birds and frogs, as well as birds of prey are slowly spending more time in the area. Sadly, the bats stay away from the bridge lights.

Alongside the transplanted mangroves, which concerned private individuals took so much effort to establish, crabs and hosts of juvenile fish and fry find their niche for a while. Canoe eco-tours and local recreational fishermen are daily visitors to the environs, we see folks fly fishing, locals catching a few crabs or fish for supper. Evening strollers with their children and the regular runners and cyclists will have seen how this area of Providence Bay is recovering. Both sides of the bridge here make wonderful and practical corner for gentle eco-tourism and resident relaxation. The egrets and herons on the flats to the South are beautiful at sunset.

The historic slave wall is close by to the North, though a scrabble to get through the bush in places. By canoe one can locate where the slave wall encounters the lagoon. Some lobster fishermen removed a lot of the rocks, but it is a pretty spot under the mangroves by the water. I cannot help wondering how many freedom seekers once waited praying in a similar hush, somewhere close to where I am, perhaps? Waiting a chance get to the wall and over; or for the sound of the dogs coming in the night. A simple trail from the bridge would allow folks good access to a contemplative spot by the wall.

Bird watching is gentle and easily accommodated for with a trail and a viewing hide or two, especially to the South. How many people have seen a raptor take a fish at sunset? The island was voted in the top 10 for bird watching destinations recently (see Herald). Passing turtles (a few each year) seem to hang out for a day or so, munching on the weeds and the varieties of jellyfish which colonise some parts. Big shoals of fish of all ages circulate in and through the bay. Rays and barracuda (one really big chap) patrol the bay.

The Southern side of this bay is one of the proposed site for a 6,000m2 sewerage plant built on a man-made peninsular or island, which will require massive dredging and its associated impact. To consider changing the circulation of the lagoon, and destroying a large area of mangrove as well as taking away from the community of St. Maarten yet another pleasant corner, surely must be seen short-sighted. The Nature Foundation of St. Maarten clearly states in its in-depth report on the proposal that they can find NO scientific environmental reason for locating the plant in this area. Read between the lines…

Other locations are available and more desirable, and certainly more ‘dead’ than Providence Bay.

Cole Bay – a diseased, over-developed and poisoned part of the lagoon is in desperate need of help and really the place to start. Cole Bay has been overloaded with heavy traffic, unscreened dredging and re-dredging for years, the tiny flow to the sea is long blocked. The Nature Foundation survey yields scary results. Compare the graphs on pages 15/16 with those on 17/18. A sewerage plant there would allow for rapid clean-up and prevention of more effluent etc. entering that part of the lagoon. If proximity to residences seems to be an issue, then build it long and narrow perhaps? The western end of the Causeway, both sides – barren and open.

The man-made land adjacent to the Isle de Sol marina is plenty big enough, out of sight and already there. No dredging, start building next week! It would serve for all the mega yachts at the marina to pump-out directly instead of trucking sewerage along the roads, or pumping their holding tanks out between island stops. Surely the community-minded owner of this land would be approachable about coming to an arrangement with Government about sharing a small potion his created land with the community for such a vital project.

Each of these suggested sites allows fairly close access to the ocean for emergency discharges of effluent or freshwater excess via a pipe-line, should that be part of the long-term plan.

The eastern end of the bridge does not need such drastic interference, some sensible community input and care, that’s all. It is also an ideal area for a possible play park, youth- sailing training, birdwatching trails, canoeing, re-energising. The politicians have apparently declared the area “dead.” I suppose it might look like that from the back of a passing car with tinted windows. Mangroves are meant to be muddy and messy.

Please and with respect, elected leaders take a better look, read the Nature Foundation recommendations, and remember who will be held accountable for your actions. No, not you of course, I am talking about the taxpayers and their children who will pay for poorly informed decisions made now, for decades to come.

With respect, I am asking all concerned people and groups to publicly voice as many questions as possible regarding the site of the sewerage plant. Wherever it is put, it will have an impact; we must use every consideration to reduce that impact to a minimum. No part of the lagoon or the island is entirely isolate from the rest. Ministers and Members of Parliament, private people, community leaders, church groups, enviro/eco groups, SMMTA, EPIC, schools, University of St. Martin, water tour operators, yacht clubs, etc.; Read or re-read the “Assessment (of) Proposed Location – Sewerage Plant” Nature Foundation of St. Maarten, available fromwww.naturefoundationsxm.org . It has colour photos and graphs and is for the most part clearly explained for the lay person. Take a walk or a paddle around the areas mentioned here. Talk to local environment and nature experts; get as much of the whole picture as you can.

Like the garbage dump situation, action must be taken regarding sewerage treatment, but it is how that action is taken, and with what foresight final decisions are made. Historically and globally, human “management” of environmentally sensitive areas, no matter how well-meant at the time, all too often doesn’t work or rare help in the long term, and sometimes we really mess up! But at least as 21st century, environmentally-aware islanders, using knowledge and foresight we can try very hard to make the most appropriate choices. Let’s do that now! The decision, possibly being made this week, should not quietly go ahead without YOUR input and questions. Sewerage is something we ALL produce.