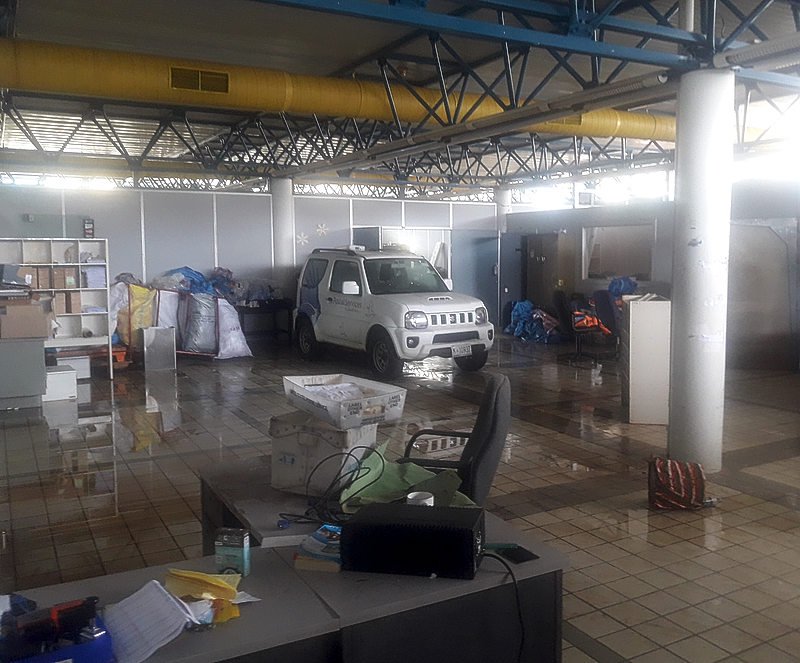 PHILIPSBURG–Postal Services St. Maarten (PSS) has reopened its doors at a temporary rented location in the Vlaun Commercial Building next to The Family Bookstore, opposite the Post Office building.

Despite the significant damage to its building from Hurricane Irma and the additional damage caused by looters who stole customers’ packages and gasoline from the company vehicles that had been parked inside the building for safety, PSS has been doing its utmost over the past weeks to resume services as soon as possible.
PSS had a soft opening on Wednesday, when it served customers who showed up, and will have its official opening to the public today, Thursday, from 7:30am to 2:00pm daily until further notice.
As the temporary location is much smaller than PSS’ hurricane-ravaged building, only five customers will be allowed in the building at a time. As customers are served and leave, others will be allowed inside. PSS has set up a tent with chairs outside its temporary location for the comfort of customers, who may have to wait in queue outside until their turn comes to enter the building.
PSS will be offering all of its regular services on a smaller scale at its temporary location. This includes MoneyGram, postal services and Aeropost online shopping. Some staffers are operating from a makeshift office located in a container in PSS’ parking lot.
PSS Interim Managing Director Antonia Wilson and Supervisory Board of Directors thanked PSS’ management and staff, the Dutch Marines, Bureau Telecommunications and Post (BTP) St. Maarten and everyone else whose combined effort made it possible for the facility to reopen at its temporary location.
PSS has resumed the delivery of mail. Wilson urges residents who may have relocated to visit PSS to inform it of this and collect their mail. Residents should walk with ID to collect their mail. She said there are many items that cannot be delivered because persons lost their roofs and have relocated from their pre-Irma address.
The PSS building sustained significant damage during the passage of Hurricane Irma on Wednesday, September 6. Wilson and PSS Supervisory Board member Hubert Pantophlet said practically everything in the building was damaged during the hurricane. What was not damaged was stolen by looters.
Some staffers who went to work around 7:30am the day after Hurricane Maria encountered a man in the building who was dressed in a stolen PSS uniform and was looting. The man surprised the PSS staffers, who called police, who responded and arrested the man when he admitted to stealing the uniform to loot. Apparently the uniform was stolen inside the PSS building.
Looters also ripped open numerous customers’ packages and stole the items inside. Many of the packages were either labelled to be sent abroad or had arrived on the island for customers. The exact number of packages looted could not be ascertained as of Wednesday. PSS has to check its system to determine how many packages were in the building at the time.
Regarding the vehicles, PSS had parked six company vehicles inside the building for safety during the hurricane, but even these were not safe from looters. Several vehicles were damaged and the gasoline stolen. PSS is deeply disappointed by the looting.
As it relates to Irma, several parts of the roof and the building itself were ripped apart during the hurricane. Inside the building was chaotic. Staffers spent many hours cleaning the building and trying to salvage whatever they could from the rubble.
Asked whether there are plans to rebuild the PSS building, Pantophlet said an assessment is currently being conducted on the building to determine whether this is feasible.
PSS has retained all of its 26 staffers, who are working on a shift system due to the smaller size of the new temporary location.
PSS was experiencing financial issues prior to Hurricane Irma and the damage to the facility from the storm has only compounded its financial crisis.