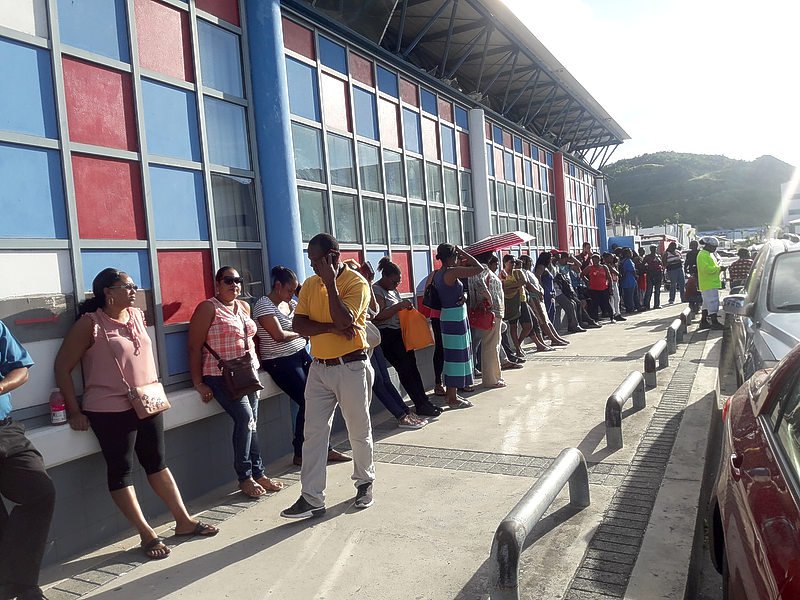 PHILIPSBURG–The industrial action of Postal Services St. Maarten (PSS) workers went into its second day on Tuesday as the workers remained firm that they will not return to their posts until they receive their November salaries.

In an effort to still serve the community, one worker, a manager, decided on her own accord to work throughout the day on Monday and Tuesday to tend to the large crowd of clients that had built up at the facility over the two days. The manager worked until 6:00pm on Monday and continued to work on Tuesday.
The crowd began to build on Monday and grew considerably on Tuesday. From early, a crowd of persons had already built up outside the PSS building. Most of the persons wanted to use the Money Gram transfer service. One client told The Daily Herald that he left his home at 3:30am to be among the first persons in line, only to find that persons were already ahead of him when he arrived. When the office opened, persons who were turned away on Monday who still had numbers were the first to be served along with senior citizens. Many persons in the crowd were upset that they had to wait, but many understood the action of the workers.
During an emergency meeting on Monday, Caretaker Prime Minister Rafael Boasman gave this assurance that the workers will be paid.
PSS workers began their action on Monday when they stopped work and walked to the Government Administration Building with their union representatives and management to protest the non-payment of their November pay and to seek government’s intervention for the payment of their salaries.
The union representatives, management and the board subsequently had a “very fruitful” meeting with Boasman. This newspaper understands that the funds to pay the workers and to cover the company’s overhead expenses are expected to be transferred to PSS accounts this week.
PSS Interim Director Antonia Wilson had said it costs NAf. 140,000 to run PSS monthly; of this amount NAf. 90,000 covers workers salary alone. PSS has 24 workers.