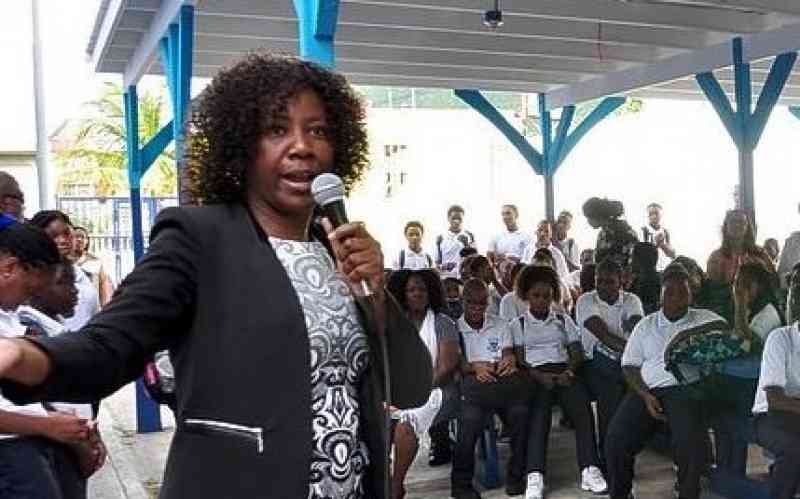 SOUTH REWARD–Teachers at St. Maarten Academy Preparatory Secondary Vocational Education Section (PSVE) are calling for the removal of Principal Lavern Amanda Nelson for creating a hostile and tense working environment at the school.

In a descriptive letter outlining their grievances to the Foundation for Academic and Vocational Education (FAVE) Board on May 26, teachers requested intervention by the board, which manages both Academy schools.

The Daily Herald obtained a copy of the letter, which gave the school board until June 8 to react, but no reaction was received from the board.

Teachers have already contacted the Windward Island Teachers Union (WITU), which stands with the teachers. The letter stated that the situation in PSVE since 2016-2017 had become so tense that the board had been called in to mediate between management and staff. Board chairman Roland Duncan recommended that the teachers put all of this in writing.

“We ended last school year (2016-2017) by submitting to Nelson for the board a review of our first year with her. This document was signed by all staff members. This review highlighted serious concerns that members of staff had with her communication skills, vindictiveness, lack of empathy and procedures that did not have the students’ or teachers’ best interest at heart.

“We started this school year with Mrs. Nelson reading a lengthy reflective speech about her first year in her capacity as Principal at PSVE. She acknowledged that she made many mistakes and promised to change her approach to the management of the school. She acknowledged teachers whom she didn’t acknowledge during the year as having the right perspective. She asked us to give her another chance, as she like everyone else is not perfect.

“Nelson asked for another chance and for a few months she tried to exercise her version of patience, sought advice and utilised suggestions that were made by members of staff. Then the era of ‘peace and love’ began. Peace and love was used to shut up members of staff, diminish situations presented and was used as a holy form of expletive.
“During our School Development Plan workshop in April 2018, where an invited guest was present, this expression of ‘Peace and Love’ was also used by Mrs. Nelson. At that time an invited guest pointed out how negatively it came across and it seemed not to be genuine,” stated the lengthy letter to the board.

“We were told that the school is going to start with a new programme, but teachers were given inadequate information and were directed by the Public Relations personnel to research information via the Internet. Parents received information before the teachers. We were assured that no one should worry about their job security, because everyone would be absorbed into the new system.

“On May16, the staff received an email that informed us of a structural change that involved the appointment of two coordinators, who will be taking responsibility for the lower and upper school. The tasks of the Job Training Coordinator/Counsellor have been absorbed by the function of the Coordinator.

“On May 17, 2018, we learnt that our Job Coordinator’s position has become redundant under the new programme, even though the PSVE programme will be continued for the coming three years, where Job Training is a requirement for completion of the PSVE programme. A staff member who is the current Job Coordinator was informed that her position has become redundant effective school year 2018-2019.”
The teachers also called Nelson incompetent in their correspondence with the board.
“Nelson kept a teacher on staff for five weeks, during the investigation of his alleged improper conduct, knowing that students could be at risk.

“Proper scheduling was not done during the ETE Practical and Theoretical exam (April 9 to May 25, 2018), thus numerous classes were without instruction during that period. Before the ETE Theoretical exams a meeting was held and teachers brought forward the fact that the students would be missing many classes, yet the invigilators exam timetable remained the same. As a result, the students have not received classes for the majority of term 3, but are expected to do the School Based Exams, which will start on June 15, 2018.

“Based on Hurricane Irma, the ministry granted some adjustments in regard to the ETE exams. The starting time was 30 minutes later, to give students time to eat (start time was at 8:00am instead of 7:30am). In addition to that the students received an additional 30 minutes at the end of the exam time. However, this vital information was only communicated the day before and the day of the first ETE exam to the invigilators and on the first day of the ETE exams to the students,” according to the teachers.
The staff also believes that some Guyanese teachers are “the problem in the school,” which was admitted by her in a staff meeting. The same statement was repeated to the Human Resource Manager in the presence of students and staff members on May 22, 2018, on the school compound when she could not locate a Guyanese teacher.

“Positions are created and terminated at her whim. Reshuffled teachers in order to make other positions redundant. Existing year coordinators were not informed that they were relieved of their duties for the school year 2017-2018.”

Teachers said in the letter that they are de-motivated. “As we bring this school year to a close, we sincerely request that you hear our concerns, investigate objectively what we have been experiencing and place Nelson in another position and appoint a principal with more educational leadership and interpersonal skills. We have lost confidence in her.

“Nelson uses scare tactics rather than tested effective leadership skills that will motivate this vibrant and dynamic staff with hundreds of combined years of teaching experience. This is a very hardworking group of teachers, who are capable of taking PSVE into the future with positive leadership and guidance.

“We are recommending that FAVE board facilitates an evaluation of Mrs. Nelson by every staff member. In addition to our recommendation we would like a response on the evaluation process on or before Friday, June 8, 2018,”stated the letter to the school board.
Board chairman Duncan was contacted over the weekend and said, “The board will deal with complaints on Monday (June 10) coming. Deadlines not accepted. Board runs school, not teachers.”