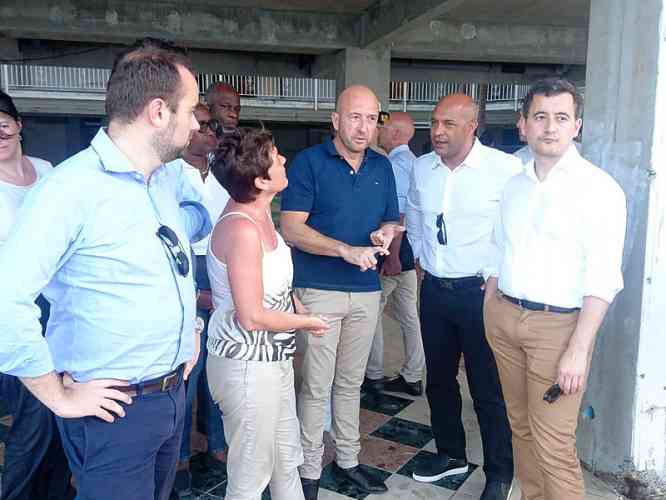 MARIGOT–Reconstruction of public infrastructure (Préfecture, schools, etc.) will be launched on March 12 during the next inter-ministerial committee meeting, which will also decide on the multi-annual investment plans of the State and the Collectivité of St. Martin, it was disclosed during a Ministerial visit on Monday.

The definitive Plan Prevention des Risques Naturelle (PPRN) showing risk zones based on the extent of flooding and measurements taken in the aftermath of Hurricane Irma will also be officially released at the beginning of 2019, not in 2020 as previously thought.

These developments coincide with a report released by the Ministry detailing the current situation in St. Martin and St. Barths six months after Irma and the actions taken by the State during that time. The State deployed a major emergency plan and implemented various measures to support individuals, businesses and the local government.
The protocol signed November 21, 2017, between the State and St. Martin laid the foundations for a sustainable and resilient reconstruction of the island and as early as November the State drew up a new map of the risk zones subject to flooding.
A temporary urban planning regulation was adopted by the Collectivité in January and a comprehensive urban planning policy launched. A definitive urban plan will be adopted by the Collectivité in the coming months.

Arriving on Sunday, the visiting dignitaries accompanied by a pool of national press were taken on a tour of the French side to see the actual situation on the ground six months after the hurricanes. That was followed Monday morning by closed-door meetings with elected officials and representatives of the business community, and a separate meeting with President Daniel Gibbs.

The delegation visited Grand Case to observe the laying of electrical networks underground, followed by lunch at Cité Scolaire and interaction with students. In the afternoon there was a visit to the new Maison de Services au Public (MSP) in Sandy Ground. One will also be installed in French Quarter.

The MSP is designed to bring information to the population. It will offer services such as employment issues (pole emploi), social security, Caisse d’allocation familale (CAF), and Trait d’Union (support for victims). Agents of the Collectivité will also work there, as well as some volunteer staff (services civique) who will receive some payment.
A visit was also made to Le Beach Hotel, one of the most heavily damaged by the hurricanes, where the delegation talked to owner Patrice Seguin.

Also accomplished during the morning was the signing of a convention between the Collectivité and French Customs whereby Customs will be collecting the stayover tax (taxe de séjour) and the gasoline tax.
The delegation was accompanied on the visits by President Gibbs, Senator Guillaume Arnell and Députée for St. Martin and St. Barths Claire Guion-Firmin.