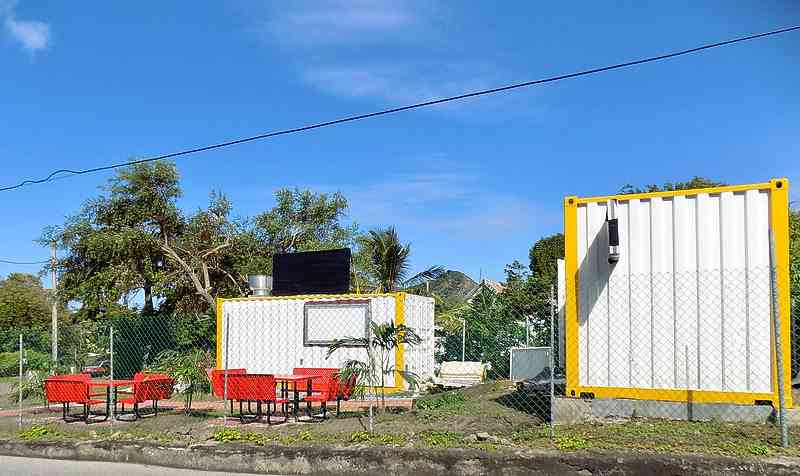 The contested container eatery at Fort Oranjestraat in Oranjestad.

EUSTATIUS–Concerned citizens in St. Eustatius have been posing questions about containers which are being used as permanent “constructions” at Fort Oranjestraat, right in the historical part of Oranjestad.

“Is this allowed? How can you be permitted to do this in the Historical Core?” the concerned citizens wanted to know in reference to an eatery that appeared to be preparing to open their doors at the contested location.

“Yes, worried Statians also came to my office or contacted me otherwise to ask how this is possible and if it is permitted. I would like to say first how encouraging it is that they feel it does not belong and that they make the effort to check on it with me. It is indeed not in accordance with the rules and regulations of the Spatial Development Plan (SDP) that was adopted by the Island Council,” said Monuments Director Walter Hellebrand in response.

The SDP, that was adopted by the Island Council and legally regulates how Statia’s physical environment is used, clearly states for the Urban Conservation Area (“Beschermd Stadsgezicht”) – “Sustainable materials that serve the purpose and fit in the colour scheme and streetscape must be used for the renovation of non-monuments and for new-built buildings.”

Hellebrand said he had first tried to reach out to members of the ousted Island Government and then to the Government Commissioner.

It explains that the zone offers the opportunity to build houses that fit the type and scale of the residential areas. “Containers clearly do not fit the type…The exterior colours of buildings within the Urban Conservation Area are also regulated. Strong, ‘hard’ colours for example, do not ‘fit in the colour scheme and streetscape,’ as stated in the SDP. These take away from the appeal of the historical buildings with their authentic colours. It, therefore, kind of beats the purpose of restoration in the first place,” said Hellebrand.

Deputy Government Commissioner Mervyn Stegers addressed the issue during a meet-and-greet on Thursday. “It was a mistake, we spoke with the owner and agreed that he will beautify the establishment together with the Historical Foundation so that it [the building – Ed] does not look like a container but more like one of the houses that should be there.”

Stegers said he also spoke with Hellebrand, who also is the secretary of the Historical Foundation. “We recognize it was a mistake, they [the owners] should not have been granted a permit to build that [the containers] there.” Stegers said.