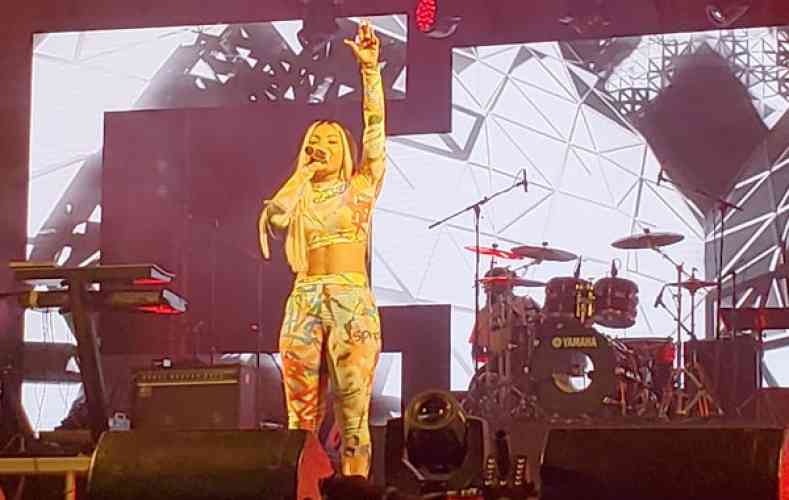 Jamaican Dancehall artiste Shenseea during her performance at Unity Festival.

A large crowd showed up at Festival Village early in anticipation and many were still in line shortly after 9:00pm when the rain came down.

The crowd flocked closer to the stage when Shenseea started her performance around 11:00pm. She sang her hit songs “Trending Gyal” and “Loodi”, and jumped off the stage to touch the hands of eager fans when she performed her song, “Tie Me Up”. She also performed songs from other well-known Jamaican artistes, such as Bob Marley, Popcaan and Aidonia.

Shenseea was followed on stage by reggae band Common Kings, who are based out of California, United States (US). According to the band’s official website, their “style and music is a collection of inspirations orchestrated into an array of head-rocking beats, feel-good vibes and emotional fever.”

Common Kings performed their original songs “Alcoholic” and “Today’s A New Day” as well as “Take Her” off their 2017 Grammy Award-nominated debut album, “Lost in Paradise”. Many in the crowd said they put on an amazing performance.

St. Maarten’s DJ Outkast took the crowd into Buju Banton’s performance. Right before he came on stage, the skies, which had been holding since the earlier bouts of rainfall, opened again. Some of the crowd scattered for shelter, but others took out umbrellas while some even stood unprotected in the open and let the rain wet them.

Buju greeted the crowd with “Our Father in Zion,” as the rain continued to come down and, by then, some persons in the crowd had taken off soaked shirts and headwear. The rain fell for the first 15 minutes of his set, yet the crowd rushed to the front to take in the performance of this recently freed reggae icon.

Buju Banton, born Mark Anthony Myrie on July 15, 1973, in Jamaica, is widely considered as one of the most significant and influential reggae and dancehall artistes. He began his career in 1987 but rose to prominence in 1992 with the release of albums “Stamina Daddy” and “Mr. Mention”. By the mid-1990s, his music became increasingly influenced by his Rastafari faith, as is evident by the lyrics and composition of his seminal albums “Til Shiloh” and “Inna Heights”.

In 2009, Banton was arrested in Miami, Florida, by agents of the US Drug Enforcement Agency (DEA) on suspicion of attempting to possess and distribute more than five kilogrammes (kg) of cocaine.

This arrest was deemed controversial by his fan base because he was implicated by an informant who was reportedly paid US $50,000 for his work on the case. After a mistrial, Buju was found guilty of conspiracy to possess and distribute cocaine and was sentenced to 10 years in prison.

In 2011, Buju’s album “Before the Dawn” won a Grammy Award for Best Reggae Album.

Buju was released in December 2018 and has since embarked on a welcome-back tour called, “Long Walk to Freedom”, which has garnered considerable fan hype.

Buju performed several of his hit songs at Unity Festival, such as “Hills and Valleys”, “Wanna be Loved”, “Close One Yesterday”, “Love Sponge”, “Til I’m Laid to Rest” and “Driver A”. Many of these songs were sung word-for-word by persons in the crowd.

The crowd was rocked by the performance, as evidenced by a man who somehow evaded security, crept onto the stage, put his arm around Buju and rocked side-to-side with the Jamaican artist. Security seemed stunned for a moment but then quickly escorted him off-stage. Buju did not seem upset by the event and motioned to security that he was fine.

His performance ended with a duet of his song “Psalms 23”, sung by him and one of his back-up vocalists. He put his arm around her and gently rested his forehead on the side of hers. At the end of the song, Buju introduced her as his “baby sister”.

Unity Festival ended at 3:00am, at the conclusion of Buju’s performance.