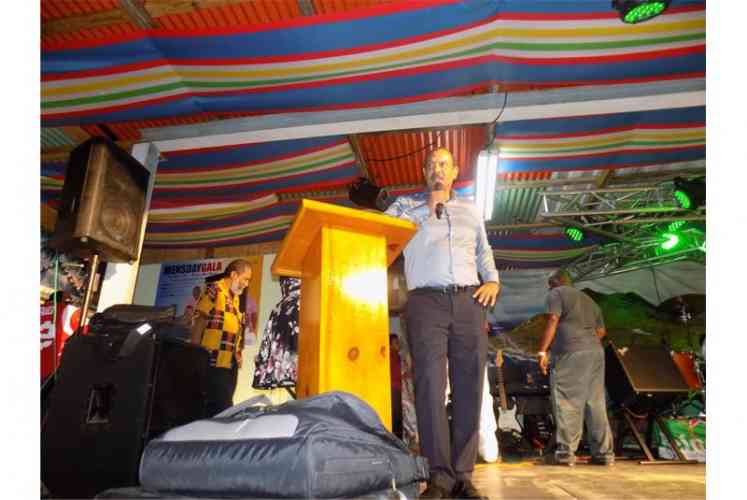 ST. EUSTATIUS–The Statia Day week of activities opened with Gospel Night on Friday. Rainfall did not deter a large crowd from turning out for the event which marked the start of Statia Day Week, which runs November 9, through Friday, November 16.

Sjahairah “Lady Shorteh” Fleming was the Master of Ceremonies for the night, during which Government Commissioner Marcolino “Mike” Franco expressed his excitement to be present for the first time during Statia Day Week.

“This is a week where we do go into reflection to see where we are, where we came from and where we are heading to, a weekend where we do express ourselves in a lot of cultural expressions and festivities,” Franco said before officially opening the Week.

Headliner and award-winning international gospel artiste and evangelist Maxine Duncan performed to the delight of the crowd. She performed various songs from her latest CD “I am Committed to Jesus,” for which she has written 11 original songs. Her performance was “uplifting” and “inspiring,” members in the crowd said.

Courtar took to the stage three times singing and preaching. At one point, he asked the crowd to join hands in a show of togetherness. Courtar said it is his desire to become a Methodist preacher.

November 24, 2020
0
Claudius BuncamperPHILIPSBURG--The Prosecutor’s Office has requested permission from the Joint Court of Justice for the prosecution of current Member of Parliament (MP) Claudius “Toontje” Buncamper. The request was heard by the court during a closed-door session last week.  Prosecutor’s...
Read more

November 24, 2020
0
Claudius BuncamperPHILIPSBURG--The Prosecutor’s Office has requested permission from the Joint Court of Justice for the prosecution of current Member of Parliament (MP) Claudius “Toontje”...