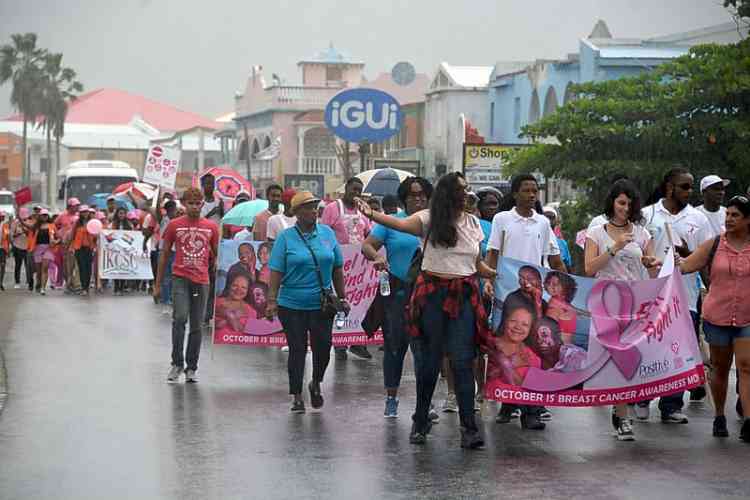 PHILIPSBURG–A heavy downpour on Friday failed to dampen people’s spirits and deter them from participating in full force in the Pink Parade that marked the start of Breast Cancer Awareness Month.

A large group of mostly women dressed in pink turned out and participated in the walk during the heavy shower. Some had umbrellas, but most of the participants walked in the rain to show that the fight against breast cancer is still strong as ever.

Friday’s parade was the ninth annual Pink Parade held in recognition of persons who have lost their battle with breast cancer, those who have survived it and those who are still engaged in the struggle.

The parade was also designed to raise awareness and encourage persons to get checked, as early detection is the best prevention and may save lives.

The parade began at the parking lot of University of St. Martin (USM) and participants proceeded along Walter Nisbeth Road to Front Street and back to the parking lot.

They put everything on hold last year due the passing and subsequent devastation of Hurricanes Irma and Maria. Despite the challenges, Alphonso and Van der Waals-Wyatt “are determined and committed to continue their breast aware campaign to feel it, find it, fight it, during the month of October 2018.”

Breast cancer awareness activities for this month include a Paint It Pink do it yourself workshop, a celebrity waiter dinner, gala movie night, Pink Phit and Phabulousa run/walk challenge, Bikers for Boobs rally, Pandora’s Pink Party, public service announcements on the radio, public and private group information sessions, the distribution of educational literature such as shower guides and women’s breast health handbook and 30 opportunities where women can get a free clinical breast examination offered by resident health care providers.