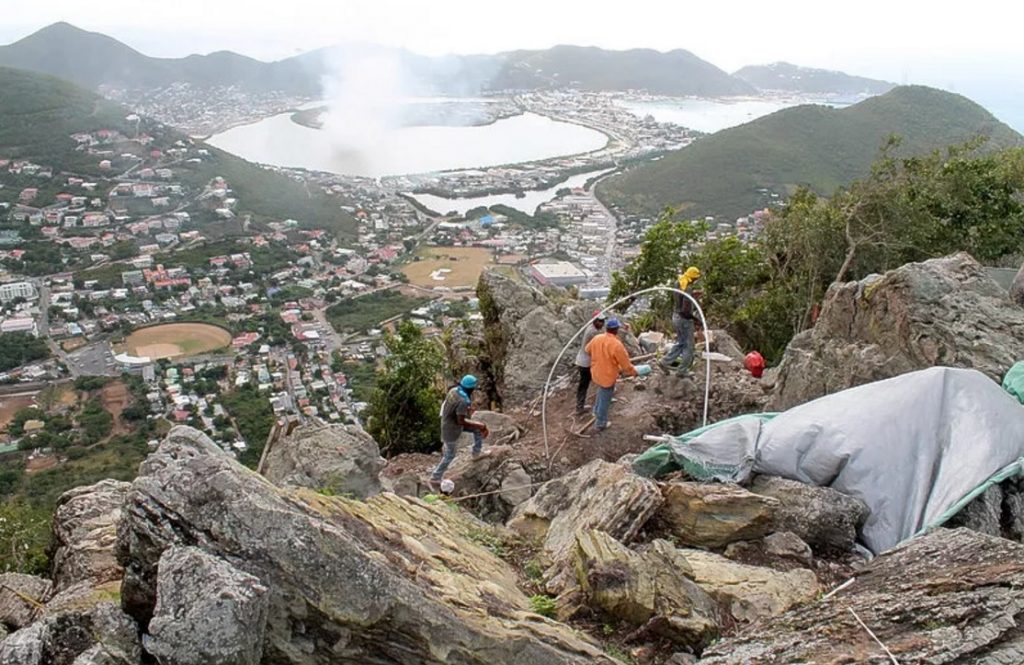 PHILIPSBURG–It’s an early Saturday morning and a couple of reporters are sitting in an Argo trundling up the steep mountainside above Emilio Wilson Estate, something that would have seemed inconceivable years ago.

It’s with some trepidation that this invitation to tour the Rain Forest Adventure project starts by gazing up at our destination: the summit of Sentry Hill. At the controls of the eight-wheel-drive Argo is the project’s General Manager, Scott Swietanski, who skilfully negotiates the steep ascent; the vehicle’s wheels nimbly gripping the rocks and dirt.

The company bought three of these Argos to transport workers up the mountain, the best vehicles for tackling the steep gradient.

Excavators took about three weeks to cut a track in a more or less direct line up to the summit which was less invasive than excavating longer zig-zag tracks.

“I come up here two or three times a day. I must have done it a thousand times already,” Swietanski says nonchalantly.

Without this access there is no way of constructing the ski lift and zip-line attractions Rain Forest Adventures is offering.

Our ride ends at a partly constructed transfer station just below the summit of Sentry Hill. From here another lift will take tourists to the summit for the start of the Flying Dutchman zip-line. For us it’s another 20-minute hike, some of it on man-made steps, passing alarming drop-offs, to access the summit and that familiar aircraft beacon.

It goes without saying the 360 degree views are amazing, except on this morning the Philipsburg view was spoilt by a dump fire. It takes a bit of getting used to that people are actually working at this altitude to create the zip-line infrastructure, wooden observation decks and cat walks.

Installing the infrastructure for the ski lift seems a daunting task and Swietanski, a veteran of ski lift projects, admits he finds this one a challenge, not least because of the extremely hard rock that had to be excavated. The lift system will be supported by 15 towers, the foundations for which are under construction.

Over 50,000 pounds of steel rebar has been carried from the top transfer station to the summit by some 20 workers for the foundations and on November 3 a heavy-duty helicopter arrives to deliver concrete on the mountain, about 156 cubic yards of concrete which will then need three days to cure.

Then it will take another eight days of flying ski lift parts, the giant Bull-wheels, steel and lumber up the mountain. All the ski lift parts and bollards for the zip-lines have arrived.

The helicopter is departing from Atlanta, Georgia, on November 1 and does a few island hops before reaching St. Maarten.

“Our goal is to get all the materials up there and then focus on getting the ski lift running so we can use the ski lift to transport men and equipment up to the job site,” Swietanski explains.

Each chair on the ski lift carries four passengers and 1,000 people per hour can be transported.

The Flying Dutchman zip-line is 780 metres in length, a drop of 300 metres, and will be the steepest in the world with a 41.5 per cent slope. Initially it will start as four zip-lines in one but has the capacity to be increased to eight if demand warrants it.

For the less brave, family-friendly, low elevation zip-lines will also be available.

The zip-line systems have been outsourced to the company Zip Rider which will be installing the equipment in January 2017.

And at a mid-way point, fun seekers can get off the ski lift and do the tubing attraction. Artificial grass, misted with water, will be used for the slide. A Humming Bird garden is also planned.

After five years of negotiating with Government, overcoming resistance from environmental groups and individuals, completing the necessary studies and obtaining permits, the project is in a good place right now.

“Construction began in May this year but after a couple of months of slow progress we are now going full throttle,” Swietanski states enthusiastically. “We’re definitely on track for a mid-June/July opening. We’ve worked hard at showing politicians and sceptics the project and now everyone is loving it. I don’t think we have many detractors anymore.”

Whether zip-lining, tubing or just using the chair lift, everyone arrives back at ground level. The Emilio Wilson park will contain various buildings; an entrance building to buy tickets and obtain information, a museum, restaurant and bar, restrooms, gift shop, photo shop, administration building, visitor parking for cars and buses, and so forth. The whole area will be landscaped using the natural trees and other features.

Swietanski emphasised much effort is going into retaining the historical aspects of the old buildings, keeping the original stonework or woodwork where possible or replicating it. Several artefacts have been found for the museum though not as many as expected.

“This is a commercial venture of course for us but we have alternative motives too to educate visitors about the culture and history of St. Maarten and in the future to encourage reforestation.”

Currently some 50 to 60 employees are working on the Rain Forest project. Work on lower buildings has been contracted out separately to Liccom NV.

With cruise ship lines clamouring for new activities for their guests, it’s hard to imagine this project could not be a success for Government and the island’s tourism, a win-win situation for all concerned.