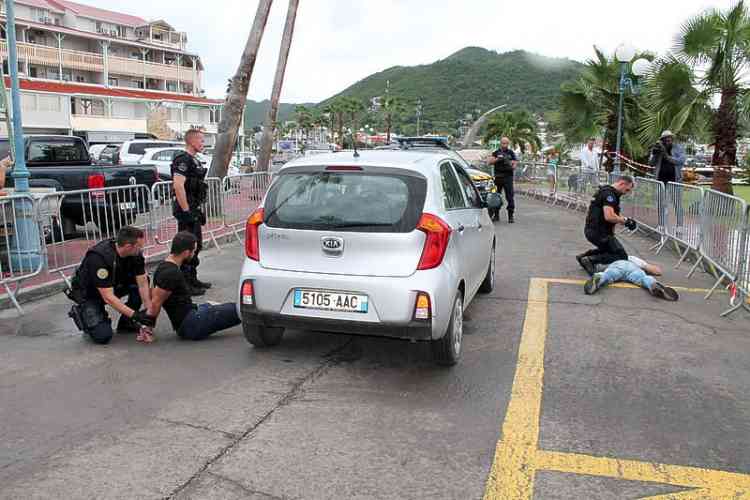 MARIGOT–Overcast skies and rain meant a smaller turnout than usual from the public for Saturday’s open day for the security forces compared to previous years.

Préfète Déléguée Sylvie Feucher and President of the Collectivité Daniel Gibbs were both present.

The Fire Brigade put one of its fire trucks on display. Children were seen taking a ride up in the cherry-picker pod of the truck’s long extendable ladder and were given explanations of how the controls for the hoses work on the truck. PAF officers explained their role in securing borders and detecting false documents.

The public, especially children, could inspect the motorbikes used by the Gendarmerie and Police. Equipment used in law enforcement such as Tasers and riot equipment were also on display.

Over on the dock, the public could have a tour of the French Customs vessel and see the SNSM’s rigid inflatable boat Rescue Star and the Gendarmerie’s patrol vessel from Brigade Nautique.

Highlights of this event were the demonstrations for the public. Gendarmes gave a demonstration of arresting two suspects from a car, pinning them to the ground and putting on the handcuffs. The canine unit also showed how a trained dog can sniff out drugs inside a car.

Customs vessel DF24 patrols in the St. Martin-St. Barths area with a crew of eight. Hervé, a member of the crew, explained that in total there are seven Customs patrol vessels in the French Antilles: three large vessels and four smaller high-speed vessels in Martinique and Guadeloupe.

One could visit the bridge, see the sleeping quarters and the Captain’s cabin, dining area, kitchen, and engine room.  A machine gun on deck is used mostly to fire a warning shot, not to kill. The vessel has two generators for electricity, one a back-up generator. The workshop on shore was destroyed during Hurricane Irma so a workshop space and equipment were put in the engine room’s available space.

DF24 was involved in a high-profile drugs seizure at sea two months ago. The smugglers attempted to set fire to their vessel and destroy the drugs. However, the Customs crew put out the fire and were still able to seize most of the drug haul.