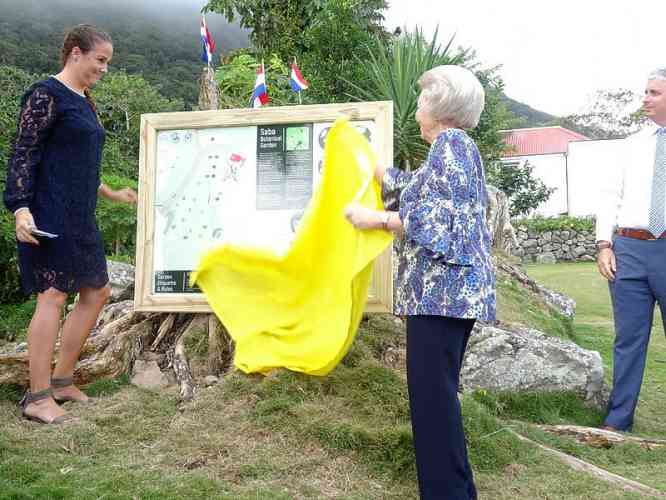 SABA–With a small delay and in the pouring rain, Princess Beatrix of the Netherlands landed in Saba on Thursday morning, December 12. Clad in a grey rain poncho, she emerged from Winair’s Twin Otter airplane and was greeted by Island Governor Jonathan Johnson and Island Secretary Tim Muller who both held an umbrella to shield her from the showers.

The start of the visit might have been rainy, but the weather was perfect the rest of the day and the Princess was obviously happy to be back in Saba.

Smiling, she took the bouquet of local flowers from young Kendra Gomez. She then walked over to a row of Sacred Heart School pupils who stood in the lounge area and started reciting a poem by teacher Camille Blackman. The Princess complimented the children and said they must have been studying hard because their performance was flawless.

The first stop after the princess’ arrival was Well’s Bay, where she took a short hike. With Nordic walking sticks and still dressed in the rain poncho, she walked the first part of the Mary’s Point trail. On her return from the short hike, she took off the poncho and then revealed the sign of the new Mary’s Point trail. The trail leads up to Mary’s Point, formerly Palmetto’s Point, an early settlement on Saba which was vacated in the 1980s.

Archaeologist Jay Haviser told the princess some details of the hardship of the people living at Palmetto’s Point/Mary’s Point, and how erosion is affecting the now-abandoned area. Isolation, tradition and survival were the key principles since the time of the Amerindians who came to Saba, said Haviser.

He explained that due to water shortages and heavy erosion in 1934, by government decision residents of Mary’s Point were relocated to the Promised Land and Hell’s Gate.

The Princess listened closely and asked questions. She said it was a most interesting story. She mentioned that the erosion in the area was very visible. She said the walk on the trail had been very special. She mentioned that many years ago she had also walked up Mount Scenery with her late husband Prince Claus.

The sun was shining by the time the princess and her delegation left for Fort Bay Harbour. At the harbour, the royal visitor received information about Saba Marine Park, Saba Bank, marine life conservation and sustainable fisheries from Ayumi Kuramae of Saba Conservation Foundation (SCF).

Fishermen Nicholas Johnson, Ivan Hassell and Augustino Hassell told the former queen and mother of King Willem-Alexander about their work and the importance of keeping a healthy fish stock. The fishermen showed some of their catch, consisting of large lobsters.

“She is very special for us. It was good to see her again,” said Ivan after his conversation with the princess.

“It was a big honour to have the chance to meet her. She asked questions about sustainable fisheries and we were able to tell her that it is very important to include us as stakeholders in this process,” said Nicholas.

Harbour master Travis Johnson and assistant harbour manager Leayle Hassell showed the princess the plan for the new harbour and explained to her why the new harbour will be built in the Black Rocks/Giles Quarter area, which mostly has to do with better wind directions, more space and easier access to build a future-proof harbour. The princess was eager to hear about the harbour developments, and here too she asked a number of questions.

After lunch, Princess Beatrix went to Windwardside where she met the Lace Ladies. Joyce McCoy and Angela Johnson gave an explanation about this traditional Saba craft.

The princess admired their work and said it looked beautiful, but difficult to do. She said the ladies did fantastic work and encouraged them to keep it up, also their endeavours to pass this tradition on to the younger people.

Policy advisor of the public entity Saba Nicole Johnson, who is also an SCF board member, and Director of the Saba Tourist Office Glenn Holm welcomed the Princess at the grounds of Harry L. Johnson Museum for the unveiling of the sign for the Botanical Garden project, the trail that will connect the Trail Shop to the museum grounds.

“The creation of a botanical garden is very special for us,” said Nicole, who explained that there will be many kinds of local fruit trees and medicinal plants. “By incorporating these local plants into the botanical garden, we ensure that they are there for generations to come, and that our children and their children will know the importance of these plants and trees, why they played such a large role in the daily lives of Sabans in the past and why they are still utilised today.

“This garden will provide many benefits, from the fruits it will produce, to the preservation of a piece of our culture, to a place where people can experience the tranquillity and beauty of our nature.”

She remarked that this project will contribute to promoting Saba as a green and sustainable tourism destination.

At the museum grounds, Princess Beatrix was greeted by many people, some of whom came to her, like Diana Madeira and Claire Johnson. “You are like a mother to us. You will always be in our hearts. We love you,” said Claire.

Madeira gave the princess a hug, telling her how grateful she was for the princess’ visit and how much she meant to the people.

She was provided with background information about the botanical garden and they talked about the use of natural medical products derived from herbs and plants, which played a big role in the past days.

The princess visited the museum for a few minutes where she was given a tour Marjorie Hassell, before going to the airport. But she was not quite yet ready to leave Saba, because she decided to walk up from Cove Bay to the airport, which she did with her Nordic walking sticks.

After the last handshakes, waves, and friendly words, she went into the aircraft, turning one last time to look at her beloved Saba and wave one more time.