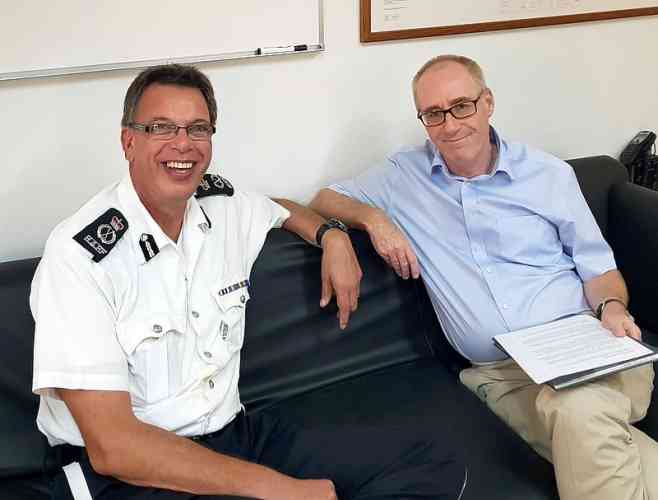 ANGUILLA–The Royal Anguilla Police Force (RAPF) is celebrating its annual Police Week this week, with several activities for the general public. It is the Force’s 46th Anniversary, having been founded in January 1972 when it took over policing from the London Metropolitan Force.

Governor of Anguilla Tim Foy in an address marking Police Week thanked the Commissioner and all ranks of the Force including the special constables and volunteers. He said that in the 46 years the police have shown dedication and professionalism. He especially thanked the officers and their families for their commitment following Hurricane Irma. He said in the past few years there has been much progress to establish a modern Force with new capabilities and skills.

The Governor stressed the importance of the police and the community working together and the responsibility of the public to support the police in their work. He urged everyone to join in the events during the week and celebrate with the officers of the RAPF. He closed by saying, “On behalf of the Governor’s Office, God Bless Anguilla and God Bless the RAPF.”

Commissioner of Police Paul Morrison was with the Governor when he gave his address and thanked him for that opportunity. He said that the police cannot be everywhere and they rely on the public to report crimes and whatever they see. He said the relationship with the community is built on trust and confidence and the police try to build this in many ways including during Police Week.

This year activities have been cut down but there are still many events for the public to attend. On Saturday, January 27, the finals of the Commissioner’s Domino Tournament were held. On Sunday, January 28, there was a church service at the Church of God Holiness. This was followed by a beach picnic and sports at Sandy Ground. On Monday there was a lecture by Phyllis Fleming-Banks for members of the Force. She spoke on “Continued Professional Development.”

Other activities include a Caribbean Food Fest on Tuesday and a Police Community Day on Wednesday that will include basketball competitions at Island Harbour, North Hill and The Valley. There is a lunch for Senior Citizens at Police Headquarters on Thursday. Activities on Friday include a bingo with a jackpot of EC $4,600 and a Back in Time Dance at the Red Dragon Disco. On Saturday there is a walk scheduled at 5:00am and karaoke at the Police