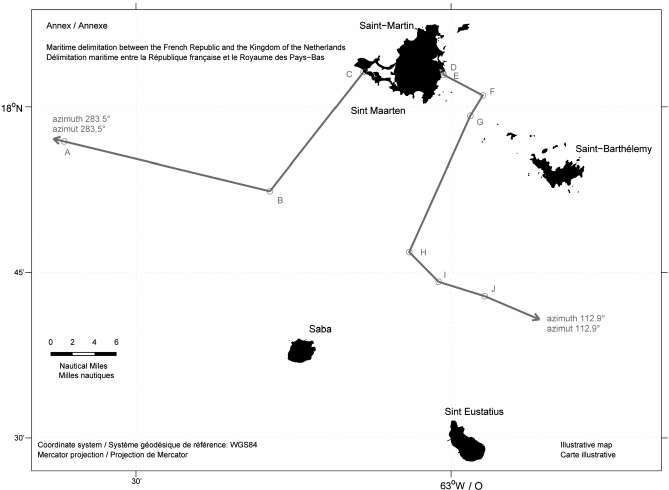 THE HAGUE–Tomorrow, Thursday, the Second Chamber of the Dutch Parliament will ratify the treaty to determine the sea border between French St. Martin and Dutch St. Maarten. The approval of the treaty between the Dutch Kingdom and the French Republic which was already signed in April 2016 is a formality.

On the invitation of the St. Maarten Government, the concluding negotiations for this treaty took place in Philipsburg late March 2015. On April 6, 2016, St. Maarten Prime Minister William Marlin and St. Martin Préfèt Anne Laubis signed the treaty on behalf of, respectively, the Kingdom of the Netherlands and the French Republic. The signing took place in Philipsburg.

The maritime demarcation secured in the treaty is based on equidistant lines, lines that are located on an equal distance, and lines that connect the coordinates which are determined in the common WGS 84 system. St. Eustatius and Saba were consulted in the process of establishing the delineation.

The delineation will provide St. Maarten, but also St. Eustatius and Saba, clarity on the geographic range of the countries’ sovereignty, of the rights and authorities of the Kingdom in the area of the Windward Islands at sea, which is of importance for the protection of the maritime environment and fisheries management, but also for the Dutch Caribbean Coast Guard to carry out its task, explained Minister of Foreign Affairs Bert Koenders in the documents that accompanied the proposal to ratify the treaty.

The delineation is a central part of the so-called “Windward Islands box,” the total of sea borders and delineations between the Dutch Kingdom and the Northern Caribbean neighbouring states. Currently there is only one treaty of March 1978 between the Kingdom and the Republic Venezuela that secures the small delineation with Venezuela south of Saba. France for St. Martin and the United Kingdom (UK) for Anguilla signed a maritime border treaty in 1996.

Several treaties are in preparation to arrive at a formal delineation for the Windward Islands/North Eastern Caribbean. The negotiations with St. Kitts and Nevis are nearing conclusion and the signing of a treaty imminent, announced Koenders. Negotiations are also ongoing between the UK and the United States (US) to establish the delineation between Anguilla and the US Virgin Islands.

The western demarcation in the treaty between the Dutch Kingdom and Republic of France for St. Maarten/St. Martin consists of a equidistant line indicated by three coordinates. The western line will be connected to the yet to be established delineation with the UK for Anguilla. When the Dutch Kingdom and the UK have arrived at this delineation, the tri-point on the western side will be determined, meaning the point where the three neighbouring states will come together.

The first exploring talks to establish a maritime border between the Dutch Kingdom and the French Republic for St. Maarten/St. Martin took place in the late nineties, but were suspended for several years and only until late 2014 it became clear that these negotiations could be successfully concluded.

In the process of the handling by the Permanent Committee for Foreign Affairs, the Party for Freedom PVV asked why the negotiations had taken so long. Minister Koenders stated that this was mainly due to the fact that the parties involved didn’t consider it an issue of high priority.

In response to a question by the liberal democratic VVD party regarding the treaty with the UK for Anguilla, Koenders explained that the UK had requested some time ago to start the negotiations regarding the sea border on the west side of St. Maarten. It was decided not to honour this request because at this point in time it was considered better to first establish the sea borders with the French Republic and with St. Kitts and Nevis. “After that the border with the UK will be deal with,” stated the Minister.