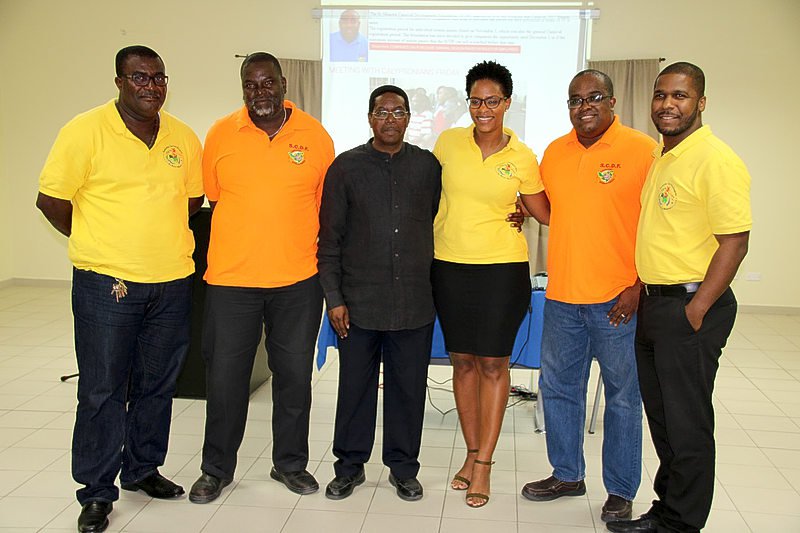 Raw Promotions with representatives of the Dutch- and French-side Carnival committees during the launch of www.rawpromotions-tv.com on Friday night.

www.rawpromotions-tv.com on Friday evening. The website presents calypso news and profiles of the island’s entertainers.

Calypso lovers will see the revival of two calypso tents in 2017, first in Carnival Village in Galisbay, Marigot, on February 21 and the second under the tent at Princess Port de Plaisance on March 18, featuring calypsonians who will be participating in the 2017 NAGICO Calypso Competition,

The website will allow radio stations and persons around the world to see the latest news concerning calypso on the island. He said his organisation was also looking into the possibility of having the Calypso monarch perform in other countries’ calypso shows as a guest artiste.

Raw Promotions will be introducing a Hall of Fame soon that will pay homage to persons who contributed to the art of calypso in any way. “This will not only be for performers, but musicians and DJs, etc. I encourage everyone to visit the website and share it with friends. Radio stations are welcome to get songs from calypso artistes from this year’s competition and songs dating back to 1973,” Clark said.

SCDF continues to build on one of its core principles; to involve as many stakeholders as possible in the organisation and growth of St. Maarten’s Carnival product.

Richardson said he looked forward to hosting the first calypso tent on the French side of the island in February.