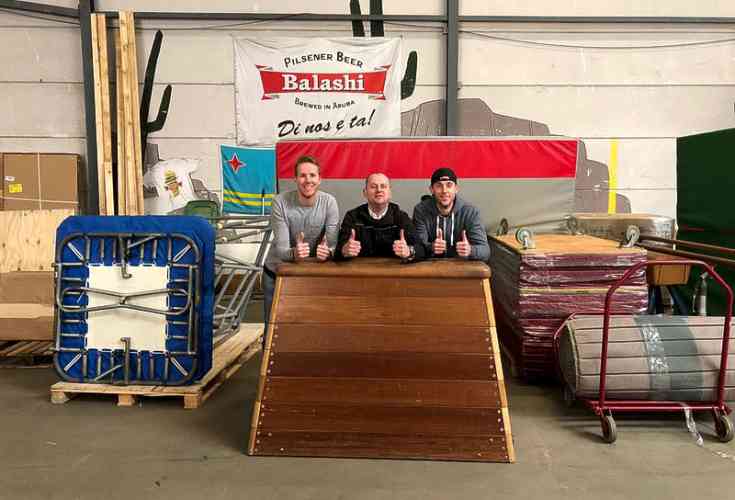 Jisk Goslinga (left) and Cyriel Pfennings-Richardson (right) of RebuildSXM and Stefan Groothuis of Sports for Children (centre) with some of the gymnastics equipment before it was placed in a container that left for St. Maarten.

Some of the boxes that went into the RebuildSXM container with material for schools and sports organisations in St. Maarten.

ROTTERDAM–Schools and sports organisations can look forward to a sizable donation from RebuildSXM, a non-profit organisation in the Netherlands with St. Maarten roots. A forty-foot container filled with goods for the young people on the island, left Rotterdam on Monday and should arrive on St. Maarten around March 12.

Volunteers of RebuildSXM, headed by Cyriel Pfennings-Richardson and John Sandiford, stacked and closed the container last week mostly with sports equipment and educational material for all seven public primary schools in St. Maarten, as well as for several playschools, secondary schools and sports organisations.

The large donation is the result of months of collecting funds. The Foundation RebuildSXM was founded after Hurricane Irma hit the island in September last year, by young professionals from St. Maarten residing in the Netherlands. So far, the foundation has collected some 65,000 euros. The container that is now on its way to St. Maarten is the first large donation and more are to follow.

“After seeing the devastating images on the Internet a tremendous number of people sprang into action, often not even having ties to the islands. We have received donations from people all over the world. From primary school children baking cookies and swimming and cycling sports associations to choreographers giving workshops, many people have dedicated their time to helping those affected by Hurricane Irma.Without the help of everyone involved, this would not have been possible,” Pfennings-Richardson told The Daily Herald.

RebuildSXM wants to especially help the youngsters in St. Maarten in an effective, direct and personal way. That is why members of the team conducted assessments based on the current needs after the initial help had passed. While on the island during the holidays, Jisk Goslinga and Pfennings-Richardson went to several schools, playschools and sports organisations to ask what they needed.

“We wanted to use the first milestone of having collected 50,000 euros for the young people with a personal touch. We specifically looked at the wishes of the schools and organisations,” Pfennings-Richardson said.

“Some have asked why we have waited this long before jumping into action. We’ve learnt from the aftermath of Hurricane Luis, which saw a large influx of help after the hurricane. However, that quickly subsided. The items we have bought were all decided upon by the schools and organisations themselves. That took some time to organise,” said John Sandiford.

Purchased and collected in the Netherlands were a wide variety of sports material and equipment, ranging from all sorts of balls for the different sports, tennis rackets and boxing gloves to different pieces of gymnastics equipment, portable basketball rims and large mats. Also purchased on specific request were school materials for Sundial School and play material for playschools.

Sports store Decathlon contributed to the donation. “At Decathlon we strive to make sports accessible to as many people as possible, and it gives us a very satisfying feeling to be able to help the children of St. Maarten practise the sports they love,” said Goslinga, who works at Decathlon. Educational and play materials were purchased at Action.

The Dutch foundation Sports for Children played an instrumental role. The foundation, which has gymnastics champion Epke Zonderland as its ambassador, offered to supply a large quantity of gymnastics equipment from its warehouse, including a buck, balance beam, trampoline and thick mats.

A special aspect of the RebuildSXM donation is the destination of the 40-foot container in which the goods are being transported. The container will be used as the new clubhouse of the St. Maarten Little League.

Little League coach Tom Burnett had indicated that the organisation, which works with many children, needed a new clubhouse after the hurricane for its player development programme. RebuildSXM decided to purchase the container and place it at the location of the Little League Ball Park.

The donated and collected goods were stored at Essex Freight in Ridderkerk near Rotterdam until the container was ready for shipping. Pfennings-Richardson said he was happy with the help of this company which charged at a lower rate.

The container is expected to arrive in St. Maarten on or around March 12. Pfennings-Richardson, Sandiford and Goslinga will be travelling to St. Maarten at their own cost to personally supervise the unloading and distribution of the goods. Several volunteers on the island have already offered to lend a hand.

RebuildSXM will not stop here with its assistance for St. Maarten. “Our objective is to collect up to 100,000 euros so we can arrange more donations in the future. We are hoping for more sponsors and we will be raising funds through various events. Large companies in the Netherlands have already shown interest,” said Pfennings-Richardson.

In the coming months several members of the RebuildSXM team will be going to St. Maarten, at which time they will make an inventory of further assistance needed. Extra sports materials, including basketballs, will be distributed in the neighbourhoods.

RebuildSXM is looking at other ways to help stimulate St. Maarten’s economy and to assist the vulnerable younger ones in society. RebuildSXM has also collected funds on behalf of St. Eustatius and Saba. Contact has been established with these two islands to determine how the organisation can assist them.

The organisation works in a transparent manner. All steps in the donations are photographed and filmed, and made available to the public. The first annual account will be posted on the

www.rebuildsxm.com website shortly so everyone can see how the funds are spent.