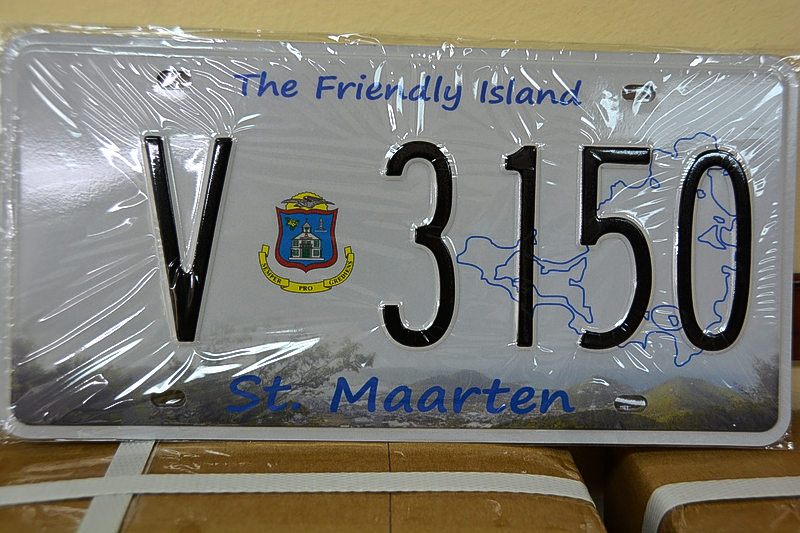 PHILIPSBURG–Receiver Minerva Gumbs on Monday issued a call on persons who purchase new vehicles to consider buying their 2017 number plates based on their existing plates, rather than buying new plates with a completely different number.

Gumbs said on Monday that many new vehicle owners opt to buy new plates rather than using their existing plates on their new vehicles which, when combined with vehicle leasing companies, buying new plates for leased vehicles, while their clients already have existing plates, creates a problem with the supply of plates on the island. “Many persons don’t want to use their old plates on their new cars and it is creating a problem,” she told The Daily Herald.

She said while this problem usually occurs annually, it has never been as dire as it is this year. The running out of new plates, she said, could also be due to the fact that the 2017 plates were ready very early this year compared to last year and previous years.

The Receiver’s Office won’t get a clear picture on the number of excess plates available until after the deadline has passed and they can see then how many pairs of plates were not purchased.

Regarding new vehicle owners, she said persons who no longer need their number plates because they are switching from one category plate to the next, can inform the Receiver’s Office that they no longer have use for their old plates and give permission for their plates to then be sold to someone else. Switching plates can occur if a vehicle owner, for example, had a car with a P or M plate and now owns a truck which carries a V plate.

In the meantime, the Receiver’s Office will be open on Saturday, February 25, and on Saturday, March 4, from 9:00am to 2:00pm. The February 25 opening is to accommodate persons who want to make their payment before the deadline and the March 4 opening is specifically to accommodate persons who have temporary plates and want to switch to obtain permanent plates. Extra R plates that are brought in are usually given as temporary plates.

The price for the number plate is NAf. 12.50 for all types of vehicles, and NAf. 7.50 for motorbikes. Motorists with number plates M, P, SXM, MR (ministers) and PAR (Parliament) will pay NAf. 275 in motor vehicle tax for gasoline-operated vehicles and NAf. 750 for diesel fuel-operated ones.

A valid insurance document and inspection card are needed for payment to be processed.