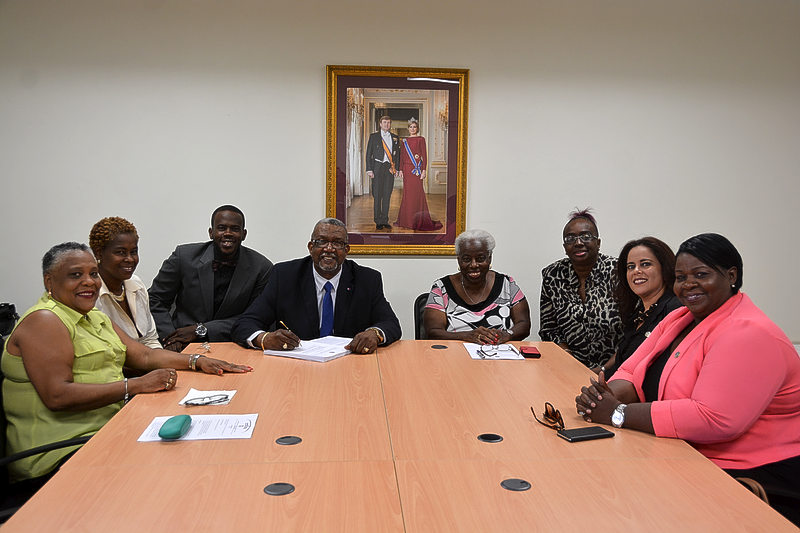 PHILIPSBURG–A major stride forward was made in the interest of the Police Force on Friday when Justice Minister Edson Kirindongo, the various unions representing police officers and the advisory body on matters related to civil servants GOA signed the long-awaited “rechtspositie” to regulate officers’ legal status and position and to ensure that they are placed in their correct salary scales.

The signing comes after six years of lobbying spanning several Ministers and several presidents of some of the unions involved. Also signed on Friday was a document between the Minister and unions urging the Justice Minister who comes into office following next month’s parliamentary election to adhere to the stipulations in the rechtspositie.
Signing the document with Kirindongo on Friday were representatives of the Nationale Algemene Politie Bond (NAPB) St. Maarten police union, Windward Islands Civil Servants/Private Sector Union (WICSU/PSU), ABVO/St. Maarten union and GOA.
Kirindongo said the signed documents now have to go to the Council of Advice and then to the Governor for signing after which they will go into effect. He was elated with the milestone reached with the signing.
Once this part of the process has been finalised, a Placement Committee and an Appeals Committee will have to be put in place to oversee the process. The Placement Committee will comprise seven persons: one member from each of the unions involved and four persons assigned by the Minister (Secretary, Acting Secretary, Legal Advisor and Chairperson).
“Words cannot express how I feel,” Kirindongo told The Daily Herald at a celebratory luncheon with the unions after the signing. “This was supposed to have been done since 10/10/10. I do not want to point fingers, but without this in place nothing can be in place for the police regarding their positions.”
He gave insight into the volume of work that had gone into finalising this issue. He said initially parties had been meeting every two weeks and at one point, after meeting with GOA, he had asked parties whether they could work daily for two to three months to finalise it. He said work even had been done on weekends.
“I really wanted this to be finalised,” he said. “It was a tough job, but now at least we have something finalised on paper with the blessings of the GOA and the blessings of all the unions.”
NAPB President Jeanine Peterson said all the unions involved were “pleased” and “very happy” with this development and noted that the unions had struggled and lobbied very hard and long to achieve this milestone for the country’s men and women in blue.
She said that when she became president she had pledged to get certain things in place for the administrative workers of the Police Force and she was happy this now had been realised. The signing of the document paves the way for officers to finally be placed in their correct salary scales and be placed in their correct positions.
“There are many issues with back-pay and with this document the process can now move forward. … We would like to recognise this milestone reached with the signing of the rechtspositie,” she said.
Peterson thanked everyone who had been involved in making the rechtspositie a reality, including the Minister for his efforts in seeing the process through to the end and being committed to its finalisation. She also thanked GOA Vice-President Prudence Hodge, NAPB advisor Carlyle Rogers, a former president and the first NAPB president, and all the other unions that had been involved in the process including NAPB members.