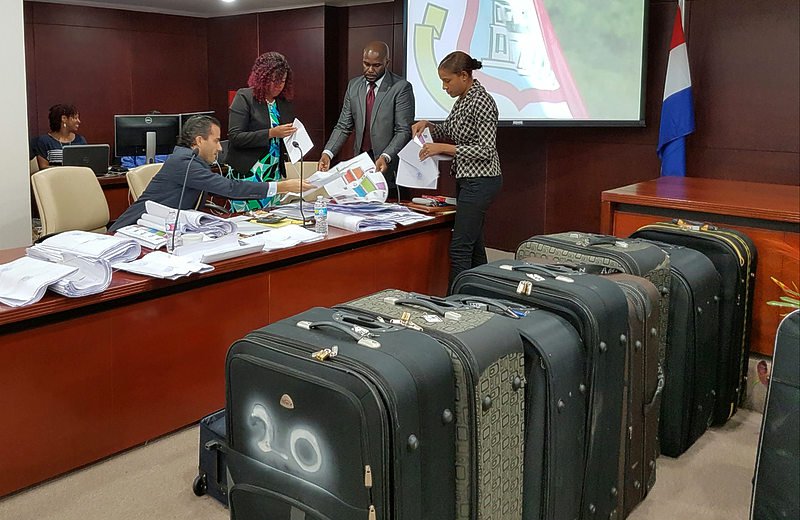 PHILIPSBURG–The full recount of all twenty polling stations by the Central Voting Bureau did not change the seat allocation to the four largest parties that emerged from the September 26 Parliamentary election. However, changes were made to the party totals and the individual counts for several candidates.

Voter turnout was two per cent lower than the preliminary count to stand at 65 per cent.
The number of eligible voters for the election was 22,302.

The United People’s (UP) party and National Alliance (NA) both remain with the five seats captured in the election, United St. Maarten Party (US Party) with three seats and Democratic Party (DP) two seats.

UP gained five votes in the recount, DP three and PPA five. Losing votes were OSPP (one), NA (five), SMCP (eight) and US Party (12). The other two parties’ counts remained the same – SDM at 346 votes and HOPE at 75.

The Bureau decided on Monday to perform a full recount of all 20 polling stations due to a number of discrepancies found on the official reports from the stations. The decision was taken at the start of its public sitting to validate the results of the election.

A major discrepancy was that one person who had been “de-registered” from the Civil Registry cast a ballot before the error was discovered. The Bureau investigated the matter and found it was an isolated incident. The unregistered voter was also heard in the investigation.

Responding to a request from DP and SMCP to make public all official reports from the polling stations, Bureau Chairman Jason Rogers said this was not necessary as the official report of the meeting that started on Monday would be made public as prescribed by law.

Rogers ended the session around 2:30am by saying of the election results: “St. Maarten has spoken.”

The recount finally ended around 1:00am Wednesday and the final figures were given out by the Bureau close to 2:00am. The first five polling stations were counted on Monday and the remaining 15 were completed in a marathon session that started around 9:00am Tuesday and ended at minutes to 1:00am Wednesday.

Representatives of only three parties that contested the election were present in Parliament House for the end of the ballot recount along with the Bureau. Represented were DP with the largest contingent, SMCP and UP.

The recount was a strenuous task for Bureau Chairman Jason Rogers in particular, who had to call out the name of each candidate for whom a ballot had been cast. This amounted to his saying the name of one of the 125 candidates at least twice in the perusal of the some 14,856 total ballots cast (including invalid ones).

The majority of spoiled ballots appeared to be from voters who had intended to support UP. However, the voters rendered their ballots invalid by colouring red everywhere else but the legally mandated white circle. Some coloured the circles of more than one candidate; for example, a few people voted for both Heyligers on the party’s slate or voted with an “X” behind a candidate’s name, among other snafus.

Slowing down the process was the state of ballots cast at Polling Station #8 – St. Maarten Academy. When the suitcase containing the ballots was opened it was found that station staff had failed to properly package and label the stack of ballots for each party.

Instead of opening and stacking ballots per party, folding each stack in half and then wrapping each stack individually in brown paper, the station staff had taken the time to refold the some 1,149 ballots in quarters. The Bureau members, assisted by Angelica Granger of the Civil Registry, had to reopen and stack each ballot before the recount could continue on Tuesday morning.