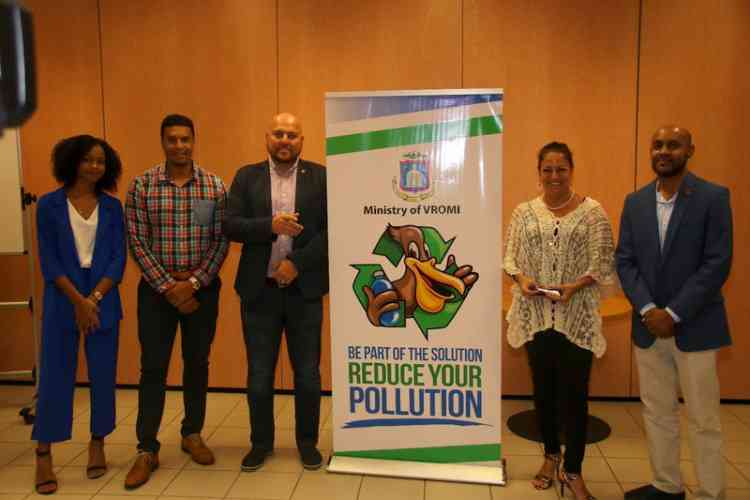 PHILIPSBURG–The Ministry of Public Housing, Spatial Planning, Environment and Infrastructure VROMI held a reception at the Government Administration Building in Philipsburg on Saturday, November 30, where the winner of its clean-up and recycling slogan competition was announced and the campaign song was officially released.

According to a VROMI press release, the campaign is a strategy implemented by the ministry to encourage citizens and visitors to “do their part in keeping St. Maarten clean.”

“A slogan is what makes a campaign memorable. Therefore, we are requesting the help of the public in creating a slogan for the upcoming clean-up and recycling campaign,” said VROMI in the competition poster.

Entrants had until October 28 to submit their slogans to VROMI. There were more than 250 entrants in total.

The winning slogan, submitted by Lisa Freeland, was “Be a part of the solution, reduce your pollution.” At the reception, she received a plaque from VROMI Minister Chris Wever for her efforts.

Freeland gave a brief explanation about how she came up with the slogan and thanked VROMI for the initiative. Afterwards, the ministry unveiled the poster, which bears the words of the winning slogan and the recycling emblem.

Reigning four-time Power Soca Monarch Darin “King Vers” Hodge was tasked with composing and producing the campaign’s song. The song was officially released during the reception in the presence of the attendees, among them independent Member of Parliament (MP) Chanel Brownbill. In its lyrics, the song reflects the campaign’s slogan.

In an address to those in attendance, Wever said the campaign had been established to instil “a pride of cleanliness in our people” and to encourage and promote recycling, “starting right here at the government administration building”.

“The campaign is an ongoing project of the [VROMI – Ed.] ministry. The campaign song is expected to be played on all local radio stations, while a 30-second jingle is in the making,” said Wever.

King Vers addressed the crowd as well, explaining how the song was composed. He thanked D Kullus, Tamilia Chance, and Kenyo Baly, who assisted in making the song a reality by providing background vocals, rhythm, beats and melody.

“The campaign is expected to yield positive results while we all play our role in keeping St. Maarten clean,” said VROMI in a press release.