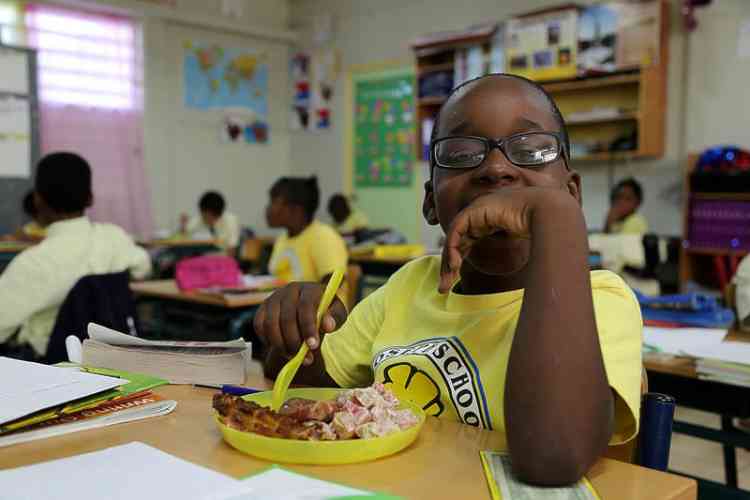 SIMPSON BAY–Six months after Hurricane Irma, the St. Maarten branch of the Netherlands Red Cross on Monday re-affirmed its commitment to helping to rebuild St. Maarten by delivering its 500,000th meal to hurricane-affected children.

“This is but one example of our long-term commitment to the people of St. Maarten,” said Netherlands Red Cross head of mission Michele Rezza Sanchez. “Not only have we provided half a million meals through our school feeding programme, we recently extended the programme by three months and are now expanding it to include 177 students at six secondary schools.”

Red Cross staff have provided nutritional breakfasts and hot lunches to an overall average of 3,350 students in 18 primary schools since October 2017. As part of its response to Hurricane Irma, and in collaboration with the Government and communities themselves, the Red Cross has also distributed more than 11,000 food vouchers to families in need.
A Waste to Work project was recently launched which will engage local entrepreneurs in recycling hurricane and humanitarian-generated waste to create sellable products, and 2,000 households will receive materials and technical expertise to support them in the rebuilding of their damaged homes.

With the 2018 hurricane season just months away, the Red Cross is looking towards the future and is working with communities to ensure they are well-prepared for emergencies.
“We are now in the process of creating community-based disaster response teams in the nine neighbourhoods where we are working,” said Red Cross St. Maarten Nadjesca Gumbs branch manager. “These teams will be made up of people who live in these communities. After receiving training, they will be the first to respond when there is an emergency.”

The programmes are being financed by donations raised through a public fundraising campaign that was launched in the Netherlands immediately following Hurricane Irma. The US $21 million that was donated helped kickstart Red Cross emergency operations in September 2017 and now supports longer-term recovery. Included in that is funding from the Dutch Ministry of the Interior and Kingdom Relations which is supporting the extension of the school feeding program and the Waste to Work project.